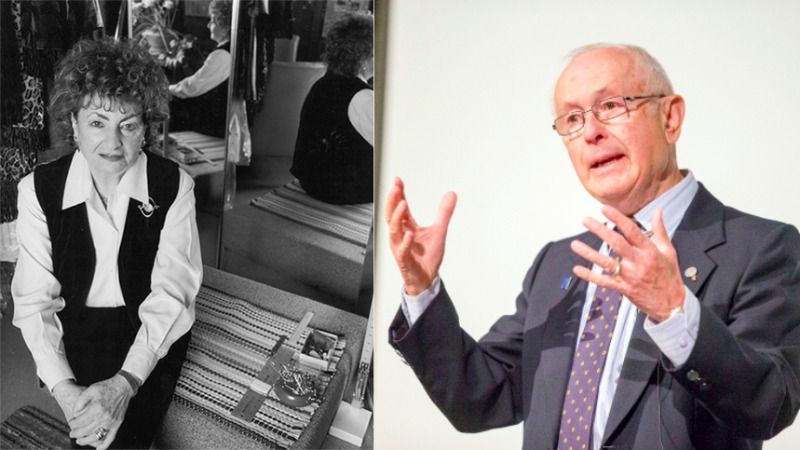 On Wednesday, March 29, middle and high school (grades 6-12) students will have the opportunity to personally meet and hear the life stories of Holocaust Survivors during a Week of Understanding event co-sponsored by the Institute for Holocaust Education (Omaha) and Nebraska Educational Service Unit 2.

Survivors will be speaking live from the Wahoo Public Schools Performance-Learning Center, 2201 N. Locust Street. However, with the power of videoconferencing technology, audiences may connect from any school location!

Respecting the age of Holocaust survivors, as well as the emotional exhaustion of recounting their experiences, two speakers will share their personal stories and respond to audience questions.

Now in its seventh year, this important IHE program began as an effort to bring first-hand Holocaust survivor and U.S. liberator testimony to schools across the metro, giving students the opportunity to hear this testimony while survivors and liberators are still here to tell their stories.

When ESU 2 became involved in 2012, second program year, the geographic reach expanded beyond metropolitan Nebraska schools to include not only live student audiences traveling to Wahoo but also school audiences connecting via video conferencing technologies from the rural east, central and panhandle regions of Nebraska.

“As time takes us away from the Holocaust, it is even more critical to listen to the words of the witnesses,” said Liz Feldstern, IHE executive director. “Their personal stories add a face and a name to a distant and somewhat incomprehensible event. Not all survivors can speak about their experiences. Some want only to remember their memories silently, but for Sonia and Robbie, and others like them, there is a need to speak out.

“These individuals, and others like them, are the last to bear witness to the Holocaust. It has never been more important to listen to the words of this generation.”

rew up in Międzyrzec, Poland. She was 17 years old in 1942, when the Germans forced her and her family into the ghetto where she worked as a slave laborer.

When the ghetto was liquidated, Sonia and her mother were deported to the Majdanek death camp. At 15 she watched her mother disappear behind gas chamber doors. Her teenage years were a blur of concentration camps and death marches.

Sonia was sent to Auschwitz-Birkenau and then to Bergen-Belsen where the British liberated her. At the Bergen-Belsen displaced persons camp she met her husband John. The couple came to Kansas City in 1948.

Standing tall at 4’8″, Sonia is one of the last remaining Holocaust survivors in Kansas City and one of the only survivors there who speaks publicly about her wartime experience. She is 90-something years old.

Warshawski is the subject of the 2016 documentary feature film Big Sonia (Inflatable Film), which explores what it means to be a survivor and how this affects families and generations.

Robbie Waisman was born in Skarzysko, Poland in 1931, the youngest of six children in a very close-knit family. During the Holocaust, his entire family was murdered except for his sister Leah.

At age 10, Robbie was a slave laborer in a German munitions factory. Eventually, Robbie was sent to Buchenwald, where he was liberated by the American army on April 11, 1945. He spent the next four years in France recovering and catching up on his schooling.

In 1949, Robbie, a war orphan, came to Calgary, where he settled and eventually married his wife, Gloria Lyons. They moved to Saskatoon in 1959. There Robbie, an accountant, owned and operated three clothing stores, raised two children, and was very involved in the Jewish community.

In 1977, his family moved to Vancouver. In 1983, Robbie called the Vancouver Holocaust Centre Society and asked, “Can I help? … I am outraged at James Keegstra, the Alberta teacher who taught his students there was no Holocaust. ... I am a survivor of Buchenwald.”

Waisman is one of the subjects of the 2002 documentary film The Boys of Buchenwald (Papery Films).

In photo at left, newly arrived prisoners lined up for registration in Buchenwald Concentration Camp.

Robbie Waisman was sent to Buchenwald in 1944 at age 13. He and his brother, Abe, were placed in Block B with Polish, French and German political prisoners.