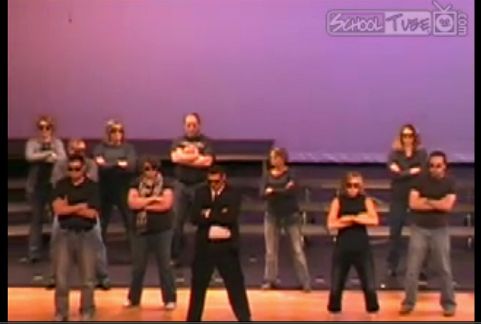 As a “kick-off” for the NeSA testing to be held for three weeks in April, the staff of Wahoo High School performed a Flash Mob for the high school student body on Tuesday, April 10.

WHS Vocal Music Director Julie Anderson choreographed the Mob. The staff danced to Will Smith’s “Nod Your Head!” from the famed Men In Black II movie.

High School Principal Jason Libal stated that he felt the Flash Mob was a tremendous success.

“The student body seemed to really enjoy watching the staff having a great time on stage. It was extremely positive to model the philosophy of working hard and having fun at the same time,” Libal commented. “Lastly, this was a great team building experience for our staff. The time we spent together rehearsing was a blast!”

The WHS staff looks forward to the junior class giving 110 percent on their upcoming assessments, and knows that those efforts will correlate into strong results.