Students in Kyle Weyers' welding class at Wahoo High School take advantage of welding equipment to acquire skills in the craft. At least 14 students have used the equipment to earn college credits through Southeast Community College. 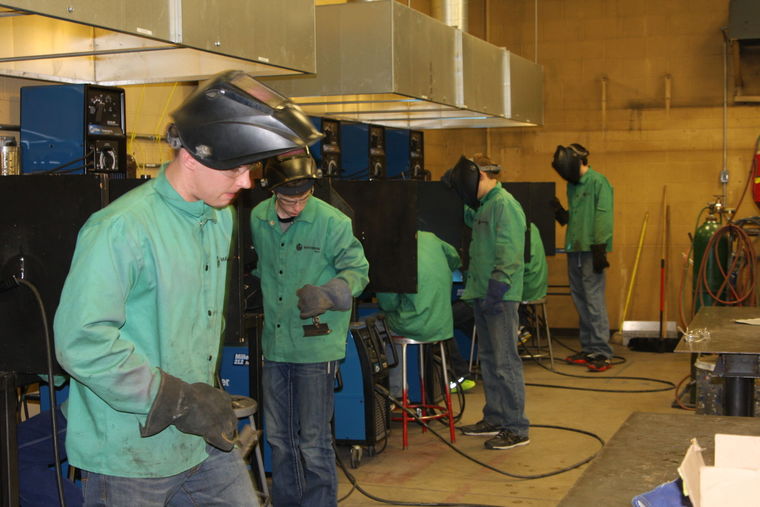 Students in Kyle Weyers' welding class at Wahoo High School take advantage of welding equipment to acquire skills in the craft. At least 14 students have used the equipment to earn college credits through Southeast Community College.

Demand for welders on the rise

A need for skilled welders in Nebraska has a few area schools adding equipment and beefing up the their industrial arts curriculum.

A welding shortage is being experienced all across the state. According to the Nebraska Department of Labor, the demand for welders is expected to increase by more than 6 percent by 2018. The Department of Labor estimated approximately 10,000 of the workers will be needed just to meet the demand in Nebraska.

“With the current generation of baby boomers retiring, and the jobs that went to China starting to return, the demand for skilled labor is there,” Weyers said. “I think businesses found that with the work from China, the quality just wasn’t there. So, they are willing to bring them back and pay workers more.”

“And then you hear about guys making as much as $100,000 a year welding on the pipelines. That’s where a lot of the work is, on the pipelines. I have one student that is going on to Lincoln School of Technology in Denver, and he plans to go on to the pipelines after that.”

A partnership program between Wahoo High School and Southeast Community College is taking an proactive approach to getting students connected to their future careers.

The program allows Wahoo students to earn college credits by taking advanced placement courses in welding. It is now in its second year.

Weyers said the program is popular with students. It was made possible when the Wahoo Board of Education two years ago approved the purchase of new, modern welding equipment.

Weyers said as a part of the school’s involvement with the Southeast Nebraska Career Academy Partnership, he invited SCC officials to Wahoo. They conducted a needs assessment and made recommendations about the type of equipment needed.

As a result, the school purchased eight new arc welders, eight mig welders, one combination mig stick welder and a CNC plasma-cutting table that is operated by computer.

They designed welding stations and the Fab Shop built the stations.

“The Fab Shop has been awesome,” Weyers said of the Wahoo business. “They built our stations at cost, and they donate a lot of the metal we use to practice welding. They’ve been great to work with.”

Student interest has been strong, and the number of students continues to rise, he said.

“We have 35 to 45 kids using the machines,” he said. “Kids get excited. They see the shiny new machines and people using them, and they want to learn.”

Weyers said last year he had four kids earning college credits through their studies at the high school. This year, that number grew by an additional nine for a total of 14. He only expects to see that number to grow.

Tim Fair, plant manager for the Fab Shop, said he’s glad to see the school partnering with SCC, and he is happy to help the school when he can.

“It certainly helps us with the shortage of labor,” he said. “And it’s one thing we can do to help the school out.”

He agreed that the retirement of the older generation has taken a toll on the supply of qualified welders.

“I’m really glad to see the high schools training the kids in the trades,” he said. “I think that’s something hasn’t been done for too long. You can make a good living in the trades.”

Getting experienced workers right out of school also benefits the business, he said. While new employees will always need some training in the way any given company does its unique work, a sound educational base is good.

He said he recently gave a tour of his facility to a group of East Butler High School students, and they were surprised to learn of opportunities and of the amount of money a certified welder can earn.

“They asked a lot of goods questions,” he said. “But of course, they want to know how much money they will make. They were surprised when I told them the amount of money they can earn. I told them they can come to a business like this, without a student loan, and they can make a really good living.”

The East Butler Board of Education at its March 11 meeting approved the purchase of new welding equipment to train students and help fill what appears to be a need that will grow in the future.

East Butler Vocational/Ag Instructor Whitney Lehn had appeared at the board’s previous meetings and also explained the demand for welders and the opportunities that could be given to East Butler students with modern welding equipment.

Demand for welders on the rise