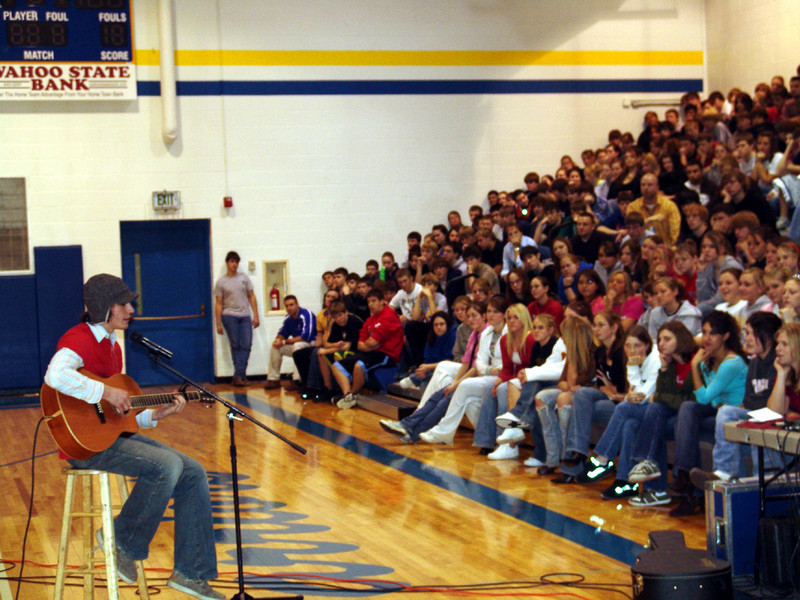 The January 10 Assembly Caused Students to Laugh, Listen, and Cry during an Important Message

On January 10, 2007, Wahoo Middle and High School students gathered in the gym for one of the most meaningful assemblies yet.

Mike Donahue of r5 Productions brought energy and humor to the stage that got his message across in a way that was different from any other assembly.

Donahue tried to relate to students instead of just lecturing, and believes it might be more effective than just yelling some catch phrase like "Just Say NO!" or "Hugs are better than drugs!"

He showed blogs and testimonials of other students with the same problems the students at Wahoo Middle and High School have. He explained that he had a hard time in high school, too. 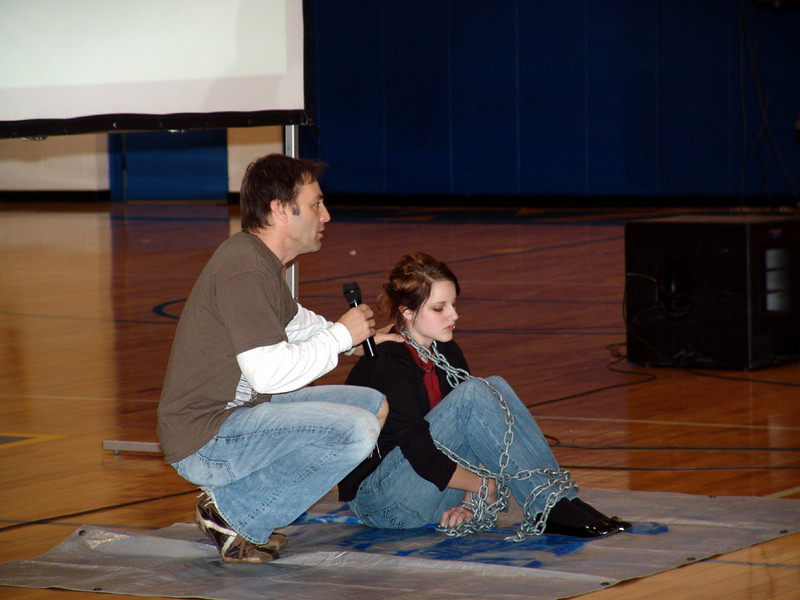 Donahue showed that he can relate to teenagers' problems and talked about how everyone has their own chains that they carry around every day--chains that prevent them from realizing their dreams.

Donahue also talked about how stereotypes play a big role in teenagers' lives. He said that by the way that you look, dress, by the people you hang out with, or even by who your parents are, you can be generalized and put in a category.

Once stereotyped, students are often "handed a script." This script represents the life path others expect you to take because you are who you are.

Donahue encouraged students to rewrite their script--blaze their own trail.

His hope for all students is to have a dream and work to make that dream come true, no matter what that old script is. r5 member Jordan Brandt sang "Better Together" by Jack Johnson followed by his own version of "Somewhere Over The Rainbow."

Afterward, Donahue pointed to a tarp on the floor that he made for students at WHS saying "NO ONE IN THIS SCHOOL BELONGS IN A BOX."

Donahue had another r5 member, Amber, chained and sitting on the tarp and asked, "If she were a student at WHS, would anyone help her?"

WHS juniors and seniors came out of the bleachers to help her break out of her chains.

To conclude the assembly, Donahue invited the juniors and seniors to sign the tarp and write their dream under their signature. The tarp hangs in the high school commons area.

"The assembly was awesome," said sophomore Brittany Barker. "It affected me a lot. They knew exactly what to say to connect with students."

"I am extremely pleased with how our students responded to the message," said WHS Principal Chris Arent. "We are looking at the most appropriate way to follow up and will be making some decisions soon."