The Governor spoke at WHS at the assembly in recognition of Dave Heineman Day. 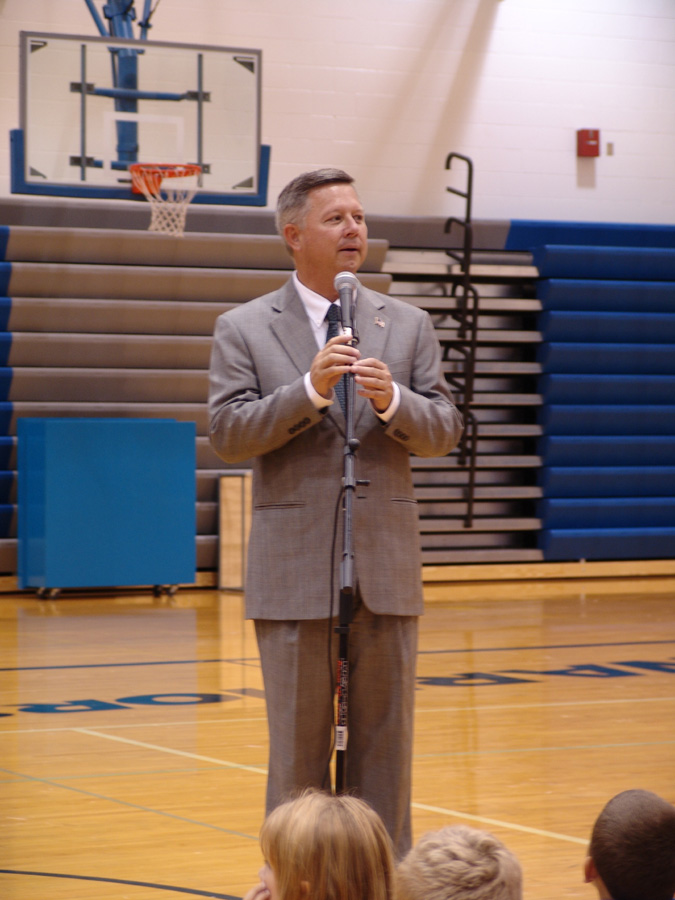 Launch the media gallery 1 player
The Governor spoke at WHS at the assembly in recognition of Dave Heineman Day.

Wahoo Public Schools honors one of Its own

'I am very, very proud to call Wahoo home.'

Nebraska Governor Dave Heineman took some time to return to his roots on Wednesday, September 21, 2005. On this day, the proclaimed Dave Heineman Day, he visited the town of Wahoo and its people and schools.

At 9:00 a.m., Heineman began the day with a stop at Bishop Neumann High School, and then downtown to the corner of 5th and Linden. Here, Mayor Daryl Reitmajer welcomed Heineman back to Wahoo and presented him with a key to the city in honor of his many accomplishments.

The final stop for the day was Wahoo High School. Here the entire WPS student body, kindergarten through twelfth grade, piled into the gymnasium to hear Heineman say a few words. In his speech, he focused on the fact that even a person from a small town in the middle of Nebraska can go far with a little determination and hard work. 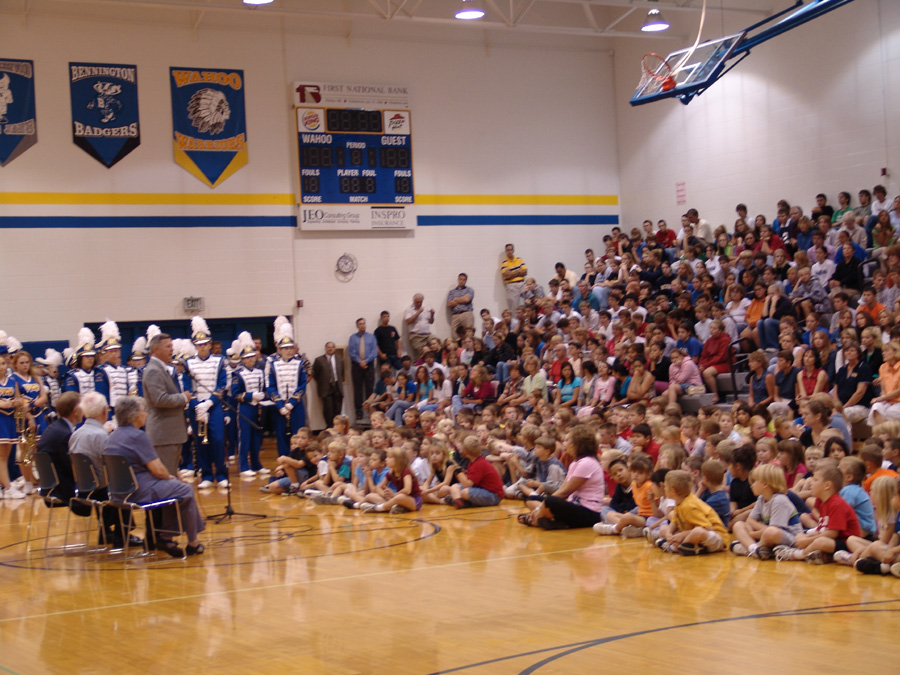 Launch the media gallery 2 player
The entire student body of Wahoo Public Schools attended the assembly honoring Governor Heineman.
"The reason I'm governor today . . . is because of the extraordinary outstanding education I got at Wahoo High School," Heineman proclaimed.

Preceding the speech, WPS Superintendent Ed Rastovski presented Heineman with a plaque signifying his induction into the newly established Wahoo Hall of Fame. Others included in the Hall are the five famous sons of Wahoo.

Student Council President Ashley Brazda and Vice President Jesse Sabatka presented Heineman with two Wahoo High School t-shirts and a hat as a token of thanks and to help him remember the day.

Governor Heineman poses with the WHS Student Council beside an WHS alumni display, and a display of high school pictures and yearbooks from the days when Heineman attended WHS. 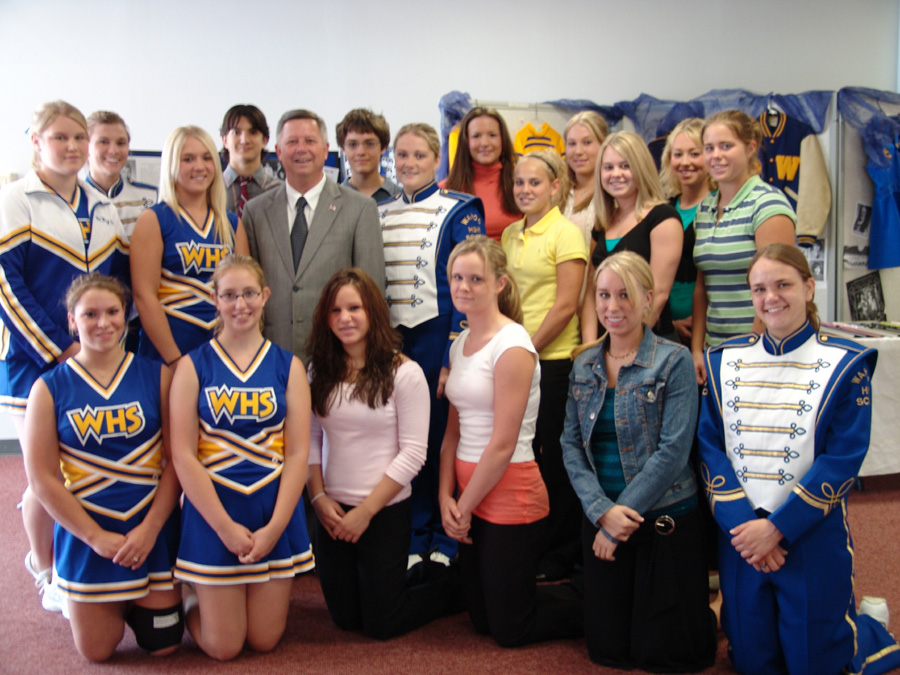 Launch the media gallery 3 player
Governor Heineman poses with the WHS Student Council beside an WHS alumni display, and a display of high school pictures and yearbooks from the days when Heineman attended WHS.

Heineman stayed for lunch after the assembly, and then was given a tour of the school. Highlighted on the tour were the changes made to the high school from when he graduated. He was also shown a display of alumni yearbooks, lettermen jackets and other paraphernalia. A special display especially for Heineman was also set up, including high school photos and a summary of his accomplishments.

Governor Dave Heineman was sworn-in as Nebraska's 39th Governor on Friday, January 21, 2005. Prior to becoming Governor, he served more than three years as Lieutenant Governor, having been appointed in October 2001 and elected to a new four year term in November 2002. Nebraska's 38th Governor, Mike Johanns, resigned after being confirmed as the United States Secretary of Agriculture.

Governor Heineman's vision for Nebraska is based on four priorities: education, economic vitality, efficiency in government, and protecting families. He is engaging citizens in a statewide discussion about the future needs of Nebraska in an effort to ensure the state's infrastructure matches 21st Century needs.

In his first legislative session as Governor, he also signed into law a no tax increase, balanced budget that provided for investments in K-12 education, the University of Nebraska and higher education across the state, and was a leader for ensuring the safety of Nebraska families and communities by supporting new anti-meth legislation that stiffens penalties for meth dealers and manufacturers.

The Governor is a strong proponent of local control of schools and a quality education for children. He favors voluntary school consolidation and vetoed LB 126 which would have forced small rural schools to become part of a K-12 system. He supports high academic standards and is working to increase parental involvement in education.

Governor Heineman serves as the lead Governor for the Western Governors' Association (WGA) Farm Bill Reauthorization and is a member of the Governors' Biotechnology Partnership. He also serves on the National Governors Association Natural Resources Committee.

As Lt. Governor, he served as Nebraska's director of homeland security, chairman of the Nebraska Information Technology Commission (NITC), and the presiding officer of the Nebraska Legislature. As chairman of the NITC, he worked with the University of Nebraska to create a telecommunications backbone across the state, for use by both the university and state government, to reduce costs, expand services and enhance distance learning opportunities. As the state's homeland security director, he led Nebraska into the national spotlight, recognized for innovative approaches to homeland security. In March 2004, Secretary of Homeland Security Tom Ridge appointed Heineman to his Homeland Security Advisory Council.

He was first elected to a statewide office in 1994, as the Nebraska State Treasurer. He was re-elected to that post in 1998. As Treasurer, he implemented the Nebraska College Savings Plan that has been recognized as one of the best programs in the country.

Dave Heineman is a native Nebraskan. He was born in Falls City and grew up in Fairbury, McCook, Benkelman and Wahoo, where he graduated from high school. In 1970, he graduated from the United States Military Academy at West Point and served five years in the U.S. Army, rising to the rank of captain. He is also a graduate of the Army's Airborne and Ranger Schools.

Wahoo Public Schools honors one of Its own