8th grade student Brittany Vech ties a yellow ribbon to the front of the school to help decorate in anticipation of the 623rd National Guard Unit's return. 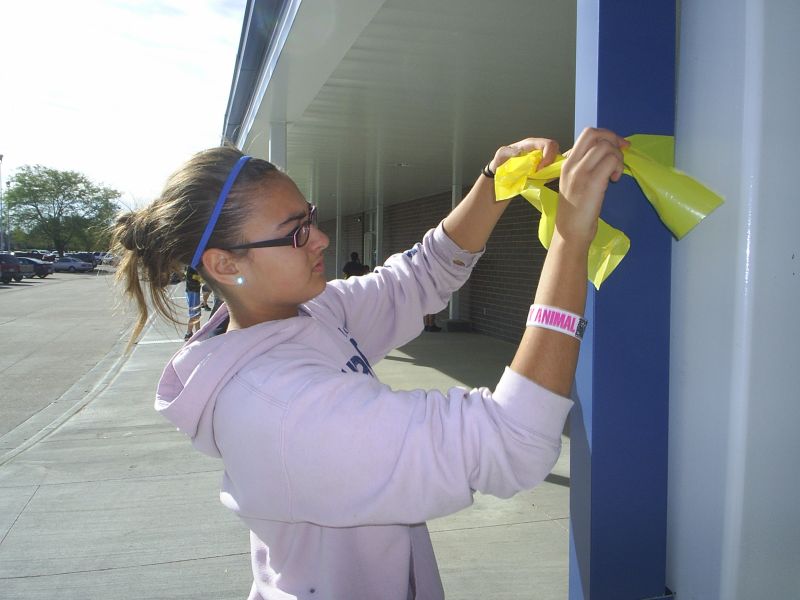 Launch the media gallery 1 player
8th grade student Brittany Vech ties a yellow ribbon to the front of the school to help decorate in anticipation of the 623rd National Guard Unit's return.

On Thursday, October 28, 2010 the community of Wahoo, Nebraska gathered to send off their own Nebraska National Guard Unit 623rd Engineering Company. Under the direction of Company Commander Capt. Chris Pelchat, 162 men and women boarded buses and headed off for a year of duty in Afghanistan.

The outpouring of support for the soldiers was tremendous. Governor Dave Heineman, Brig. Gen. Judd Lyons, adjutant general of the Nebraska Guard, state senators and representatives, as well as other local dignitaries, joined thousands of school children and community members to convey their best wishes to the group.

As the buses carrying the soldiers traveled out of the community, Legion Riders and Patriot Guard riders, as well as local and county law enforcement officers, escorted them. Red ribbons tied to mailboxes and streetlights lined the route, as did Wahoo Public School children holding signs of encouragement and waving small American flags.

The soldiers built outposts, guard towers and other infrastructure around Forward Operating Base Sharana and at other remote outposts in eastern Afghanistan.

The result of the construction projects will be left for the Afghan National Army’s use after the American forces leave. While the troops were away, the community was kept aware of the day-to-day operations through letters, calls, brief home visits and Facebook.

Loved ones were recently notified that the military company would be returning home to Wahoo on Friday, October 28, 2011, exactly one year from the day that they left home.

Volunteers working with the 623rd’s Family Readiness Group, Wahoo Middle School students and countless others have been busily preparing for the event.

Mayor Jerry D. Johnson said the community of Wahoo is proud to be the unit's home.

"Wahoo is a small town and we are family,” Johnson said.

Thousands of yellow ribbons line the streets as well as the Wahoo High School stadium, the site of the community’s welcome home celebration.

Most dictionaries define a hero as a person of distinguished courage or ability, one who is admired for his or her brave deeds and noble qualities. On October 28, Wahoo, Nebraska wrapped its arms around its heros: the returning members of the Army National Guard Unit 623rd Engineering Company.