"I would like to thank Dr. Josh Snyder, Superintendent Brandon Lavely, the Wahoo Foundation and directors Eric Gottschalk and Bill Reece, Astronaut Digger Carey, the Space Foundation crew and everyone else that came . . .

WMS 8th grader Cash Brigham's talents are "above and beyond"

WAHOO – Paintings of planets on display in a gallery in downtown Wahoo caught Wahoo Elementary Principal Ben Kreifels’ eye this summer. Even before he knew who painted them, he knew he wanted to use them to highlight the . . .

The 2nd and 3rd graders at Wahoo Elementary School are ready to kick off summer break with their program "Campfire Songs!" Take a walk down memory lane with classic songs such as "Take Me Out to the Ballgame" . . .

“We’ve Got Rhythm and More!” A unique year has given way to a very unique program. This year’s Wahoo Elementary 4th & 5th grade program was anything but ordinary! This year’s theme is . . .

Wahoo Elementary Kindergarten and 1st grade classes kicked off the Holiday season last week by recording their program, The Night Before Christmas. Each cohort was able to record their performance at the WPS Performance-Learning Center. . . .

English novelist William Godwin once said, “he that loves reading has everything within his reach.” Educators and parents appreciate the profound truth of those words, and do everything they can to instill a passion for . . . 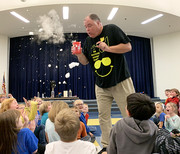 Why does dry ice appear to produce smoke when added to water? Why does a bottle of Coke explode when you drop in a little white mint? Is it possible to hang out inside a bubble? If only we had a comedic super hero scientist to help us . . . 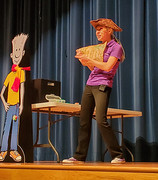 NED : N ever give up, E ncourage others, and D o your best! These were the three messages presented to students during NED’s Mindset Mission Assembly. All students in preschool through 5th grades attended the . . .

Students to perform among 350 peers from across the state

“Reading should not be presented to children as a chore or duty. It should be offered to them as a precious gift.” –Kate DiCamillo (American children’s author) Nobody needs to be convinced of the importance of . . .

This year´s Culture Day celebration was full of stations to engage the elementary kids. All of the activities that were planned for the students were hands-on and encouraged each and every student to participate. The stations consisted . . .

The 2018-2019 Beginning Band Instrument Showing will be held on Tuesday, September 11 at 7:00 p.m. in the Performance-Learning Center. All students and parents interested in 5th grade band are encouraged to attend. If your . . .

On Tuesday, Jan. 30, we had a great event in Head Start!  Thanks to a generous donation from Great Western Bank, all 39 children in Head Start received five new books to take home and keep.  Parents are encouraged . . .

A tragedy at the intersection of 23rd and Chestnut Streets has claimed the life of Wahoo Elementary 5th Grader Mason Triplett, a student who always had a contagious smile on his face . . . a student who has, over the years, brightened the . . .

Miss Richards' 2nd grade students recently welcomed 2016 Miss Nebraska Sara Hollins to their classroom. Hollins, an Omaha native who was crowned as the new Miss Nebraska back in January, read the book Oh, the Places . . .

Two elementary school students sat on the rubber floor inside of Hopkins Arena at Midland University and dropped pennies into a makeshift boat made from a small square of tinfoil. Asher Endorf, from North Bend Central, counted . . .

What a perfect day for a trip to UNL! All 88 Wahoo Elementary 5 th grade students headed to Lincoln on April 21. Next, we walked to Memorial Stadium for the big tour. We were able to see the weight room, where . . . 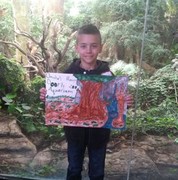 Havlovic's artwork selected among top 19 out of over 2,800 submissions!

Third graders from Wahoo Elementary participated in the Omaha's Henry Doorly Zoo and Aquarium 's 2014 Poster Contest. Students were asked to design a poster on 12" x 18" paper that reflects their favorite zoo experience. Overall, over . . .

10-year-old back in the saddle after horse injury

At 10, Jack Berggren is an experienced hand with horses. He knows the joy of riding, the thrill of competing and the daily work of caring for horses. Jack also knows the injury horses can cause. “He became interested in them . . .

One of our own has been named "Favorite Teacher" in the 2013 Celebrate Teachers program, sponsored by Westroads Mall in Omaha. In recognition of National Teacher's Day on May 7, Westroads Mall awarded Mrs. Andrea Beaver, a kindergarten . . .

Mrs. Beaver's kindergarten class recently took some time in the afternoon to go read to some of the residents at the Saunders County Care Center.   Each child took a few books to read. The kids had a great time and are excited to . . .

The letter A is for Arbor Day in Nebraska author Rajean Leubs and illustrator Sandy Appleoff's Discover America State by State Alphabet Series, but it was F for Nebraska's First Lady on February 27 when over 200 elementary students at . . .

“Never give up on your dreams!” This was the message from globetrotting photographer Dean Jacobs to students gathered to hear his tales of adventure and exploration. On Tuesday, Feb. 19, Wahoo Elementary was fortunate enough to . . . 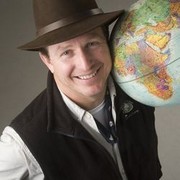 Since 2001, Dean Jacobs has spent four and a half years traversing across the globe exploring over 51 countries on a low budget adventure, propelled by a desire to understand the world we share. Jacobs was born in Wahoo, Neb. After . . . 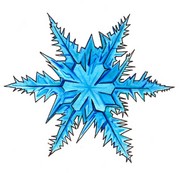 On December 12, the K-1 grades performed their 2011 Christmas program.   The Dolce Voce choir started the show off with two familiar songs to get the crowd into the Christmas spirit. They were followed by the Kindergarten class, who . . .

It is tradition that kids all over the world write letters during Christmas. But why are all those letters written specifically to Santa? What about all those little people behind the scenes? Two visitors straight from the North Pole . . .

More than just Book Buddies!   Mrs. Verna Rezac's fifth graders and Mrs. Kim Thrasher's kindergartners are more than just neighbors this year, they are book buddies.   This year their classes are right across the . . .

Students Learn Podcasting from the Pros!

The 5th graders of Wahoo Elementary are discovering that podcasting isn’t just for techno-geeks! It really is a lot easier than it looks! Last week, each of the three fifth grade classes boarded a bus and headed to Village Pointe . . .

On Saturday, March 27, the WClub wrestlers competed at Waverly for the Waverly Club Invitational. The invitational was an all-day event that paired wrestlers from towns all around the state. Each year the officials that work for the . . . 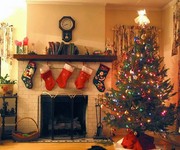 Did You Miss the Performance? Watch It Below!

On December 14 the kindergarten and 1st graders performed their holiday concert “Home for the Holidays.” The story is about a family trying to get home for Christmas, but everything is snowed out or closed. They take a magical ride in . . . 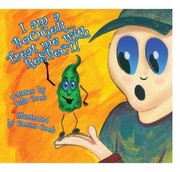 The Word "Booger" Makes Its Debut on the WPS Web Site

Boogie the Booger teaches little pickers and flickers the healthy way to blow their nose using a Booger Ghost. Boogie knows that most people think that he's gross, and some people even call him a snot. But he doesn't feel bad because he . . .

Last spring, Ann Crocket nominated Mrs. Kelly Meyer for the A+ educator of the week. Ann said, "Mrs. Meyer is so well loved by her students and their parents that it is only fitting she be nominated by her entire class and their . . .

The American Legion Auxiliary of Wahoo, Unit 82, sponsors an annual Americanism Essay Contest, based on a theme announced each Spring. This year’s theme was “Soldiers Past and Present – America Honor Your Veterans.” The local contest . . .

These second graders from Wahoo Elementary have enjoyed singing a funny song about a moose who drank a lot of juice. One of the mothers taught them the silly song when she was substituting in music class. They have been singing it since! . . .

4th Graders to Share What They Learned in School Skit

The Nebraska Choral Directors Association is proud to sponsor the 2008 Sing Around Nebraska Children’s Honor Choir. This event will be held on November 14-15 at the Lied Center for Performing Arts in Lincoln, Nebraska. The choir of 150 . . . 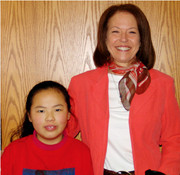 Mary Larsen Nominated for the Honor by a Former Student

"I'd like to nominate Mrs. Mary Larsen for teacher of the week," writes Christy Zheng, one of Mrs. Larsen's former students. Christy Zheng came to America when she was five years old and was enrolled in mrs. Larsen's kindergarten . . .

CONGRATULATIONS to the 2005 winners of the MADD poster contest. Kelsi Anderson was awarded 1st Place, Jesse Dorer was awarded 3rd place, and Haley Jones was given Honorable Mention. This was in the 4th and 5th grade category. There was an . . . 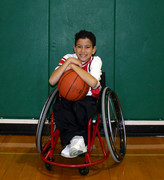 "He shoots! He scores!" the announcer screams over the buzzer as the three-point shot swooshes through the nylon net of the hoop. The player wheels back to his teammates for a couple of high fives before the halftime break begins. . . .

WPS Third Grade Teacher Gets Showered by Her Students

Kids Defy All Odds by Keeping the Secret for Over a Month!

"Love is something you fall into," wrote Hannah S. of Ms. Diane Ray's third grade class. The class designed a book titled "Love Is . . ." with quotes written from her students for Ray to read and enjoy on her surprise bridal shower, held in . . .

Excitement is always present in a kindergarten classroom, but on November 30 the kids in Mrs. Britton's class were more riled up than ever! Despite the coldness of winter, with the new month came new life in the form of eight baby chickens. . . .

Three Wahoo Elementary students have placed in the 2005 Nebraska State Fair Art Exhibit.     WES third grader Lindsey H. won the first place ribbon, along with a wooden plaque and a $100 . . .