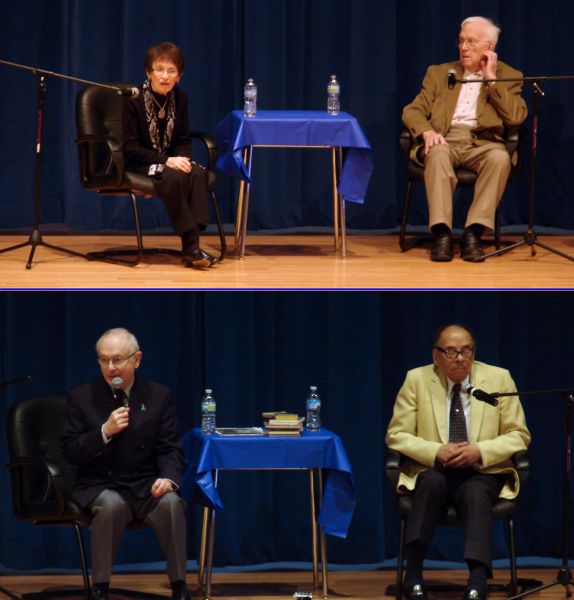 Video of Both Sessions Now Posted

So when she spoke to students gathered at Wahoo High School, Bea Karp had to stand on a wooden platform to reach the podium.

But the tiny woman had a powerful story. A Holocaust survivor whose parents died in Auschwitz, Karp was a child when the Nazis took over Germany. She witnessed Kristallnacht (the Night of Broken Glass) in Germany, the suffering of a forced labor camp and the heartbreak of losing beloved family members.

Karp, who lives in Omaha, was one of two survivors, who along with two camp liberators, spoke Wednesday during Week of Understanding outreach activities sponsored by the Institute for Holocaust Education in Wahoo. Students from Wahoo and several area schools filled the school auditorium, while those from several other northeast Nebraska schools viewed presentations via satellite video. 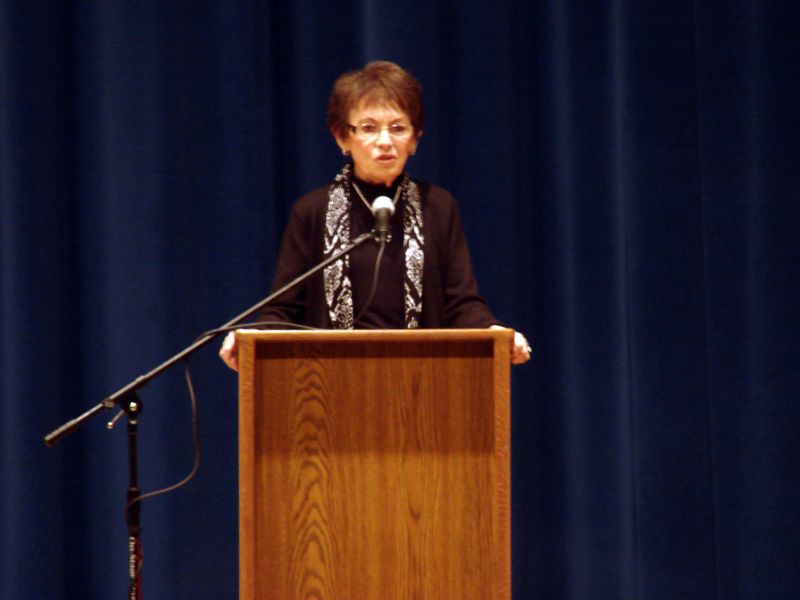 Born in Germany, Karp remembers when Hitler decreed that Jewish people couldn’t own property and later that Jews and Gentiles couldn’t fraternize. Her family had to give up their textile business and home. She recalls signs in shop windows saying that Jewish people were forbidden there, the terrible name-calling she faced at school and the time when Jewish children were no longer allowed to attend. 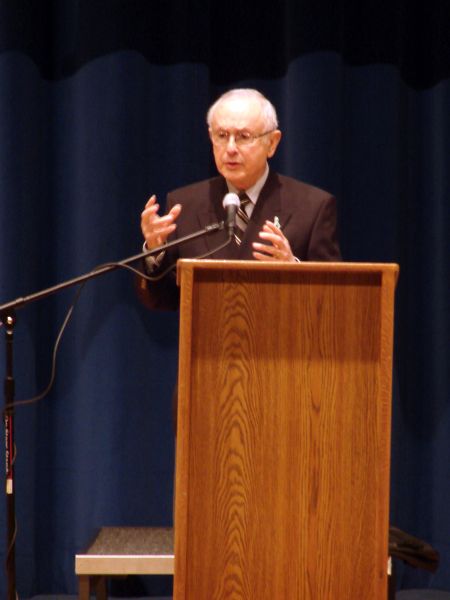 And there was Kristallnacht.

“We were woken up because there was so much noise out on the street,” she said. “I rushed to the window and looked out. It was as if the whole city ... was on fire.”

Her father hurried to the synagogue, hoping to save religious items; he and many other Jewish men were rounded up and sent to forced labor. Windows of still-Jewish owned shops, their homes and apartments were broken and the places looted.

One day, two Gestapo men came to her family’s apartment and told her mother to pack. Karp broke a beloved doll with a porcelain head rather than have the men take it. Knowing she would never see their apartment, she clung to a table leg only to be pried loose by her mother.

In October 1940, her family was put on a passenger train without food or water. The young girl licked windows just to get a little moisture. Anyone who tried to hide money was shot. Karp, her mother and sister were taken to Gurs work camp. She still remembers how her mother cried out when gold earrings were yanked from her pierced ears.

The camp’s dark barracks had straw-filled mattresses. Conditions were filthy and inmates got lice in their hair and clothing. Once a day, inmates had to divide a single loaf of bread and fights broke out.

‘When you’re hungry, it hurts and you’ll do anything for food,” she said.

At one point, she noticed her mother was getting thinner. So Karp and a younger sister went to visit their father at a nearby camp. When a guard asked them where they were going, she kicked him in the boot, called him a name — and the sisters walked out of the camp.

She found her father who’d received a raw egg, but found blood when he opened it. As an Orthodox Jew, he followed dietary laws that forbid eating blood, so he threw the egg against the wall. She ran to lick the egg from the wall, but turned to her father first. Seeing the expression on his face, she couldn’t do it.

“What my father was trying to tell us by his actions was this: ‘I have no control as to what the Nazis do with me physically, but mentally I still have a choice to do what’s the right thing or the wrong thing.’ It was quite a lesson. I’ve never forgotten it,” she said.

Karp and her sister later were rescued and sent to a home in France. She was moved 14 times. By 1943, she and her sister were sent to a convent in Milleau, where they hid until the end of the war. In 1945, they went to England. She still remembers walking down the street and, for the first time, realizing she didn’t have to be afraid. She eventually came to the United States, married and raised four daughters with her husband in O’Neill and moved to Omaha in the 1960s.

“We have to guard our freedom and make sure that we always will live in a free and democratic country,” she said, later telling the Tribune: “I think Americans are wonderful people.”

As a member of the 71st Division of San Antonio, Long helped liberate Gunskirchenlager in Austria. He saw the dead and dying scattered all over the camp. In one small building he saw bunks filled with three to five inmates jammed in each. The place was silent. The odor incomprehensible. The malnourished inmates were so weak they couldn’t get out of their bunks.

“I was kind of in shock. It was difficult to believe what I was seeing ... It was really overwhelming for me,” said Long, now of Omaha.

Another camp liberator, Bass of Newtown, Pa., and his friend, survivor Waisman of Vancover, Canada, shared the stage Wednesday afternoon.

Born in Poland, Waisman remembers when the Nazis invaded in 1939 and how in 1942 his brother later sneaked him, then only 11, into a munitions factory, where he worked 12-hour days. His brother contracted typhoid fever. And when an SS guard noticed, he loaded the man into a truck with other ill inmates.

“I followed my brother, because I didn’t think I could live without him. When he saw that, he motioned me to stay away ... I wanted to go give him a hug, because I never did say to my brother that I loved him...,” Waisman said.

He never had another chance.

Waisman saw the truck go off into a wooded area and heard muffled machine gun fire.

Later, Waisman and other inmates were packed into a train boxcar with no food or water. Many hallucinated. Inmates who died were unloaded at various stops. The boxcar had lots of room by the time it reached Buchenwald, which Waisman figured he’d never leave alive.

He remembers the American liberators who came April 11, 1945.

It was the first time he’d ever seen an African American. He wouldn’t forget the face.

“I didn’t know his name, but I was sure he was my angel,” Waisman said.

Bass, a young African American soldier, wouldn’t forget Buchenwald. As part of the 183rd engineer combat battalion, attached to Patton’s 3rd Army, Bass already had seen plenty of fighting. Nothing prepared him for this. He saw naked prisoners with sores on their bodies. One prisoner’s fingers were webbed together with sores.

He was taken to a room where human body parts were kept in formaldehyde. He saw a lampshade made of skin. In another room, he saw instruments of torture on a wall. He never saw children. Only lots of children’s clothes. He saw a blackened skull and rib cage in a crematorium.

Before Buchenwald, Bass had begun to wonder what he was fighting for. Prior to heading overseas, he’d known the discrimination of not being able to drink from a public water fountain in the United States or having to stand at the back of a bus for 100 miles because he wasn’t allowed to sit in the front.

After Buchenwald, Bass realized he wasn’t the only one who’d endured human suffering.

“I realized that I did have something to fight for,” said Bass, now a retired teacher and high school principal.

Waisman, who lost his whole family except for a sister in the Holocaust, and Bass were reunited four decades later.

“As time takes us away from the Holocaust, it is even more critical to listen to the words of the witnesses,” said Beth Seldin Dotan, IHE executive director. “Their personal stories add a face and a name to a distant and somewhat incomprehensible event.“

Nearly 900 students and teachers from 17 Northeast Nebraska school districts will have a once-in-a-lifetime visit with a Holocaust survivor and liberator during Week of Understanding outreach activities sponsored by the Institute for Holocaust Education at Wahoo Public Schools March 7. Additional school audiences will participate through satellite video conferencing.

“As time takes us away from the Holocaust, it is even more critical to listen to the words of the witnesses,” said Beth Seldin Dotan, IHE executive director. “Their personal stories add a face and a name to a distant and somewhat incomprehensible event.“

A Week of Understanding is a project to provide survivor testimony to middle and high school students.

Holocaust survivor Bea Karp and Liberator Roy Long will give their personal testimonials and respond to questions during a 90-minute morning session beginning at 10:00 a.m. Holocaust survivor Robbie Waisman and his liberator, Leon Bass, will interact with a second afternoon audience at 1:30 p.m. Respecting the age of Holocaust survivors and liberators, as well as the emotional exhaustion of recounting their experiences, two sets of speakers are scheduled for live audiences that average 450 at each session.

Not all survivors can speak about their experiences, said Dotan. “Some want only to remember their memories silently, but for Bea and Robbie, and others like them, there is a need to speak out.”

The same is true for those who liberated the Nazi Germany camps and saw these Second World War atrocities.

Educational professionals must have attended October Echoes and Reflections: Holocaust Education for 21st Century Classrooms training facilitated by Dotan and have implemented the curriculum to be eligible to participate in outreach activities.

More powerful, more compelling than photos, text or video is the face-to-face personal opportunity to visit with those individuals, said Wolfe.

Mr. Waisman is a survivor of the Buchenwald concentration camp, and Leon Bass was his liberator. In 1936 the former Bea Stern was a child when her family was deported to concentration camps in France. While Bea and her younger sister were rescued by a children’s refugee organization, their parents — along with scores of cousins, uncles and aunts — were killed.

“These individuals, and others like them, are the last to bear witness to the Holocaust. It has never been more important to listen to the words of this generation,” said Dotan. 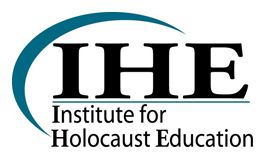