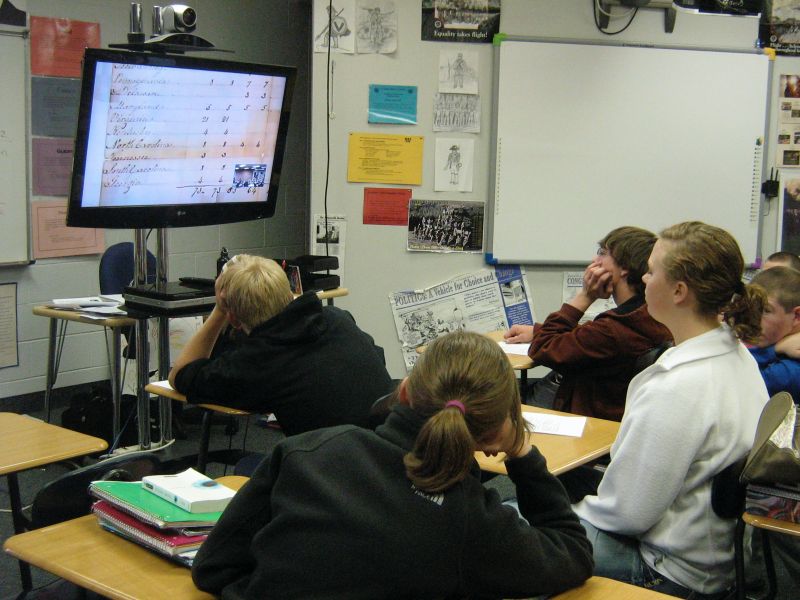 Students in Mr. Mueller’s Honors American Government classes had a unique opportunity on Tuesday, April 26 when they linked up with the National Archives in Washington, D.C. via videoconference to learn about the Executive Branch.

The presentation was delivered by Mr. David Rosenbaum, a Nebraska Native, veteran teacher from Tri-County High School, and now educational specialist at the National Archives.

Rosenbaum presented a variety of interesting pictures and documents about the history of our 20th century presidents. Students learned about the different roles the president plays including: Party Leader, Commander-in-Chief, Chief of State, Chief Diplomat, and Chief Legislator.

For each role, Rosenbaum showed unique artifacts. For example, he presented a photo of LBJ signing the Medicare Law as an example of chief legislator. He also showed pictures of Jimmy Carter welcoming Pope John Paul, JFK speaking at the Berlin Wall in 1962, and George H.W. Bush sharing Thanksgiving with soldiers in Kuwait, among many others.

Students also got to see many letters that citizens have written presidents over the years. The Archives has kept millions of these letters, and Rosenbaum shared a few. Perhaps the funniest was a 12-year-old boy writing to Ronald Reagan. He said that his mom had declared his room a disaster area and he was asking the president for federal funds to help with the clean up. Needless to say, it got some boisterous laughter. Interestingly, Reagan took the time to compose a hand-written letter back to the youngster and even invited him and his mom to the White House.

We also got to see a letter that a 14-year-old Fidel Castro wrote to FDR in 1940 asking him for $10. Needless to say, Castro would become Cuba’s dictator about 10 years later.

Students also briefly learned about the history of the Electoral College, including Nebraska’s unique system where we can split our electoral votes. He showed the official electoral ballot from the 2008 election where Nebraska split its votes between Obama and McCain – the only state in the history of the U.S. to ever do so.

Rosenbaum concluded the presentation with pictures of presidents as young boys in a segment called “From the School House to the White House,” and we had to guess which president they were.

Overall, it was a fascinating presentation, very educational, with a lot of unique historical information.