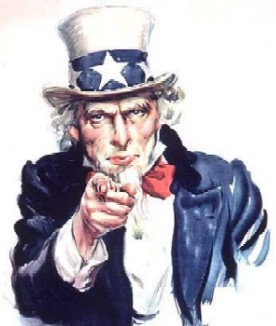 PLEASE DON'T BE AFRAID of these government-sponsored sites! There is TONS of great information available at these sites for classroom use!! BILLIONS of taxpayer dollars are used annually on government publications, in both print and digital formats, and much of this information is published directly for teacher/student use. There's something for everyone.

America's Story
Students can find out what Abraham Lincoln had in his pockets the night he was assassinated; read about Buffalo Bill Cody and his Wild West shows; learn about the heroism or Harriet Tubman as she helped slaves escape; find out what a 'cloth sandwich' is; or see a film of a break dancer way back in 1898. Young students can also learn what happened on the day they were born, or go to Explore the States if they are working on a report on one of the United States. They can also send a postcard to a friend and play a scavenger hunt. This site does a great job of making history fun for young students.

Ben's Guide to U.S. Government for Kids
Once you arrive at "Ben's Guide", you will see Benjamin Franklin flying a kite with the kite divided into four different grade levels: K-2, 3-5, 6-8, and 9-12. Click on the grade level appropriate for you, and you will be taken to a site that explains in many different ways how our government works. The K-2 site, for example, has information on "Your Neighborhood", "Ben's ABCs", "Symbols of U.S. Government", and "Games and Activities" that can be printed or used interactively. The grades 6-8 site has links to "Historical Documents" (Declaration of Independence, Bill of Rights, Emancipation Proclamation, among others), a description and pictorial process for "How Laws are Made", information about the "Election Process", and "Games and Activities" appropriate for this age group. Each of the grade-level sites also has a link to the Ben's Guide's version of FirstGov for Kids that is titled U.S. Government Web Sites for Kids. Like FirstGov for Kids, this directory also has a subject approach, but in addition, the user can click on "Agency" or "Alphabetical" to have the links organized.

FirstGov for Kids
A good place to begin to find resources for students in grades K-8. This site was developed and is maintained by the Federal Citizen Information Center, and, aside from federal government sites, this site includes links to some of the best sites from organizations for kids. One advantage of this site is that it is arranged by broad topics, such as Arts, Careers, Computers, Fighting Crime, Fun Stuff, Geography, Global Village, Government, and so on, encompassing 20 subject areas. All nongovernmental sites linked in FirstGov for Kids comply with the regulations in the Children's Online Privacy Protection Act of 1998. If you are looking for a topic that is not covered by one of the 20 broad topic areas, use the "search" option. From the FirstGov for Kids page, click on "search", type the subject in the search box, and add the word "kids". For example, typing in "dinosaurs kids" results in more than 30 options.

Global Gateway
From here, you can link to "Portals of the World" where students are presented with a list of more than 175 countries. The links for each country have been selected by area specialists and other Library of Congress staff to provide authoritative and in-depth information about the countries.

Library of Congress
"a gold mine of information in many curricular areas. You will find a link from its home page to 'American Memory' that provides a way to locate primary source materials pertaining to the history of the United States. Students can choose from more than 7 million digital items (documents, photos, maps, films, and sound recordings) from more than 100 historical collections to learn about a certain time in American history. 'The Learning Page' is a link for teachers that provides lesson plans on U.S. history, civics, and literature topics, ranging from grades 4-12."
YOU COULD EASILY LOSE A COUPLE YEARS OF YOUR LIFE EXPLORING THIS SITE!

NASA Kids
Learn about the earth, the sun, or the evolution of space travel. Play Connect the Stars and Make a Constellation, or learn about rockets and airplanes. Sponsored by NASA, this site also has several other children's links listed. The Just for Kids site for students in grades K-12 is sponsored by NASA's Johnson Space Center. It gives information about how astronauts sleep and work in space and also lets users become virtual astronauts.

THOMAS
Another link on the Library of Congress page. For students who are tracking legislation at the federal level or who are interested in finding out what bills might have been introduced on a certain topic. This always-changing site includes databases that allow the following searches: *the House floor this week and on a current legislative day; *a quick search of the text of bills in the current Congress; *summary and status information about bills and resolutions since 1973; *public laws by law number since 1973; *House and Senate roll call votes since 1990; *Congressional Record index since 1993; *committee reports since 1993; and *current House and Senate directories. Information on how laws are made in both the House and the Senate, a summary of congressional activity from 1969, and links to historical documents that formed the foundation of our country from 1774-1789 are provided on this site. New materials are added daily to many databases, and the bill text files are updated several times a day.

USA.gov
Whatever you want or need from the U.S. government, it's here. You'll find a rich treasure of online information, services, and resources. This is the U.S. government's official web portal, priding itself on having something to offer all users.

The U.S. Government Manual
Useful to those studying civics or political science. This is the official handbook of the federal government, and it provides information on the various agencies of the federal government and also the quasi-official agencies, as well as the international agencies with which the U.S. government does business. Each listing gives a brief history of the agency, tells its role in the government, and describes its programs and activities. The principal officials along with their phone numbers are also listed.

The World Factbook
This is an easy-to-use almanac that is published by the CIA, offering detailed information on all the world's geographic and political entities. A great resource for study on foreign countries and governments.