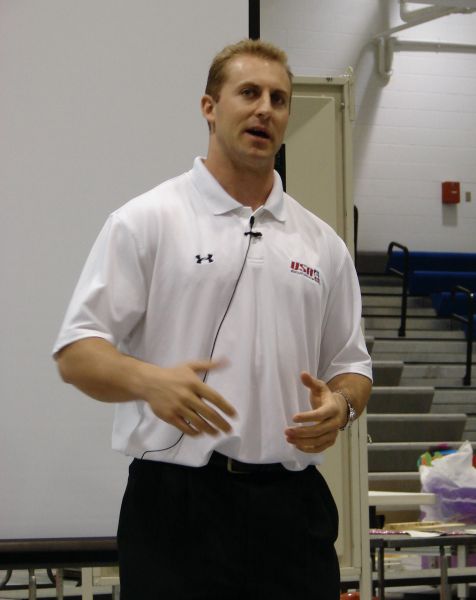 “My mom wouldn’t let me get a Nintendo!”

These lamenting words opened the presentation of Shelby, Nebraska native Curtis Tomasevicz, member of the 2010 Vancouver Winter Olympic Gold Medal Bobsledding team, whose mother pushed him to be as active as possible as a child. Looks like she was on to something!

Tomasevicz was the featured speaker at two special WPS assemblies on Thursday, May 6. He gave an inspirational talk to a combined middle/high school audience, followed by the elementary school.

In addition to telling his personal story, the focus of Tomasevicz’s presentation was on competing, doing things the right way, and to always remember your roots and give back to your community.

A former Cornhusker football player (playing running back and linebacker from 2000-2003), Tomasevicz attended UNL on a full-ride academic scholarship, and now holds a Bachelor and Master of Science degrees in electrical engineering, with a minor in astronomy.

Launch the media gallery 2 player
He was named to the U.S. Olympic Bobsledding Team in 2004, and began preparing for his goal of qualifying for the 2006 Winter Olympics in Torino, Italy. Unfortunately, being a new college graduate, his funding was very limited, and it became questionable as to whether or not he would be able to afford his quest for Torino. That’s when his community came to the rescue.

The town of Shelby, with a population of only 690, held a fundraiser in support of Tomasevicz, and was able to raise $25,000, enough for him to continue his journey!

“They didn’t even know if I would be eligible for the Olympics, but they believed in me!” Tomasevicz said. “Talking about Shelby gives me a lot of pride.”

Tomasevicz did go on to qualify for his first Olympic competition in 2006, as the #2 man in the USA2 four-man sled. While they didn’t medal, they did finish 6th, ahead of the 7th place USA1 finish, a rare occurrence.

Four years later, he qualified for the Vancouver games in both the two-man and four-man competitions.

In the two-man competition, “we tried too hard,” Tomasevicz commented. A couple too many mistakes resulted in a 6th place finish. The four-man competition would take place a week later, where the ultimate task was to beat Germany, the country known as the traditional powerhouse in the bobsledding event. 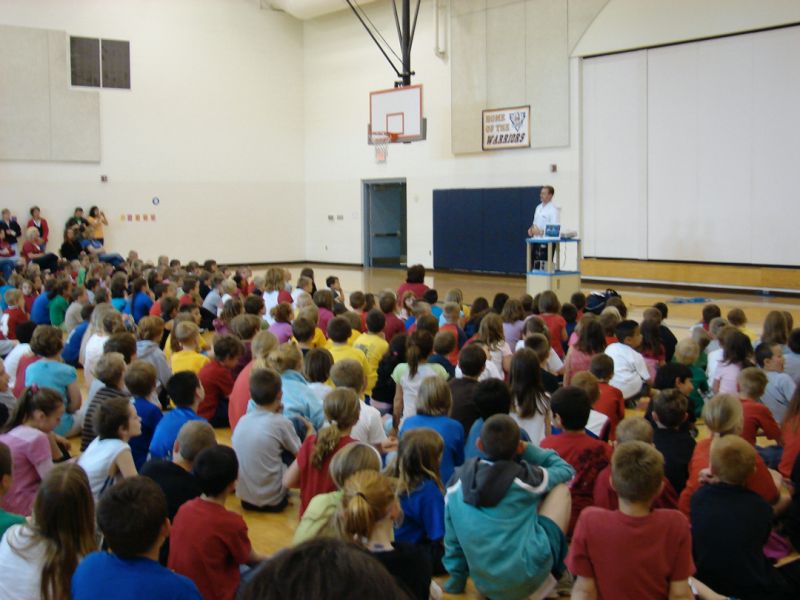 Launch the media gallery 3 player
Tomasevicz, along with teammates Steve Holcomb (Park City, UT), Steve Mesler (Buffalo, NY) and Justin Olsen (San Antonio, TX), were ready to take their Night Train bobsled into the February 26-27 competition. In the end, of course, USA took the title away from Germany, by 45/100 of a second, significant for a sport that reaches speeds up to 95 mph.

And so a new tradition begins. With the Olympic Gold and other World Cup titles, The United States has had more success in bobsledding in the past four years than the last 50 years combined.

Tomasevicz spoke of the Olympic opening ceremonies at both Torino and Vancouver as the greatest honors he has ever experienced. He spoke highly of the Olympic spirit—the equality of nations—the fact that the same enthusiastic standing ovation was given to all countries as each country’s athletes were announced.

During his presentation, Tomasevicz showed students his gold medal, his helmet, and his competition shoes which each contain over 500 needles, which provide traction on the ice. He also pulled his skin-tight uniform out of his bag, and explained that he needs assistance in order to put it on.

“If you don’t respect me for winning this [gold medal], fine—I can live with that. But you HAVE to respect me for wearing this!” Tomasevicz joked as he held up his uniform.

Being an Olympic Gold Medalist also has its perks off the bobsled track.

In the brief time that’s passed since winning the gold, Tomasevicz has met President Barack Obama, attended a space shuttle launch in Florida, flown in an F16 fighter jet (only vomiting three times!), throwing out an opening pitch at Wrigley Field, and his ultimate highlight—playing onstage with his favorite band, Pearl Jam, in Kansas City.

Prior to the last space shuttle launch, Tomasevicz received a phone call from Susan Anderson, wife of astronaut Clayton Anderson, a native of Ashland, NE. Mrs. Anderson asked Tomasevicz if he had anything he could send up into space on the next shuttle mission. Not willing to let his gold medal out of his sight to orbit the earth, Tomasevicz handed over the pair of push gloves he used in his gold-winning four-man competition.

Not long after, Tomasevicz received an official e-mail from the International Space Station. In addition to a short congratulatory message, the e-mail contained an attached photograph of Clayton Anderson floating upside down, wearing a Nebraska baseball cap, his push gloves, and a flannel cut-off shirt owned by Larry the Cable Guy!

Tomasevicz closed his presentation by showing a video compilation of highlights from the Vancouver games, from the opening ceremonies to the awards presentation. Appropriately, the song “Life is a Highway” by Tom Cochrane played in the background.

Tomasevicz closed his talk by encouraging students to find their own personal success, emphasizing that it will not always be obvious, as demonstrated by a small town Nebraska kid who eventually takes a gold medal in an Olympic event to which he had no exposure as a child.