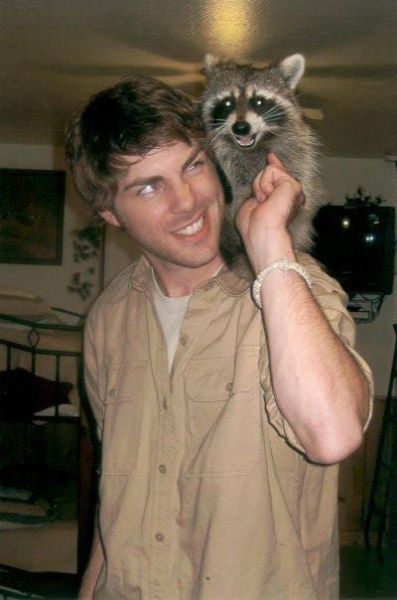 Tim Davison teaches students about wildlife, the environment & importance of following your passions

The word 'zoo' is oftentimes used to figuratively describe the school environment (If you've ever been in a middle school, you understand why!). That analogy became much more literal, though, on Monday, Sept. 16, 2013, thanks to a Warrior alumnus.

Tim Davison, a member of the WHS Class of 2006 and currently the Education Outreach Coordinator for the Honolulu Zoo Society in Hawaii, presented three assemblies (one to each school), offering students an up close and personal experience with a variety of animals, and a message encouraging them to learn about wildlife, do their part in protecting our environment, and pursue their passions when determining their future careers.

The assemblies, hosted by WPS and Educational Service Unit #2 in Fremont, were held in the WPS Performance-Learning Center, and were also broadcast live to over 20 other schools around Nebraska via distance learning technology.

“I realize growing up in Wahoo, Nebraska doesn’t sound like the most exciting thing,” Davison said to his high school audience, and he recalled having a similar sentiment when he was in high school. But, after having the opportunity to speak to over a million students in cities all across the country, Davison added, “the biggest thing I gained from my travels was an appreciation for my hometown!”

Davison then showcased a variety of animals during his assemblies, describing their unique characteristics, natural habitats, and explaining the downside to people owning these animals as pets. Student volunteers were called out of the audience, and each animal was walked through the aisles so students could get a close-up view. The animals showcased included the following: 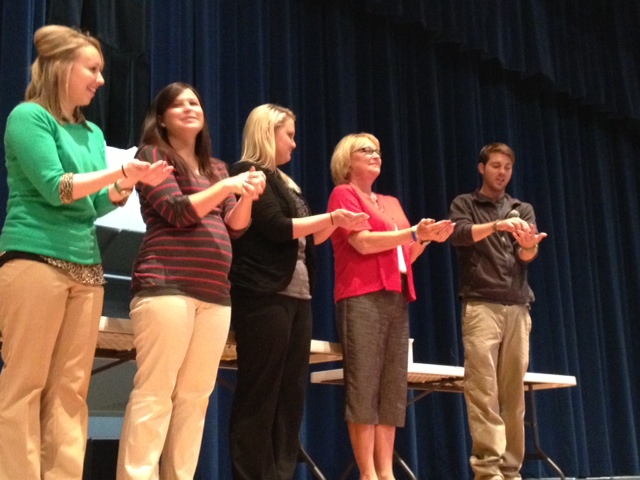 These creatures get a bad rap (as was illustrated by Mrs. Weibold and other elementary teachers, who held these creatures in their hands . . . for a VERY short period of time!), but serve an extremely important role in the environment as decomposers. Their huge job is keeping the forest floor clean by eating the rotting trees and plants.

The mouths of these cockroaches are so small that they are unable to bite. Also, the “hissing” sound they make does not come out of their mouths, but out of their backs! Each bug has 20 holes in their back, and they take air from their bodies and push it out through these holes. 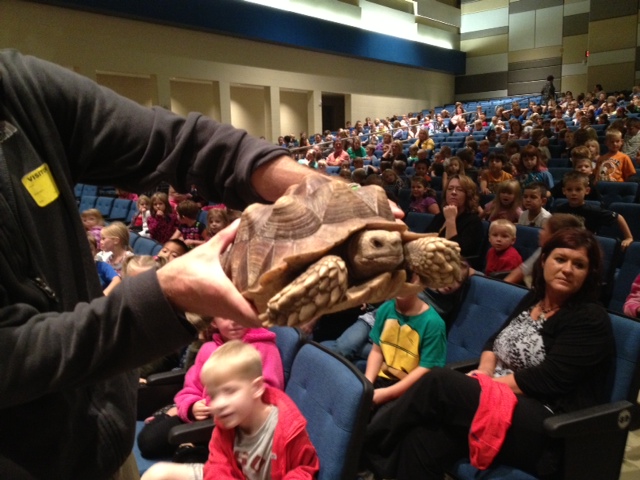 Tom is a five-year-old tortoise that weighs 25 pounds. Like cockroaches, tortoises have bragging rights of being among a very few number of creatures that have been roaming the earth for millions of years. These tortoises will grow to a weight of 150-200 pounds, and have a lifespan of up to 150 years!

Students were taught that Tom gets a bit offended when he is called a turtle. Turtles live in water, and tortoises live on land . . . duh!

This specific tortoise comes from the Sahara Dessert in Africa, where it only rains a couple inches a year. To survive in this environment, these tortoises estivate (ie: they borrow ten feet under ground during the dry season, where they will stay for months, until the rain hits).

Tom was given to Davison by a teacher in Maryland, whose son owned the tortoise, and lost interest, to the point where she feared the animal was being neglected. Tom had also illustrated a largely unknown destructive quality possessed by tortoises. A hole torn in a bedroom wall was the final straw for this Maryland teacher!

A tortoise’s shell is made out of keratin (the same substance as human fingernails), and should be smooth. Unfortunately, it's easy to see in the above photo that Tom’s shell is not smooth; rather, it has numerous protruding spikes. This condition is called “pyramiding,” and it occurs when the animal is fed too much protein, causing the shell to grow too quickly. 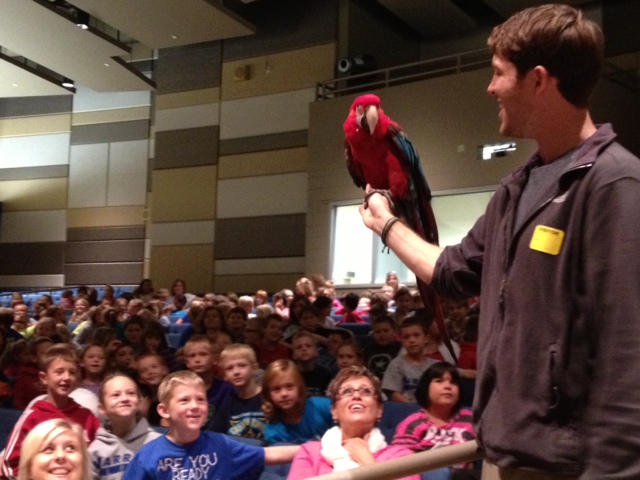 “I never knew that birds could express themselves . . . that they could show emotion!” Davison said as he introduced Cyrno, a 13-year-old Green-Winged Macaw. These birds have a lifespan of 60-80 years, and are known for their ability to speak, which Cyrno was more than willing to demonstrate!

Born and raised in Kansas, Cyrno’s first owner died in an automobile accident, and the bird was given to the pet rescue in Gretna, NE, where Davison was employed prior to moving to Hawaii.

The most impressive thing about a macaw, other than its beautiful colors, in the power behind that beak! A macaw’s beak, which is made of keratin, can bite down at 2,500 pounds per square inch (psi), which is enough to crack the toughest nut, or take off a human finger if it wanted to! Compare that to the human mouth (300 psi) or the German Shepherd (700 psi). With that kind of power, it's very important to keep a macaw happy, especially if it's perched on your hand! 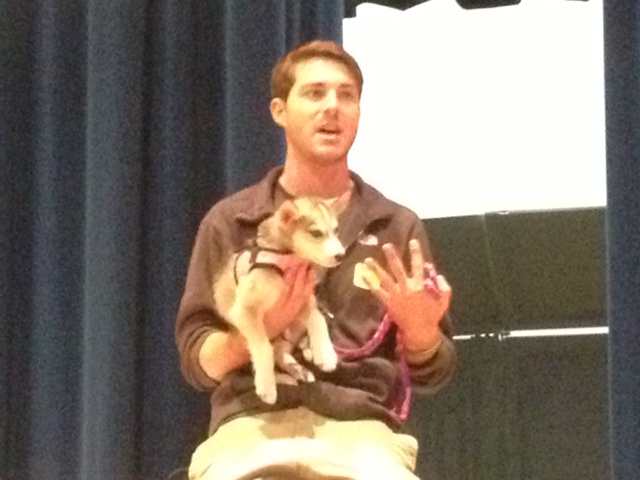 Gray Wolves have previously been hunted almost to extinction, but thankfully have been reintroduced into Idaho, Washington and Oregon, where they are once again beginning to thrive.

Davison told students that he had a past opportunity to raise a wolf cub, naively thinking that, with constant attention, he could turn it into a domesticated pet. That thinking turned out to be flawed! 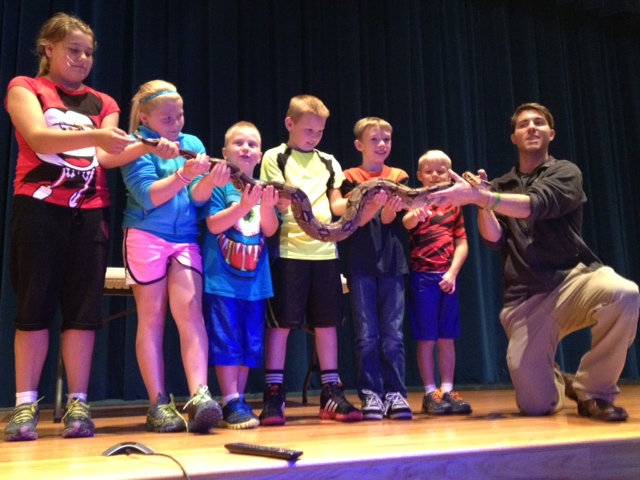 Julius is currently over six feet long . . . less than half of what's to come! These animals will grow to 13-15 feet in length, and live up to 50 years!

Davison explained the crisis that has been caused by these snakes: people purchase them as pets, and eventually the snakes grow to an unmanageable size, and owners simply release them into the wild, where they have decimated native populations of raccoon, opossum, deer and other wildlife species. In Florida, for example, the deer population has declined 94 percent in the past ten years!

A boa constrictor can consume prey that is three times its width, and ¾ of its length. That means Julius Squeezer is large enough to consume the typical kindergarten student. As a safety precaution, all kindergartners were kept off the stage! : )

Davison closed each assembly by encouraging everyone to learn as much as possible about animals and the environment, and to “get outside!”

Davison had no problem keeping students' attention as he shared his story of how his passion for animals evolved into a dream job he didn't even know existed. He concluded with the sound advice of spending your life doing what you love.

“Drive to be something you’re passionate about! Don’t follow a career path just for the money,” Davison commented at the conclusion of his high school presentation.

Wildlife educator, public speaker, outdoorsman, traveler, artist, and amateur film maker. Youngest of three brothers to be born, raised, and to attend Wahoo Public Schools. He developed an affinity for the outdoors at a young age through fishing, hunting, and camping both around Wahoo and in western Nebraska. After graduation in 2006, he moved to Omaha, Oklahoma, and then to Colorado in pursuit of a passion in the arts. While attending classes at Mesa State College in Grand Junction, CO. and Metropolitan Community College in Omaha, NE he worked odd jobs such as waiting tables, being a bill collector for a cell phone company, painting houses, managing a miniature golf course, and doing graphic design for a marketing firm, all while drawing and painting in spare time.

In 2009, an opportunity came about to be a traveling wildlife educator through Wildlife Encounters of Gretna, NE. Over the next four years, an affinity for the outdoors and wildlife became a career path that he didn’t even know existed. Since then he has traveled to 49 states and spoke to over a million people about wildlife and conservation. Davison was a semifinalist in Mutual of Omaha’s “Next Wild Guide” competition this past spring and is currently the Education Outreach Coordinator for the Honolulu Zoo Society in Honolulu, HI. 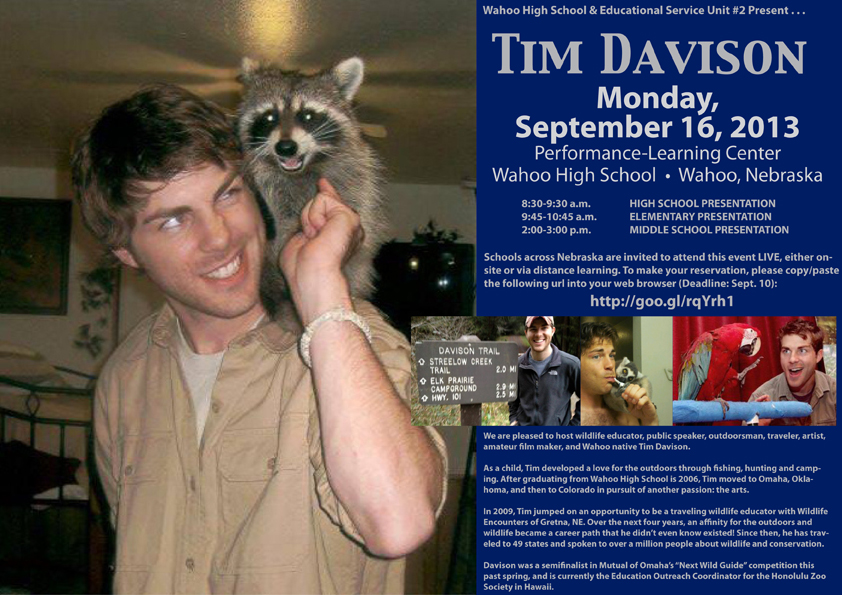