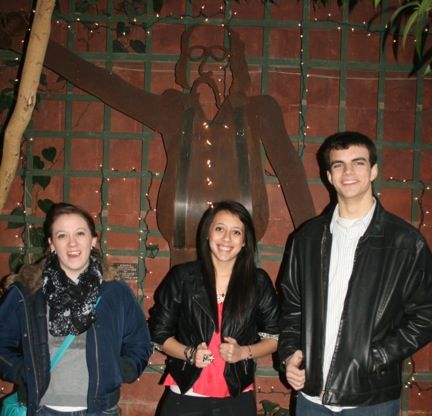 Juniors Fenina Rummel and Matt Spicka and sophomore Hannah Storm learned much more than they had anticipated during the two-and-a-half-hour tour.

“The tour was a great way to start off the year,” said newspaper adviser Carol Mertl. “We were very lucky to have two accomplished veterans of the World-Herald as our tour guides.”

Director of Communications Joel Long met the small but mighty group in the lobby of the World-Herald headquarters and immediately impressed the group with his vast knowledge of the history of the World-Herald and the daily operations of the paper. Long took the Wahoo group through the Freedom Center, where the presses run, explaining everything from how much a spool of paper weighs (four tons if you’re wondering), to how many newspapers the five-story press can print in one hour (about 75,000 or over 1,000 per minute).

“I thought it would take a lot more people to run the printing presses,” said Spicka. “They only had about four or five people operating them from computers.”

“Watching the presses run was pretty cool,” added Storm. “It’s crazy how many papers they can print so quickly.”

Each student received a hot-off-the-press newspaper (which is by no means physically hot) and an OWH pen from Long, who then escorted the group back to the newsroom where they met with World-Herald staff writer Henry Cordes.

Cordes, a 30-year veteran of the World-Herald, is not only a seasoned reporter, he is an accomplished author, having published his first book, Unbeatable: Tom Osborne and the Greatest Era of Nebraska Football, in December 2012. Cordes offered sage advice to the budding journalists.

“The more you write,” said Cordes, “the more you develop your own voice as a writer. Take every opportunity you can to write.”

Writing is just one aspect of reporting, though. One of the most difficult tasks young journalists face is interviewing sources for their stories, but Cordes says this is one of his favorite aspects of the job.

“To do this job, you can’t be a shrinking violet,” Cordes offered. “I love schmoozing sources. I love meeting people and establishing important contacts. I genuinely enjoy talking with people.”

Cordes, who got his start on his school newspaper at Omaha Central High School, added that he loves his job.

“The newsroom is the coolest place to work,” he said. “It’s where you can take your passion for writing and make a career of it.”

It was obvious he enjoyed sharing his experiences with the group before he showed them around the newsroom and introduced them to graphic artists, copy editors and police beat reporter Maggie O’Brien.

“I really liked meeting her [O’Brien],” said Storm. “She seemed very enthusiastic about her job, and I like that. I would love to tag along with her some day.”

With the day winding down, students reflected on the visit and what they might like to write about in their own paper. After a one-semester hiatus, The Warrior Echo will be back this semester with a new edition. Look for it on newsstands near you!