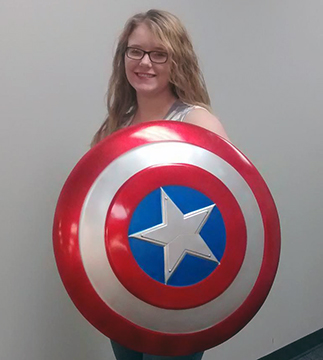 Imagine writing a story that every person in the town with the population of Grand Island (population 45,000) has read! Well, such a scenario has happened for Wahoo High School senior Taylor Rouse.

Rouse is a Captain America fan, and after watching the second Captain America movie, The Winter Soldier, Rouse spent five months writing a short story, “Target,” that continued the tale. She posted it to the website wattpad.com (Her user name is Raptor_Girl) in April of 2014, and the story has been read 46,936 times!

Rouse is writing in a literary genre called “fan fiction.” According to Wikipedia, fan fiction is “fiction about characters or settings from an original work of fiction, created by fans of that work, rather than by its creator. Fan fiction has become popular on the Internet. Some prominent authors have given their blessing to fan fiction, notably Harry Potter author J.K. Rowling. Rowling said she is ‘flattered” that people wanted to write their own stories based on her fictional characters. Similarly, Stephanie Meyer has put links on her website to fan fiction sites about her characters from the original Twilight series.”

Rouse has other stories posted to wattpad.com. A series of short stories, Avengers/Marvel One-Shots, has been read 12,600 times. She is currently writing a sequel to her “Target” story called “Remember.” Rouse posts updates to “Remember” as she writes new chapters.

In order to read Taylor Rouse’s work, go to wattpad.com and set up a user name and password. Then search for Raptor_Girl and enjoy her stories!