Benjamin Franklin once said, “An investment in knowledge pays the best interest.” Wahoo Public Schools Superintendent Brandon Lavaley stated, “There is no one factor that determines who will be worthy of being successful."

Winners of a National Merit Scholarship Corporation (NMSC) award might agree with both statements.

Recently, several NMSC finalists from Wahoo High School gathered to celebrate the unveiling of the school’s newest academic recognition board: the National Merit Scholarship Program award board. WHS has had 14 semifinalists or finalists in the history of the award program, which started in 1955.

According to the NMSC’s website: "National Merit Scholarship Corporation (NMSC) was established in 1955 — a time in which there was concern that the United States was lagging behind in the cold war scientific race, but the public was indifferent to rewarding intellectual accomplishment. In response, the National Merit Scholarship Program was founded to identify and honor scholastically talented American youth and to encourage them to develop their abilities to the fullest.”

WHS’s first finalist, Bob Urban, was named an award finalist in 1956. After receiving a Regents scholarship to Nebraska University (there were no other schools in the university system at that time), Urban studied mechanical engineering. Upon graduation, he earned a master’s degree from Purdue and worked for Western Electric. He developed a love for working on cars, motorcycles and playing bridge. When asked for a piece of advice to share with today’s students who are pursuing academic success, he stated that students should learn to be useful.

Ian Hoppe, a 2009 NMSC finalist, is currently working on a master’s degree in disease ecology at the University of Nebraska at Lincoln. His studies have taken him around the globe, including stops in Australia and Papua, New Guinea. He encouraged students who are striving for high academic achievement to remember to focus on each learning opportunity as it happens and live life one step at a time.

Another Wahoo NMSC award winner, Caleb Groff (2018), was studying abroad in New Zealand and unable to attend the celebration. Through written communication, the aerospace engineer who is currently attending Iowa State University, mentioned that he chose to enter the NMSC competition after taking his Preliminary SAT/National Merit Scholarship Qualifying Test. He also said that the competition seemed like a great opportunity to not only help pay for college, but also to get his foot in the door at major universities and corporations.

University of Alabama student and NMSC finalist Anna Dobesh (2019) is currently studying biology and psychology. While attending Wahoo High School, Anna completed 12 dual-credit classes. She carefully planned which classes she enrolled in, and as she is contemplating exactly what she will do after she graduates from college, Anna encouraged today’s high school students to be goal-oriented and plan for future success.

The newest NMSC finalist, Alex Tomjack, was named a finalist one month ago. He plans to attend the University of North Texas next fall and study computer science. Fond of building computers and playing golf for fun, Alex also enjoys working collaboratively. Currently a mentor at WHS, Alex values teamwork and recommends that students who are seeking academic goals shouldn’t forget to use all resources that are made available to them. Alex’s father, Clayton Tomjack, was also present at the celebration. He summed up the celebration by saying, "Don’t underestimate the significance of the (NMSC) opportunity. You will not win a NMSC scholarship without taking the PSAT test." 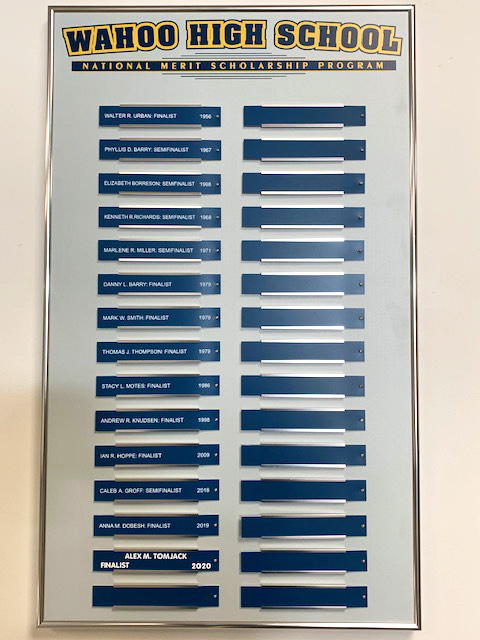