They are creepy, kooky, mysterious, spooky . . . and talented and successful! A May 12 press release (re-posted below) by Omaha Performing Arts affirms that hard work pays off.

"This is yet another confirmation of the depth and talent of the students at Wahoo High School," said WPS Superintendent Brandon Lavaley. "To be recognized and invited to perform in a statewide showcase is great recognition of the crew, cast, and directors in organizing a hugely entertaining show. We are very proud of the continued achievement of our students and staff across all areas of the educational experience."

"This award is a culmination of the efforts of the combined Wahoo staff, students, and community," Langholdt commented.

Smith added, "I am just so proud of our kids and thrilled they have been chosen for this honor. I love that their hard work and talent are being validated in this way. Thank you and congratulations to everyone involved!"

As part of this showcase, the WHS cast and crew will perform a scene from the musical ("When You're an Addams") live on stage. The scene features a solo by Barnes. Barnes will also rehearse, along with 74 other student performers, in preparation of an opening and closing musical selection with Q. Smith (Broadway performer and Omaha native), this year's Showcase host.

Congratulations Sydney, Dawson, and the entire cast and crew for these outstanding accomplishments . . . a very appropriate way to end a very accomplished school year!

Advanced tickets avaialble for purchase at the following link: ticketomaha.com/Productions/nebraska-high-school-theater-academy-showcase

OMAHA, NE (May 12, 2022) - Omaha Performing Arts (O-pa) announces Nebraska's theater students who have been named award-winners for outstanding performance and technical achievements through the Nebraska High School Theater Academy (NHSTA) program. The winners will be honored at the Orpheum Theater in the NHSTA Showcase on Sunday, June 5, at 7:30 p.m.

The 9th Annual Tony Awards® inspired celebration is open to the public. You can purchase your seat now by visiting ticketomaha.com.

Broadway performer and Omaha native Q. Smith (COME FROM AWAY, MARY POPPINS) will host the Showcase featuring middle and high school students from over 70 schools statewide. 75 students will perform an opening and closing musical selection with Q. Smith. The assistant choreographer this year is Mia Sherlock, a graduate of Omaha Burke and an NHSTA alum. Awards include outstanding performers, senior of the year award, and artistic excellence behind-the-scenes. The event will also honor outstanding Nebraska educators. This year's national finalists include 16 top student performers from across the state.

During the Showcase, two students will be named to represent Nebraska at the Broadway League's National High School Musical Theatre Awards®, known as the Jimmy Awards®, in a performance held Monday, June 27, 2022, at Minskoff Theatre in New York. The two national nominees will join 90 other students from across the United States for a week of coaching with Broadway artists and industry experts. The students compete for top performance awards along with 20 additional awards and scholarships.

The Nebraska High School Theater Academy celebrates the power of the arts and supports high school and middle school theater programs by connecting teachers and students to learning opportunities with Broadway stars, theater, and backstage professionals. Students also receive professional feedback on school performances and additional performance opportunities. The NHSTA program began in 2013 with 22 Omaha-area schools and now reaches more than 8,000 students across Nebraska each year. 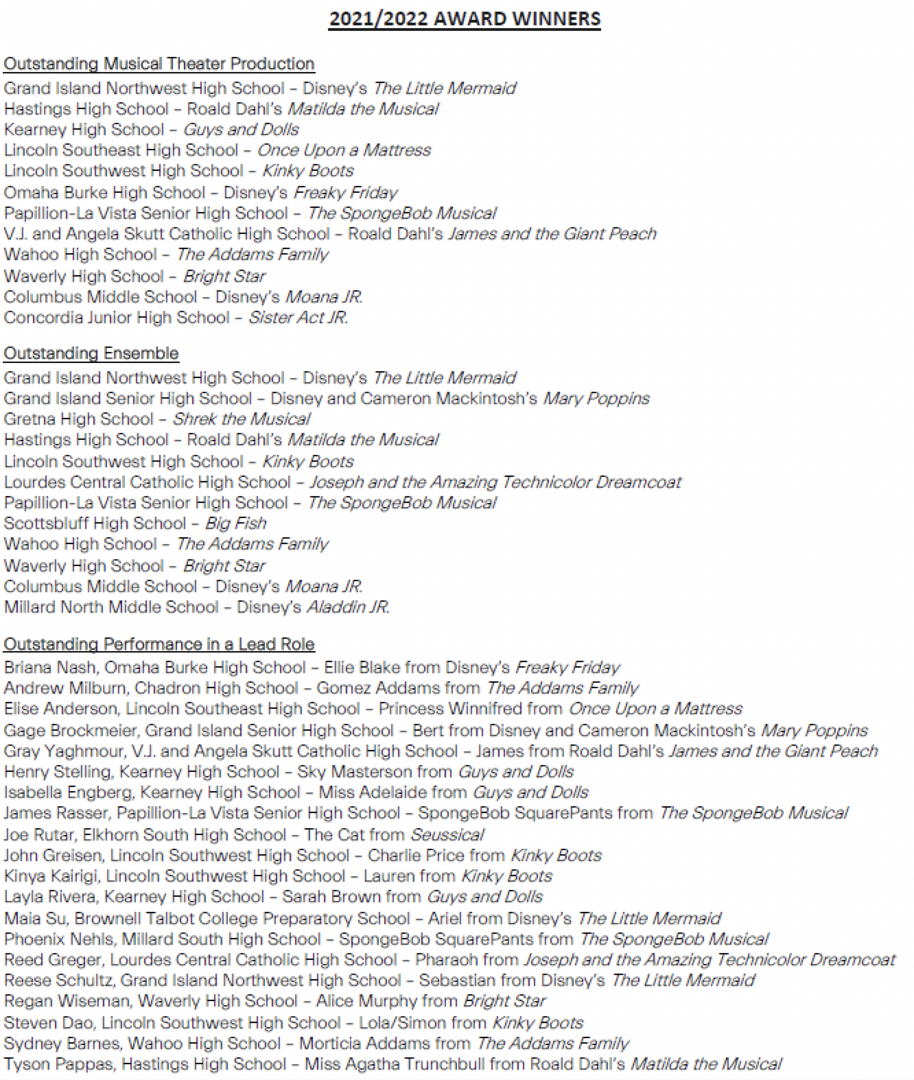 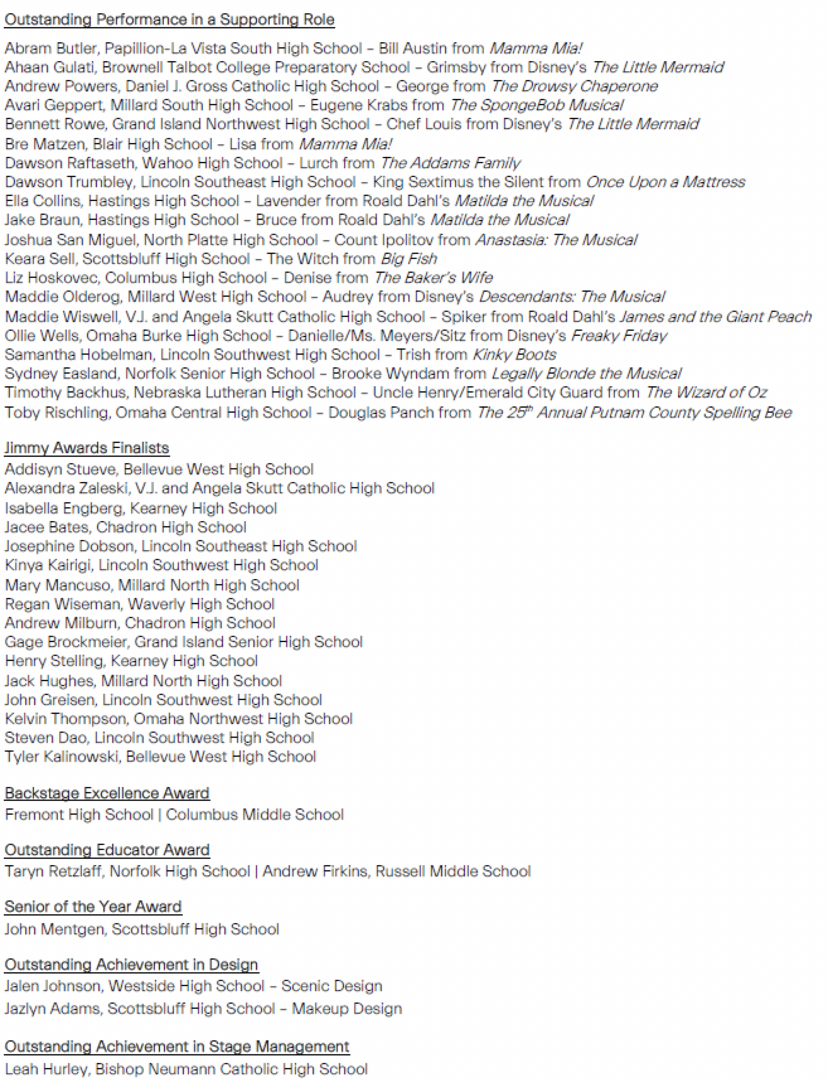 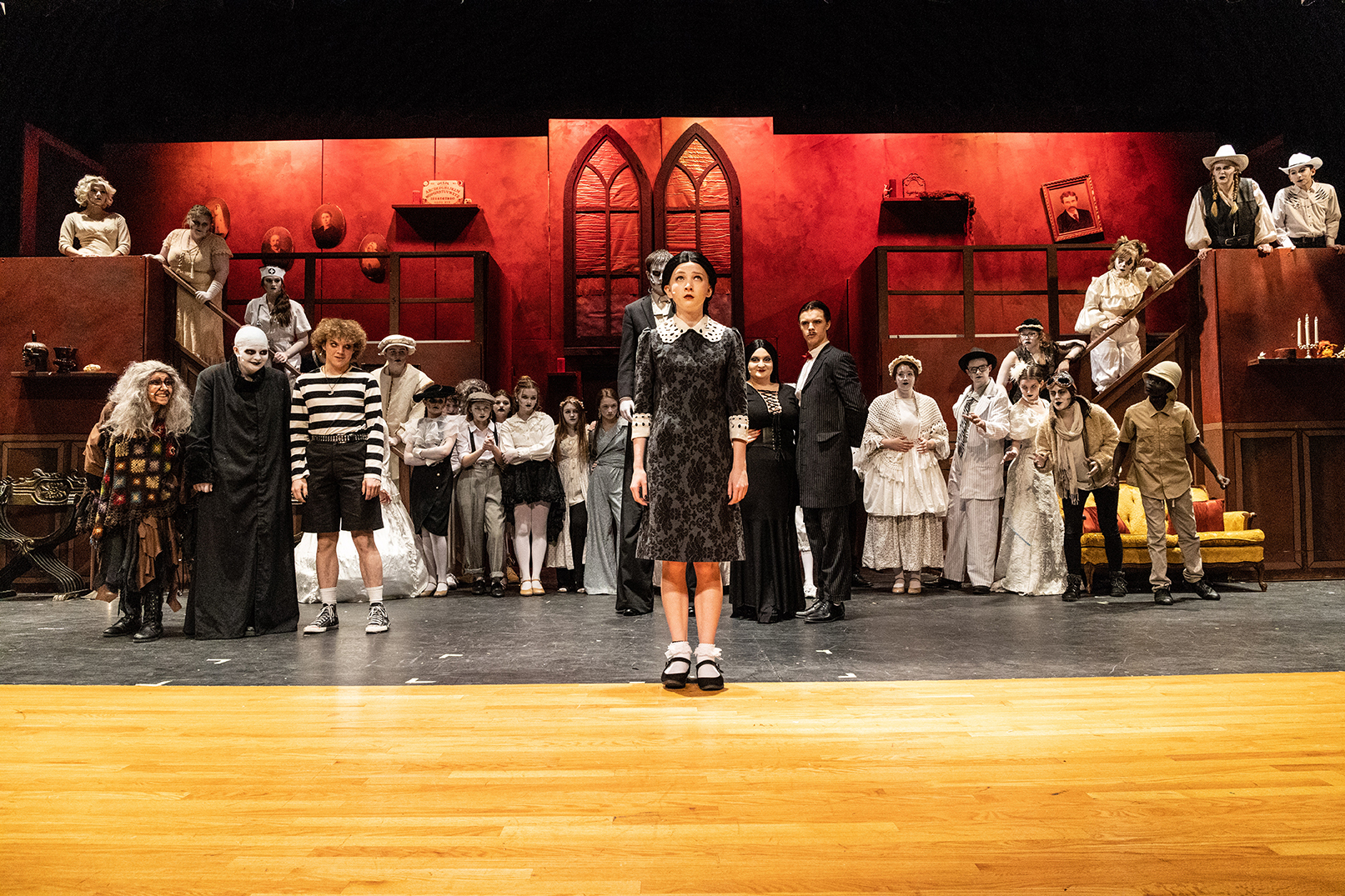