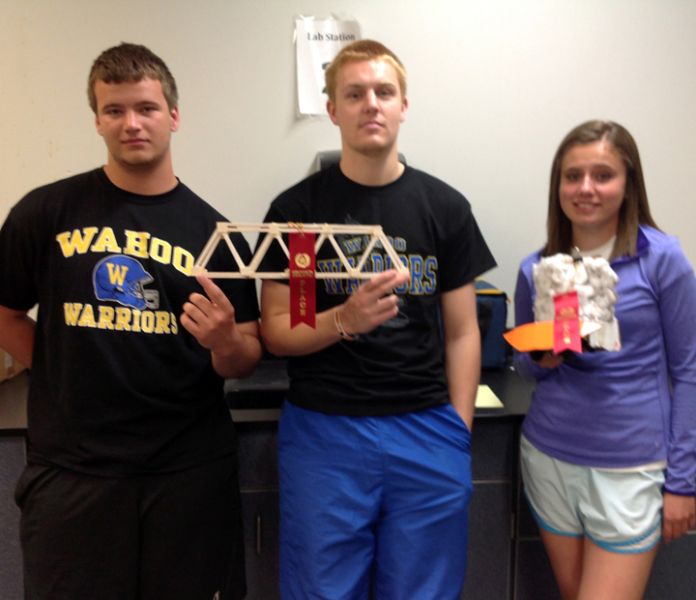 While local officials continue to discuss the replacement of numerous closed bridges that exist throughout Saunders County, they may want to consider consulting with WHS physics students for structurally sound solutions!

Lindgren and Scheef competed in the Expo along with other members of the WHS physics class, accompanied by their instructor, Mr. Clayton Tomjack.

This is the class’s first time participating in the competition.

The Expo has been sponsored for over 20 years by the University’s College of Engineering, as an opportunity to introduce area high school students, teachers, and the general public to the intricacies of engineering. The event also includes a Physics Bowl for high school teams.

In the Bridge Builder competition, according to the SDSU website, “one or two students design and fabricate a model or a type of bridge structure. The bridge [is] tested, per the rules and regulations listed . . . to determine the maximum amount of load (pounds) it is able to withstand.”

The second place bridge created by Lindgren and Scheef held 99 pounds in the test, falling just short of the winning bridge, which held 101 pounds.

In this event, the goal “is to design and fabricate a vehicle that can climb a ramp under its own power, stop at the top of the ramp, and sustain its position against an opposing vehicle coming up the other side of the ramp.”

Brust's fabricated vehicle originally placed 3rd in the Hill Climber, but the car that eliminated her was later disqualified, moving Brust to an official 2nd place finish!

Other WHS competitors who barely missed placing in their events were Rylee Armstrong and Tschida Johnson in the Rocket Car competition, and the Impromptu Design team of Johnson, Armstrong, Katie Harrell, and Brust.

“I thought our students did extremely well considering this was our first time competing,” Tomjack commented.