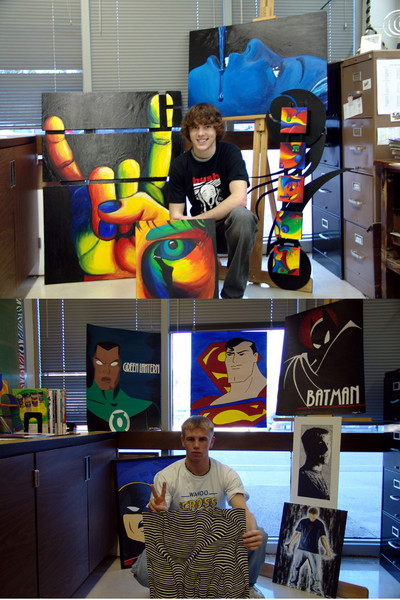 WHS Artists' Skills Evolve Well Beyond Coloring in the Lines

Artistically, while most people find it difficult to create a simple stick figure, students of the Wahoo High School Art Class have no such problem. Many artists have submitted their original works to The Nebraska State Visual Art Awards for the 2005-2006 Contest. Those students include sophomore Tyler Hedges, junior Kim Smith, and seniors T.J. Sabatka, James Garcia, Megan Jones, and Gina Halbom. Going above and beyond, submitting seven works of art combined, were seniors Dan Dunbar and Tim Davison.

Dunbar has been interested in art since he was a small child.

"I basically started out like everyone else, with coloring books, then went on from there," Dunbar stated.

He has moved from crayons to paint and markers. His drive for creating comes from his desire to perfect his style for his planned career in animation in either film or television.

Dunbar is not pressured by outside influences when looking for his next big idea.

"I like my paintings to look cool to me. I only like things that I would hang up in my room. Something new," Dunbar said.

Throughout his high school career, Dunbar has been recognized for his outstanding works of art. He placed first in the Seward Art Contest in 2003. He also received a gold key from the 2003 Scholastic Art Awards.

His love for art grew from his mother's support. The style of Russian painter Wassily Kandinsky was also influential. Kandinsky, Pablo Picasso and Henri Matisse were a few innovators of abstract art, Dunbar's forte.

Davison is also influenced by Kandinsky's modern abstract style. His works reflect this through his use of dynamic colors and dramatic shapes.

"I just try and think of things I've never seen before," Davison commented.

Where Dunbar plans to transition his artistic talents into the career level, Davison takes a more laid back approach.

"I'm going to art school," said Davison. "Someday I want to design for a big company, with art on the side."

Some of Davison's important influences were his brothers and former WHS Art Teacher Lynn Wilson.

"They both do totally different things, but it reflects what type of art they want to pursue," commented Wahoo High School Art Instructor Kim Brigham. "I think that they both have great futures in art."

WHS Artists' Skills Evolve Well Beyond Coloring in the Lines