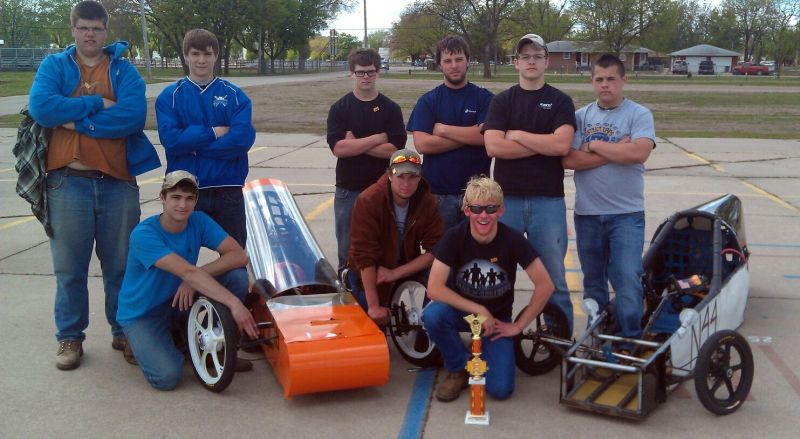 Click HERE to read Lincoln Journal-Star's coverage of the event.

The Wahoo High School Electric Vehicle team traveled to Columbus for the Alternate Fuel Odyssey on Friday, April 13 for their first race of the season.

The day began at 8:30 a.m. when the team left the shop for Columbus. The Electric Vehicle team is made up of two electric cars designed and built from scratch by WHS students. The cars are each powered by two 12-volt batteries and race for one hour. The car that travels the longest distance (in laps) wins.

The N66 car is driven by Dylan Kellner, accompanied by Dylan Bennett, Brandon Ford, Cameron Golter, Schyler Shanahan, Nick Russell, Rod Patocka, and Noah Kellner in the pits. The team N44 car is driven by Camren Walling and has Michael Jonas, Ty Kander, and Jack Putnam as its pit crew.

Car N44, driven by Walling, started the race in the first 60-minute heat at 11:30. Walling got off to a good start, passing cars, and keeping a consistent lap time to conserve battery power.  With ten minutes to go, Walling blew out his back tire. This finished his race day with a total of 43 laps. The car held up well despite swapping paint with another car in a corner and ending up in the grass. Walling ended up with a second place finish in his heat by only ¾ lap.

Car N66, driven by Kellner, started the second heat directly following heat one. He ran consistently as well, scoring times slightly better than the N44 car. Kellner’s car ran well for the entire hour and finished first in his heat with a total of 57 laps.

The Wahoo cars raced under the novice class and finished 1st and 3nd in the class!

The N44 car placed 2nd place in the Novice class. Overall, the cars performed very well for our first race of the year. The cars will now compete at the Big Red Invitational this Saturday, April 21 in Lincoln at the UNL East Campus tractor testing track. Following this weekend’s race, the team will compete in the Nebraska State Powerdrive Championships at Werner Field in Papillion on May 5.