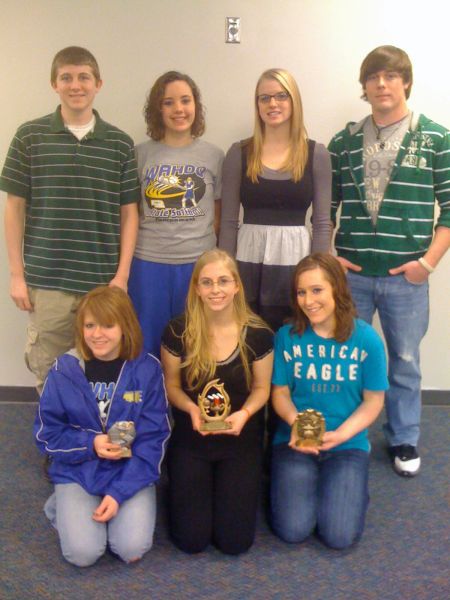 The third time was the charm for WHS Senior Melissa Ford, as she won the 2010 Poetry Out Loud School Championship.

Ford, last year’s runner-up to Eric Curran, used a strong, second-round recitation of Edgar Allan Poe’s “A Dream Within a Dream” to break open a tight contest and pull away from the competition.

Seventy WHS students competed this year at the classroom level, with the top seven advancing to the school championship. Each finalist recited two memorized poems for the judges. Poems must be selected from the Poetryoutloud.org website. Students are scored based upon the following criteria: physical presence, voice and articulation, appropriateness of dramatization, level of difficulty, evidence of understanding, accuracy, and their overall performance.

The top finishers at the regional competition will advance to the state finals at 1:00 p.m. on Saturday, March 13 at the Sheldon Art Museum’s Abbott Auditorium in Lincoln.

The state winner advances to the national finals in Washington, D.C.

Below are the 2010 Wahoo finalists with the poems they recited in the finals.

Melissa Ford: "I Think I Should Have Loved You Presently" by Edna St. Vincent Millay, and "A Dream Within a Dream" by Edgar Allan Poe

Savannah DeWine: "The Star" by Ann Taylor, and "Do Not" by Stevie Smith

Dayna Gulliksen: "The Star" by Ann Taylor, and "Gitanjali 35" by Rabindranath Tagore

Ben Brabec: "Fire and Ice" Robert Frost, and "A Shropshire Lad II: Loveliest of Trees, The Cherry Now" by A. E. Housman

Kristal Lindgren: "Let It Be Forgotten" by Sara Teasdale, and "In the Desert" by Stephen Crane

Brady Darnell: "Fire and Ice" by Robert Frost, and "In the Desert" by Stephen Crane