Kristen Tomjack to serve as 1 of 2 NE representatives in week-long event in Washington, D.C.

Jan. 8, 2015, Washington, D.C. -- Senators Deb Fischer and Ben Sasse today announced the names of the two students who have been selected as delegates to the 53rd annual United States Senate Youth Program (USSYP) that will be held March 7 – 14, 2015 in Washington, D.C.

Elsa Knight of Clay Center and Kristen Tomjack of Wahoo were chosen from across the state to be part of the group of 104 student delegates who will attend the program’s 53rd annual Washington Week.

The USSYP was created by Senate Resolution 324 in 1962 and has been sponsored by the Senate and fully funded by The Hearst Foundations since inception. Originally proposed by Senators Kuchel, Mansfield, Dirksen and Humphrey, the impetus for the program as stated in Senate testimony is “to increase young Americans’ understanding of the interrelationships of the three branches of government, learn the caliber and responsibilities of federally elected and appointed officials, and emphasize the vital importance of democratic decision making not only for America but for people around the world.”

Each year this extremely competitive merit-based program brings 104 of the most outstanding high school students — two from each state, the District of Columbia and the Department of Defense Education Activity — to Washington, D.C. for an intensive week-long study of the federal government and the people who lead it. The overall mission of the program is to help instill within each class of USSYP student delegates more profound knowledge of the American political process and a lifelong commitment to public service. In addition to the program week, The Hearst Foundations provide each student with a $5,000 undergraduate college scholarship with encouragement to continue coursework in government, history and public affairs. Transportation and all expenses for Washington Week are also provided by The Hearst Foundations; as stipulated in S.Res.324; no government funds are utilized.

Elsa Knight attends Harvard High School and serves as a Student Council representative and vice president of her school's Drug Free Youth chapter. She is involved in a variety of school activities, including Speech, Show Choir, One-Act, Power Drive, Quiz Bowl, Spanish Club, Future Business Leaders of America, Science Olympiad and Peer to Peer. She mentors younger students, acting as a student director for two junior show choirs at her school. After high school, Elsa plans to attend the University of Nebraska-Lincoln to study history and law.

Kristen Tomjack attends Wahoo High School and serves as her class president. She is also the president of her Family, Career, and Community Leaders of America (FCCLA) chapter and is vice president of the Student Council. Kristen is involved in varsity golf and cheerleading, National Honor Society, and is a Junior Mates mentor. She plans on attending college and double majoring in international relations and political science.

Chosen as alternates to the 2015 program were Calvin Wineland, a resident of Cambridge, who attends Cambridge High School and Elijah Kennedy, a resident of Brownville, who attends Auburn High School.
The chief educational officer in each state selects the delegates after nomination by teachers and principals. This year’s delegates were designated by Matthew Blomstedt, Commissioner of Education.

While in Washington the student delegates attend meetings and briefings with Senators, House Representatives and Congressional staff, the President, a Justice of the Supreme Court, leaders of cabinet agencies, an Ambassador to the United States and senior members of the national media. The students will also tour many of the national monuments and several museums and they will stay at the historic Mayflower Hotel in downtown Washington, D.C.

In addition to outstanding leadership abilities and a strong commitment to volunteer work, the student delegates generally rank academically in the top one percent of their states among high school juniors and seniors. Now more than 5,000 strong, alumni of the program continue to excel and develop impressive qualities that are often directed toward public service. Among the many distinguished alumni are: Senator Susan Collins, the first alumna to be elected U.S. Senator; Senator Cory Gardner, the second alumnus to be elected U.S. Senator and the first to be elected to the U.S. House of Representatives; New Jersey Governor Chris Christie, the first alumnus to be elected governor; former Chief Judge Robert Henry, U.S. Court of Appeals for the Tenth Circuit; former Ambassador to West Germany Richard Burt, and former presidential advisors Thomas "Mack" McLarty and Karl Rove. Additional notables include former Lt. Governor of Idaho David Leroy, former president of the Progressive Policy Institute Robert Shapiro, military officers, members of state legislatures, Foreign Service officers, top congressional staff, healthcare providers and university educators.

"There is a debt of service due from every man to his country, proportioned to the bounties which nature and fortune have measured to him." --Thomas Jefferson

Like Jefferson and many of our other Founding Fathers who have gifted us with their words of wisdom, most teachers and parents also well understand the value of education, leadership, and public service, and make every effort to instill these qualities into their children. They truly are the keys to success.

Today, Wahoo High School celebrates an impressive honor which has been bestowed on one of its seniors.

Kristen Tomjack has been selected as one of only two students to represent the state of Nebraska as a delegate to the United States Senate Youth Program (USSYP) to be held in Washington, D.C. March 7-14, 2015.

In addition to the opportunity to spend a week in Washington experiencing her national government in action, Tomjack will also receive a $5,000 college scholarship for undergraduate studies!

The USSYP was founded in 1962 through Senate Resolution, and each year two of the highest-achieving students from each state, the District of Columbia and the Department of Defense Education system overseas are selected through an extremely competitive merit-based selection process held at the state departments of education nationwide.

WHS American Government Instructor Ryan Mueller explained that to qualify for this honor, Tomjack had to fill out an application with a reference, take an extensive civics test, and write an essay on a current political topic.

"The award is extremely competitive in the state," Mueller commented. "I couldn't be prouder of Kristen! She is extremely deserving of this award! She is an outstanding student and citizen and will represent both Wahoo and Nebraska well at our nation's capitol this spring."

During her visit to our nation's capitol, Tomjack will hear major policy addresses by Senators, cabinet members, officials from the Departments of State and Defense and directors of other federal agencies, as well as participate in a meeting with a Justice of the U.S. Supreme Court. All transportation, hotel and meal expenses will be provided by the Hearst Foundations.

"I hold great pride and excitement for Kristen Tomjack and her selection to the United States Senate Youth Program," said WHS Principal Jason Libal. "Kristen will be a tremendous representative of our school, community and state during her time in D.C. This honor is well deserved due to Kristen's incredible work ethic, character, and integrity. These are characteristics that will not only serve Kristen well in this program, but also in life. Great job Kristen. You have made Wahoo Public Schools proud!"

Congratulations Kristen on achieving this honor!

The United States Senate Youth Program (USSYP) is an intensive week-long educational experience and scholarship sponsored by the United States Senate for outstanding high school students who are interested in pursuing careers in public service. If you are a high school junior or senior already serving as an elected official in your student body or other state or community organization, you may already be qualified to apply.

The mission of the United States Senate Youth Program is to provide a yearly opportunity for selected students to gain an in-depth view of the Senate and the federal government overall as well as a deeper understanding of the interrelationship of the legislative, judicial and executive branches. The program provides a foundation of knowledge and encouragement for those considering a future of public service on the local, state or national level.

The USSYP is a true partnership among government leaders, state and national education leaders and America’s future leaders. Two high school juniors or seniors are selected each year from each state, the District of Columbia and the Department of Defense Education Activity to serve as delegates to Washington Week which generally takes place the first or second week of March.

During Washington Week the student delegates meet and learn from the highest level elected and appointed officials in Washington. The delegates attend briefings and meetings with Senators, the President, a Justice of the Supreme Court, cabinet members, federal agency leaders and senior members of the national media. At least seventeen military officers, representing each of the military services and the Coast Guard, serve as mentors for the students during the week. The military mentors are competitively selected by Department of Defense staff, representing one of the longest standing partnerships between the Department of Defense and a national youth program.  This in-depth exposure to leadership at the highest levels is precisely what fuels and sustains the delegates’ commitment to making a difference in their country, communities and schools. (see Delegate Essays)

The 104 student delegates also receive a $5000 undergraduate college scholarship to the college or university of their choice with encouragement to continue coursework in government and history. The Hearst Foundations have fully funded the USSYP since its inception, including transportation, accommodations, meals and individual college scholarships – no government funds are ever utilized.

The selection process begins when public and private high school teachers and principals nominate qualified students starting in early fall. To qualify, students must hold student body office or another elected or appointed position in their communities and show academic interest and aptitude in government, history and politics. Selection processes vary by state, but many states administer a comprehensive public affairs, government and history test prepared annually for the program by a college professor of political science. States may also ask for additional essays and/or personal interviews. The chief state school officer in each state makes the final selection of two delegates and two alternates by December 1. The program is merit-based and highly competitive and the chosen delegates are consistently of the highest caliber in the nation. 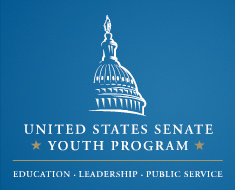