Wahoo junior, Matt Dobesh, competed in the Nebraska Poetry Out Loud State Finals at the Sheldon Art Gallery on the UNL campus on Saturday, March 12.

Dobesh was one of 13 finalists.

Poetry Out Loud does not have classes, so the small and large schools compete against each other.

All the finalists recited three poems. Four judges determined the winner based upon criteria such as accuracy, physical presence, voice and articulation, dramatic appropriateness, evidence of understanding, and overall performance.

“It was a tight competition,” stated Wahoo High School English Teacher Larry Fangman. “The winner, freshman Maggie Harris of Thayer Central Community Schools, was a deserving champion, but there were seven or eight students who gave such powerful performances, that it had to be tough to pick the winner. Matt was one of the finalists in the mix for the top three places. He showed a lot of improvement over last year, and he really benefited from being in Poetry Out Loud for a second year.” 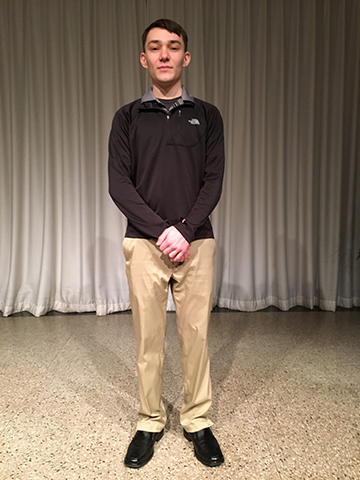 WHS junior Matt Dobesh finished in the top 5 at the Feb. 13 Poetry Out Loud Regional competition at Joslyn Art Museum.
Dobesh advances to the Mar. 12 State Finals @ Sheldon Museum of Art in Lincoln.

WHS junior Matt Dobesh finished in the top five at the Omaha Poetry Out Loud Regional on February 13, 2016, and will move on to the State Finals at the Sheldon Museum of Art, Abbott Auditorium (12th and R Street, UNL Campus, Lincoln) on Saturday March 12 at 1:00 p.m.

The event is free to the public, and Wahoo Warrior supporters are encouraged to attend.

Dobesh is one of 13 finalists, and the winner of the state competition will win a free trip to Washington D.C. for the National Poetry Out Loud Finals.

Dobesh, who competed at regionals as a sophomore but did not advance to the State Finals, improved on his sophomore finish by reciting the poems “The Charge of the Light Brigade” by Alfred Lord Tennyson and “The Last Laugh” by Wilfred Owen.

“Last year’s experience paid off for Matt this year. He added a longer, more difficult poem to his arsenal, and his improved use of facial expressions added a lot to his rendition of the poems,” said Wahoo Poetry Out Loud Sponsor Larry Fangman. “I hope a lot of people can make it to Lincoln to see Matt perform in the finals. Poetry Out Loud is a different kind of competition, but the tension is high and builds as the poets go through the different rounds.”

At State, each of the 13 finalists will recite two poems. Then the top five students will come back and recite a third poem, after which the state champion will be determined.