Wahoo's Jake Ruzicka goes up for a shot against an Elkhorn South defender during a game in the Bishop Neumann Holiday Tournament last year. 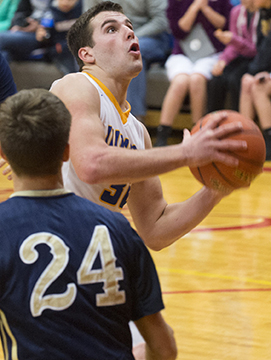 Wahoo's Jake Ruzicka goes up for a shot against an Elkhorn South defender during a game in the Bishop Neumann Holiday Tournament last year.

Ruzicka more than a shooter for Wahoo

Some nights, it almost seems too easy, and others, shooting a basketball can be a bit more troublesome.

Jake Ruzicka seems to have more of the former, averaging 17.5 points a game for Wahoo this season.

"As the game goes on, you can tell if it's going to be a good night or a bad one. Some nights, it feels like you're throwing a pebble in the ocean and it feels really good," the 6-foot-2 senior said. "If not, you have to try to take higher-percentage shots or go to the rim.

"I think my play around the rim and getting to the hole is my biggest improvement. It's gotten easier as I've gotten older. I'm definitely more confident now."

His ability to do that has improved throughout his career for the Warriors, according to coach Kevin Scheef.

"It's been neat to see the whole maturation process," he said. "He's always been a good shooter, but he just kept getting better at the other things.

"On the floor, he's really good and he's gotten so good taking the ball to the rim. When he gets a head of steam, he's pretty tough to stop."

"It takes into consideration number of rebounds, steals, assist and scoring," Scheef said. "You get points for offensive rebounds or assists or taking a charge and you lose points for turnovers, missed shots, that sort of thing. It's a formula for determining a player's complete contribution on the floor.

"Jake always scores in the 60s and 70s, which is really good. He's a pretty well-rounded player."

Ruzicka said he takes pride in his productivity numbers.

"I love when people compliment me that I'm a complete player," he said. "When I was younger, my productivity was low. I'm succeeding on that chart now.

"I learned to not play intimidated. My freshman year, I didn't feel like I did that. It was a process, not just one moment where it changed."

Practice was important, but even more critical was game experience.

"The more I played, the better it helped. I had great teammates when I was young to build me up and keep me confident," Ruzicka said. "I try to be a good leader now. Since I'm a four-year starter, I know what's going on."

In addition to the physical skills that have improved through hours of work, Scheef said Ruzicka's mental approach is improved.

"He used to be a kind of quick temper and that would get him down, because I'd have to get him out of a game to cool down," Scheef said. "Now, he's more mature and sees the big picture."

Ruzicka said that has helped him be a better, more consistent player.

"My freshman year I would get frustrated. I used to get mad about a foul or something silly or a bad play," he said. "I would have to remind myself that something little wasn't really a big deal."

Ruzicka, who was second-team Class C-1 all-state in basketball last year, said he will likely play football in college. He caught 33 passes for 636 yards and eight TDs for the Warriors this year.

"I'll probably play football somewhere and study ag business. I've come to love it and I think I may be better at it," Ruzicka said. "I would never have thought that. I always thought basketball was what I would do in college.

"So this is my last basketball season and I want to make the best of it and make a lot of memories."

Tale of the tape: Jake Ruzicka

Favorite shot: "I really like shooting the three-pointer (he's 3-for-6). But we have plenty of guys who can do that and we need a balanced game between twos and threes."

Rebounding: "It's all mentality. Work hard and tell yourself you're going to get it. It helps being able to read the ball off the rim and see which way it's bouncing."

Blocking shots: "Most are around the block, when people are going for a layup, I come across and sometimes I block it."

Fouls: "You still want to play defense but if you have a couple of fouls, you have to let some stuff go around the rim and be careful when you're rebounding."

Ruzicka more than a shooter for Wahoo