WHS senior Tschida Johnson was recently selected as Runza's Student of the Week! 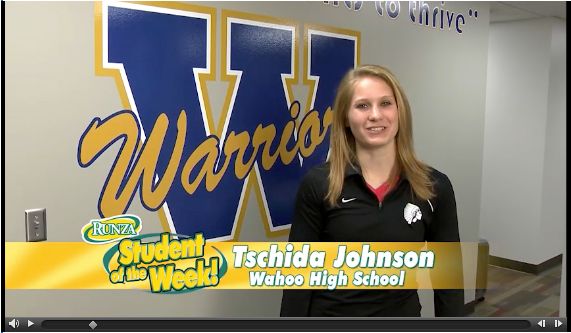 Congratulations to WHS senior Tschida Johnson, who was recently announced as Runza's Student of the Week!

"I nominated Tschida for the Runza Student of the Week because she is the consummate student/athlete at Wahoo High School. Not only is she a 4.0 student and a member of the National Honor Society, but she also has been a state qualifier in cross country, basketball, and track," commented WHS Science Instructor Steve Shannon. "She is a mentor at the elementary school and assumes leadership roles for numerous clubs and organizations at Wahoo High School. Tschida is an excellent candidate to receive the Runza Student of the Week!"

Johnson received a plaque and a $500 college scholarship for her excellence in the classroom and school activities. She is the daughter of Rod and Cherie Johnson of Wahoo.

The video below was featured on the Channel 7 KETV news broadcast on Sunday night, Nov. 10.

Congratulations Tschida on this honor!