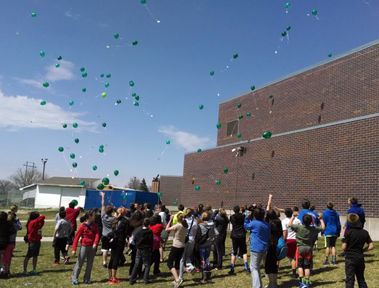 The program is focused on identifying negative behaviors that impact classroom learning, and the building of a positive school culture. Students learned and practiced skills that can be used to stop or inhibit those negative behaviors that, if left unchecked, could develop into bullying behaviors. The students learned that "Direct, Delegate and Distract" are three key reporting actions that victims and bystanders alike should employ to address unwanted behavior or actions.

Led by Stacey Lichtenberg, a community education coordinator from Fremont, WMS students learned that negative behaviors like harassment and bullying can impact a student’s ability to succeed in school. Those negative behaviors impact all of the other students around who either feel pressure to conform to concerning behaviors or who are in fear that they will become the next target. They impact teachers, who must spend valuable class time managing students’ behaviors. They impact school counselors who will spend as much time trying to help a student deal with a bully or with a concerning relationship as they do academic planning with students.

The Green Dot program is designed to address unwanted behaviors by providing students with tangible, realistic skills to use and by mobilizing bystanders from across the entire middle school community.

According to recent statistics, a person is bullied every seven seconds in the United States. The Green Dot program identifies those negative actions or behaviors as "red dots." Further, statistics confirm that, on average, every bullying action is witnessed by fifteen bystanders. The Green Dot program provides victims and bystanders with "green dot" skills and challenges schools to strive for a "green dot" culture, one that doesn't tolerate or accept unwanted negative actions or behaviors.

To celebrate the conclusion of the training, all WMS students participated in a balloon release that coincided with a national campaign to combat bullying. The "Stand for the Silent" campaign was started in 2010 by a group of students from Oklahoma State University after they heard the story of Ty Field-Smalley. At eleven years-old, Ty took his own life after being suspended from school for retaliating against a bully that had been bullying him for over two years.