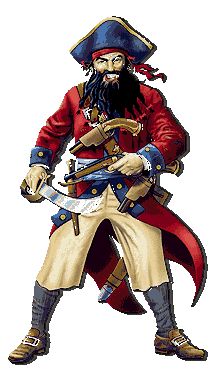 Beyond the Folklore of Piracy

On Friday, Oct. 21, Mike Dunn, a custodian at Wahoo Elementary School and an avid historian, spent time teaching Wahoo Middle School 8th graders about the true life of a pirate.

Dunn, who was once a museum curator, has collected hundreds of artifacts and stories about everything from the golden age of piracy (early 1700's) to the Civil War.

Students were able to hear Dunn talk about how pirates intimidated their enemies by firing cannon shots across the bow of the enemy ships. They even got to hold some of the replicas that Dunn has collected supporting his hobby: a 6 ft. musket, a cannonball, a primitive grenade, a cutlass and a slingshot.

Dunn specifically addressed one of the most famous of pirates, Blackbeard, sharing that the intimidating figure flew a menacing flag, portraying a demon
holding a sword.

In addition to weaving wet match (an object similar to a cannon fuse) into his beard before attacking an enemy, he mentioned that a smoothbore gun, like one of the many that Blackbeard was known to carry, could shatter a saucer at twenty-five yards.

"The kids need to hear these stories," Dunn stated to 8th grade American
History Teacher John Harris. "Once we old guys are gone, it will up to the kids to carry on the love of these subjects."

Beyond the Folklore of Piracy