SPACE NEEDS YOU: Former astronaut and fighter pilot Duane “Digger” Carey speaks to about 300 people at the Wahoo Performance-Learning Center for the start of the Space in the Community program.
Launch the media gallery 1 player

SPACE NEEDS YOU: Former astronaut and fighter pilot Duane “Digger” Carey speaks to about 300 people at the Wahoo Performance-Learning Center for the start of the Space in the Community program.

"I would like to thank Dr. Josh Snyder, Superintendent Brandon Lavely, the Wahoo Foundation and directors Eric Gottschalk and Bill Reece, Astronaut Digger Carey, the Space Foundation crew and everyone else that came together to make this happen.

We have such a tall order as a civilization to tackle the challenges before us. Whether it be energy, the environment, farming, medicine, aerospace or our fellow humans in need. Who will be our future problem solvers?

We are a people of natural curiosity, pioneers at heart, explorers and creators. I believe we are meant to be a space faring civilization, a star people. Space is the final frontier, our infinite frontier. So while we’re solving the problems here on Earth, let’s get out there and build on our progress! What will we learn? What will we find? Who might we encounter out there? And won’t it be great to have a place to go if we need to.

And you students, YOU are the key to our future. Your minds, your creativity galvanized with engaging and interesting education in Science, Technology, Engineering, Art and Math are absolutely essential for the future of our civilization here on earth, and BEYOND.

Thank you and I hope students and teachers alike carry away a spark, a thirst for STEAM education and an interest in Space to carry our civilization into the future."

--Jim Gorman, Chairman of the Board - the Gorman Foundation (donors to this program)

WAHOO – The children of Wahoo are the future of space exploration, according to a former astronaut.

“Space is full of incredible, endless, infinite opportunities for all of us here on earth,” said Duane “Digger” Carey during a visit to the community of Wahoo last week.

The former astronaut was in Wahoo to bring the story about his career as a fighter pilot and astronaut and his message about the future of the space program through the Space in the Community program, which is geared toward inspiring youth about the wonders of space and reignite the imagination of the community.

Wahoo Public Schools teamed up with the Center for Innovation and Education, part of the Space Foundation, to bring Space in the Community to Wahoo.

“The Space in the Community program is designed to inspire students about the wonders of space and to reignite imagination in all of the community in the hopes of inspiring the next generation of explorers,” said Josh Snyder, WPS director of learning, as he introduced Carey.

Carey spoke to about 300 men, women and children at the Performance Learning Center at Wahoo High School on Oct. 27 to kick off Space in the Community. 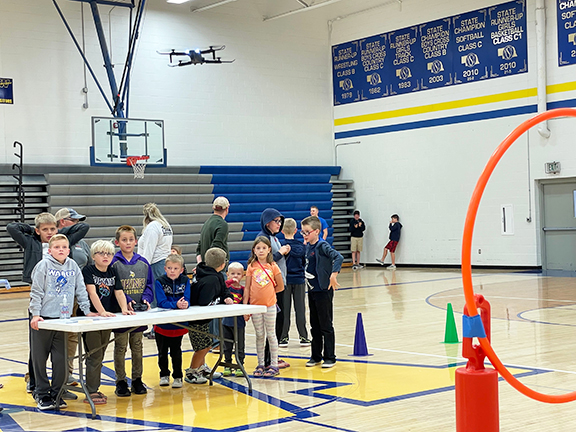 Carey’s presentation finalized an evening of STEAM (science, technology, engineering, art and math) activities that were meant to stimulate the youngsters’ imagination and curiosity. Robotic spheres, drones and rockets were part of the fun.

----------
Drones were one of many different STEAM activities available to students during the 2022 'Space in the Community' Night in the Performance-Learning Center.
----------

The audience listened intently as Carey told the story of his path to becoming an astronaut. It wasn’t easy.

He grew up in the projects of St. Paul, Minnesota, the oldest child of a teenage mother and an absentee father. He didn’t like school and didn’t do well in most subjects – including math.

“Math is the killer of dreams,” Carey said with a smile, but also with some truth. Because he didn’t try hard in school, math and other subjects nearly killed his dream of flying jets and going to space.

After barely making it through high school, Carey traveled the country to see what opportunities there were. He realized he didn’t want to spend his life repairing typewriters – the job he had in California – or working in a bar, which he did back home in Minnesota.

While tending bar one night, Carey served an Air Force fighter pilot. The pilot’s stories awoke a dream in Carey he didn’t realize he had – to fly jets.

The dream was possible, but only if Carey went to college. He was still not a big fan of education in general, but his new wife, Cheryl, told him the straight facts. If he didn’t go to college, he couldn’t fly jets.

He realized she was right, so he went back to school.

“I wanted to fly jets so bad I would do anything,” he said.

Carey enrolled at the University of Minnesota in Minneapolis and got a degree while working 30 hours a week. It wasn’t easy.

“College for me was not a fun thing,” he said.

But he kept at it and left with bachelor’s and master’s degrees in aerospace engineering. Hours after submitting his thesis, he was on the road to flight school in Texas.

Carey was having the “time of my life” at flight school. But one night, in the cold Texas air, he looked up at the stars and realized his dreams could reach even further.

“Looking at the stars, I thought I’d do anything to be an astronaut,” he said. 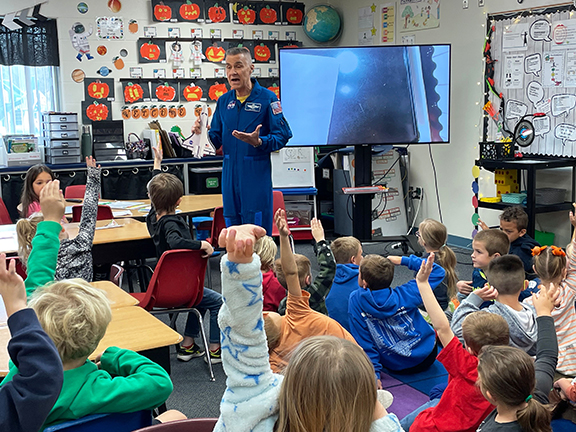 After logging 4,300 flight hours as an Air Force pilot on 35 different aircraft all over the world, Carey joined NASA in 1996. Two years of training followed to put Carey in the pilot seat of the Columbia space shuttle.

Carey was part of the STS-109 crew that serviced the Hubble telescope. The 2002 mission lasted 10 days and brought a new power unit, camera and solar arrays to the telescope.

Two years later, Carey left NASA to embark on a mission to educate youth about space and to impart wisdom he gained from his struggles in life so others don’t have to go through what he did.

He advised the kids to start planning their future now and to work extra hard in those difficult subjects.

“Take your effort in math and double that,” he said.

The former astronaut-turned-educator told the children and their parents that growing up in this part of the country, and in Wahoo in particular, gives them a set of skills that NASA and other space exploration organizations are looking for.

“We need each and every one of you to propel America into the future and keep it great,” he said.

Carey also autographed photos after the presentation and visited classrooms the next day to work with students at Wahoo Public Schools in multiple hands-on learning opportunities.

The Wahoo Public Schools Foundation and the Gorman Foundation provided financial support for the Space in the Community program.

Suzi Nelson is the managing editor of the Wahoo Newspaper. Reach her via email at suzi.nelson@wahoonewspaper.com 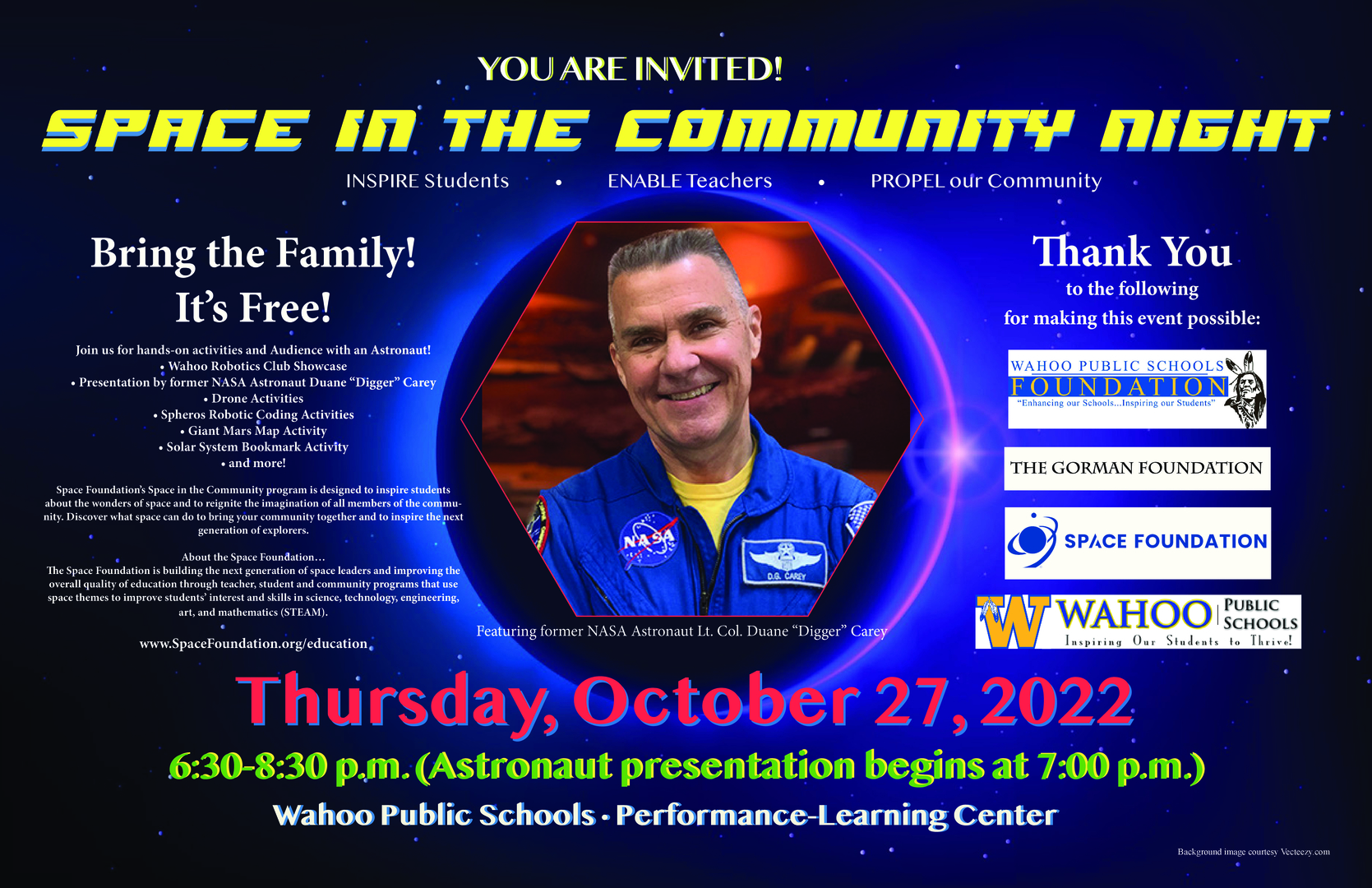