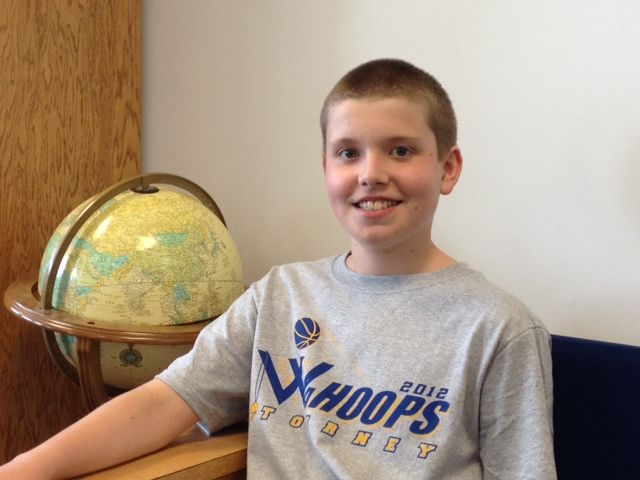 WMS 7th Grader Competes with the Top 100 in Nebraska

CONGRATULATIONS Tate Peterson for finishing in 5th place in 2012 State Geographic Bee, held on Saturday, March 30 on the campus of the University of Nebraska at Omaha! The annual event is organized by the National Geographic Society.

Click HERE to read the Omaha World-Herald's coverage of the event.

The average person may not know that the capital of Botswana is Gaborone. Odds are, though, WMS 7th grader Tate Peterson would!

Peterson has qualified for the 2012 State Geographic Bee, organized by the National Geographic Society!

Earlier this semester, Wahoo Middle School hosted a Geography Bee preliminary competition, where over 200 WMS students took tests to demonstrate their knowledge of geography. From there, the top 30 students advanced to a semifinal round, and finally the top three completed in a finalist round. Peterson came out on top!

All local winners from around the State were then required to take a rigorous state-qualifying exam.  When all was said and done, Peterson qualified as one of the top 100 students from across Nebraska!

"I am super excited for Tate to be representing our school at this competition," said local Geo Bee Sponsor Linda Walker. "He really knows his stuff!"

The State competition will be held on Friday, March 30 on the campus of the University of Nebraska at Omaha. The winner of the State Bee will then advance to the May 22-24 national finals in Washington, D.C.

Up to 100 fourth- to eighth-graders in each of the 50 states, District of Columbia, U.S. Atlantic and Pacific territories and Department of Defense Dependents Schools have qualified for the state Bees. Each state winner will receive $100, "The Complete National Geographic" on DVD and an all-expenses-paid trip to Washington, D.C., for the national finals May 22-24 and the chance to be crowned National Geographic Bee champion.

First prize in the national competition is a $25,000 college scholarship and lifetime membership in the National Geographic Society. Second- and third-place finishers receive $15,000 and $10,000 college scholarships, respectively. Additionally, the national winner will travel (with one parent or guardian), all expenses paid, to the Galápagos Islands to experience geography firsthand through up-close encounters with the wildlife and landscape of the islands on an expedition aboard the National Geographic Endeavour. Travel for the Galápagos voyage is provided by Lindblad Expeditions and National Geographic.

The top 10 national finalists for 2012 along with next year's top 10 will be eligible for selection for the three-person team to represent the United States at the international National Geographic World Championship in 2013, to be held in St. Petersburg, Russia.

John Fahey, National Geographic chairman and CEO, said "National Geographic's mission is to inspire people to care about the planet and its people. Through the National Geographic Bee and our other activities, we hope to foster a lifelong passion for learning about the world and its diverse cultures, environments and resources. By expanding students' knowledge of people, places and events, we hope to encourage their sense of interconnectedness to others around the globe and to motivate this next generation to be responsible caretakers of our planet."

Google is sponsoring the Bee for the fourth year. "The National Geographic Bee provides students with a unique opportunity to showcase their knowledge about the world around them. Our teams at Google are thrilled that young minds across the globe are using Google Earth as an educational tool to deepen their understanding of both natural and human geography. Over the past several years, the competition has demonstrated the power of technology to foster learning and inspire future generations, and we're proud to sponsor the program again this year," said Brian McClendon, vice president of engineering, Google Earth and Maps.

The state Bees are the second level of the annual National Geographic Bee. The first level began last November with contests in nearly 12,000 U.S. schools, in which millions of students participated.

The championship round of the 2012 National Geographic Bee — moderated by "Jeopardy!" quizmaster Alex Trebek for the 24th year — will be held at National Geographic's Washington, D.C., headquarters on Thursday, May 24. National Geographic Channel and Nat Geo WILD will air the final round that evening at 8 p.m. ET/PT. It will be aired later on public television stations; check local television listings for dates and times.

Visitors to the Bee section of the National Geographic Society website, www.nationalgeographic.com/geobee, can hone their geography skills with the GeoBee Challenge game.

The National Geographic GeoBee Challenge app, with more than 1,000 questions culled from past Bees, is available from the App Store on iPhone, iPod touch and iPad, or in the Android Market.

About Plum Creek
Plum Creek is the largest and most geographically diverse private landowner in the nation with approximately 6.6 million acres of timberlands in major timber producing regions of the United States and wood products manufacturing facilities in the Northwest. For more information, visit www.plumcreek.com.