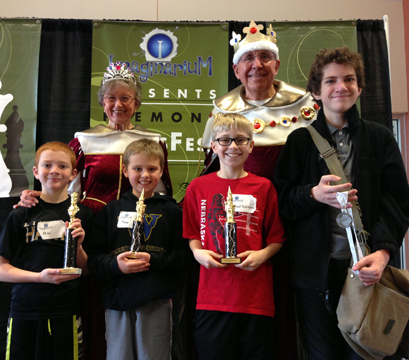 The Wahoo Chess Club competed at the Fremont ChessFest at Midland University on Saturday, April 11.

Third grader Jesse Stebbing led the Wahoo team with a first place finish in his group of ten players!

“This is the best chess meet we go to,” said Wahoo Chess Club Sponsor Larry Fangman. “They have real people dressed up as a king and queen, and they have a chessboard with life-sized pieces for the kids to play chess on in-between their matches, and each entrant receives a t-shirt. It is just a fun meet. Having so many students place so high when each section had ten players was an impressive accomplishment.”

The Wahoo Chess Club ends its season on Saturday, April 25 with an elementary/middle school meet at Brownell-Talbot in Omaha.