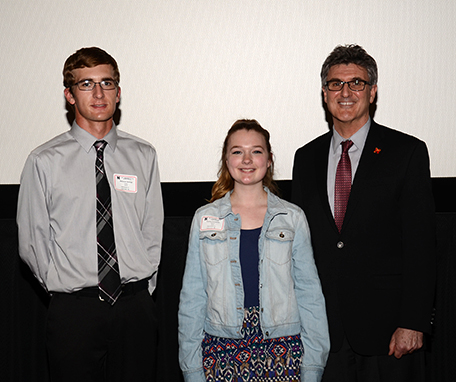 WHS junior Sydney Holdsworth honored for her talents in music

The Nebraska Young Artist Awards annually recognize 11th grade students from Nebraska who are gifted and talented in the areas of visual art, dance, music, theatre, and film and new media. These students exemplify the pinnacles of creativity in one of the fine and performing arts.

Fifty-three students from more than 30 high schools across the state were selected to participate in the special day of activities on Wednesday, April 5, 2017, at UNL. Among those honored was WHS junior Sydney Holdsworth, for her talents in music.

Students applied for the recognition and submitted an example of their work. Applications were received from 126 students across the state. Hixson-Lied College of Fine and Performing Arts faculty chose the 53 students who came to UNL on April 5 to be recognized.

Students selected to participate in the Nebraska Young Artist Awards were asked to nominate the teacher who provided them with the greatest amount of mentoring and support in the development of their special talents.

The day concluded with an awards ceremony in the Sheldon Museum of Art's auditorium at 3 p.m. Students received a certificate, as well as a very special original piece of artwork commissioned for this event and created by a School of Art, Art History & Design printmaking student Hannah Demma.

All of the recipients of the 2017 Nebraska Young Artist Awards. Fifty were in attendance at the April 5 awards ceremony.