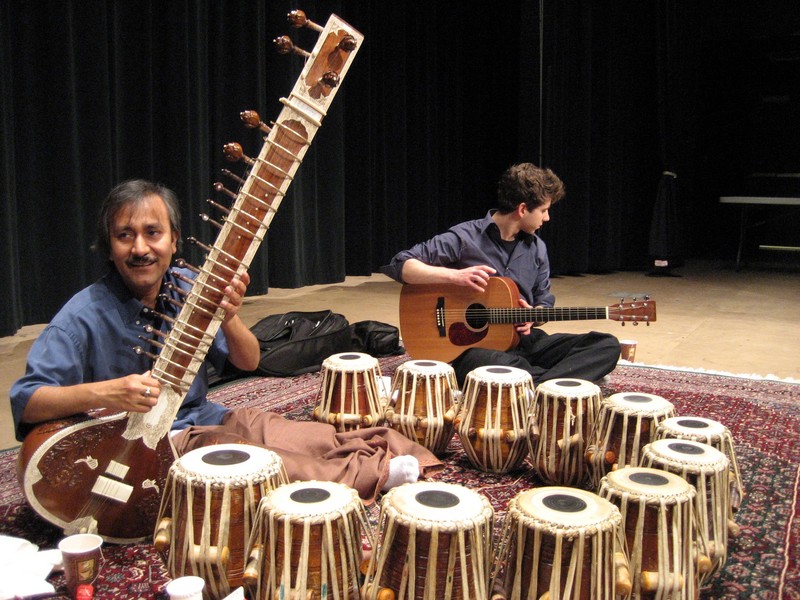 This year, WMS/WHS Band Director Eric Snyder is focusing on the phrase, “It is the Journey that matters in the end,” by Ursla Leguin. The experience of the journey is what students will always take with them the rest of their lives. On Tuesday, September 18, one part of the journey became very exciting, as the world got a little bit smaller for Wahoo Middle and High School band students. On this day, they hosted a visitor from India, Sandip Burman, a world-renowned tabla and sitar musician.

Burman came to the classroom to spread his Indian Folk Music. He started by performing “Evening Songs” on the sitar with his assistant accompanying him on the guitar. The sounds were quiet and very relaxing. He then moved to the tabla drums and explained how Indian music is different from western music, from the solfege they use to the odd meters.

The Wahoo band students were not only treated to an extraordinary performance, but they also got to see how deeply top performers in the world concentrate on their skills.  Talking was strictly forbidden and those not following this direction would be asked to leave. Any movement was held to a minimum.

“It took a lot of self-discipline from the students to sit that still and quiet for an hour. These kids did a wonderful job of listening and making our visitors feel welcomed.  I’m very proud of them,” Snyder commented.

Sandip Burman also had the students try to clap the beats while he played so that they could feel the meters.

“It was amazing how fast he could play, and then to play in meters of 8½ beats or 14 beats,” said Snyder, “He lost me! I knew that Indian music was in these different meters but I never knew how it came together. After the session, Mr. Burman helped figure it out.”

At the end of the session, Burman pointed out to the students to “work hard and follow your heart.”  He explained how he started out just like them and then he decided to be the best. It doesn’t make any difference if you want to be a professional musician or an accountant. Whatever your desire in life is, make it your best effort.

The Wahoo band students would like to thank our high School Principal Mr. Chris Arent and our middle school principal Mr. Jason Libal for being flexible and supporting events like this at our school.

Sandip Burman, a native of Durgapur, India, is an accomplished tabla player. His love and dedication for tabla began at the age of six when Pandit Shyamal Bose of Calcutta, one of India's distinguished tabla maestros, accepted him as his disciple. Sandip's performances are marked with spontaneous innovation and tonal purity even when he is delivering complex rhythmic patterns at dazzling speeds. His repertoire is vast...it includes both commonly and rarely played rhythms.

Foremost Indian Classical musicians such as Pt. Ravi Shankar, Pt. Jasraj, Mrs. Laxmi Shankar, Pt. Hari Prasad Chaurasia, Pt. Debu Chaudhuri , Pt. Rajeev Taranath, Pt. Budhadev Dasgupta, and Shri Chitresh Das have been gracious enough to let Sandip share the stage with them - an incredible honor for one so young. Performing with the above at such venues as the Ali Akbar Music College Festival, the Monterey World One Festival, the San Francisco Asian Museum of Art, the New Mexico Cultural Art Forum, the Chandham School of Dance, the International Bengali Conferences in L.A. and Philadelphia, and the AAPI Festival in Florida have enabled Sandip to achieve recognition for his playing.

Recently Sandip has been collaborating and touring with Bela Fleck. He is one of the guest artists on the Flecktone's new Grammy award-winning album Outbound. While exploring world music and jazz, Sandip has had the honor of playing with jazz legends Jack DeJohnette and Al DiMeola. in addition to Howard Levy, Paul McCandless (from the group Oregon), Andy Narell, Victor Wooten, and many others.

Always in search of new challenges, Sandip worked with Danny Elfman and contributed to the soundtrack of Tim Burton's film, Mars Attacks and an IBM commercial. Sandip has recorded with Dr. L. Subramaniam and is showcased on the album Global Fusion from Warner Brothers. He has been a visiting faculty member at the Rotterdam Conservatory in Holland. Sandip has toured and taught in the United States, Europe, Mexico, North Africa, Israel, and Canada.

To the discerning ear, Sandip's skills in accompaniment, combined with the intensity of his solo styling, demonstrate that he is a musician par excellence. His talent and creativity are clearly evident making his performances enjoyable and leaving his audiences in awe of the artist and his art form.