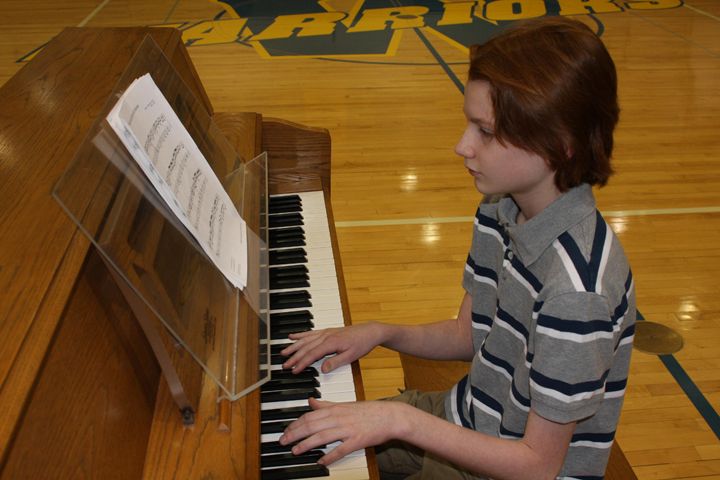 May 14, 2010by DeManda Arkfeld, Wahoo Newspaper (posted with permission)

It all started with a piano piece played by Lukas McIlhaney’s second grade teacher.

Deb Rubesh, a Wahoo Elementary School second grade teacher, played “Canon in D” for Lukas’s class and he fell in love with it.

“I wanted to learn how to play piano because Mrs. Rubesh was playing classical music and I really liked it,” Lukas said.

Lukas’s parents, Nate and Mary McIlhaney, signed him up for classes with piano instructor Jan Zimmerman.

He started his lessons and it was soon apparent that Lukas had a natural talent.

“He never struggled,” Mary said. “She had to teach him from scratch how to read music and where to put his fingers. He came up with it easily.”

Lukas began lessons with Jan when he was in the third grade.

He still has a soft spot for “Canon in D” but also enjoys many other classical selections.

His two favorite composers are Mozart and Beethoven.

“I not only play the music, but I listen to a lot of if as well,” Lukas said.

The emotion that can be put into classical music is one of the reasons Lukas is drawn to it.

“You can put a lot into a classical piece,” he said.

Lukas was able to share his talent with the Wahoo Middle School on April 29 at an assembly. The assembly was held to present Lukas with a plaque in honor of being chosen Omaha’s 90.7 KVNO Classical Kid for April 2010.

He also received a gift card to the Bookworm, a bookstore in Omaha.

“I was excited and surprised to be chosen,” he said.

Along with the honor, the radio station also gave the McIlhaney family tickets to various area performances throughout the year. Each group of tickets is enough for Lukas, his parents and his younger sister, Elise, to attend.

Lukas plays the piano and the flute. He started playing the flute in his class band.

He has participated in the Youth Conservatory Orchestra in Omaha and plans to start violin lessons this summer.

His parents stated that classical music can be heard throughout the house.

Nate added that he enjoys all kinds of music and had listened to classical music on occasion before his son’s interest, but Mary didn’t always share the same interest.

“Before Lukas started playing, I had no use for it,” she said. “I have an appreciation for it now.”

Mary added that she is grateful to her son for exposing her to it.

Lukas not only listens and plays classical music, he has also been writing his own pieces.

“There are a lot of segments and they all sound really good,” Nate said.

According to Lukas, none are quite finished yet.

Classical isn’t all that Lukas plays. He has also accompanied for school programs.

“I think everyone should get into music programs of some kind,” Lukas said. “I like it because it is really fun.”