WHS senior Michael Leffler (right) performs before the WHS student body in a concert on Wed., May 7, along with noted Omaha singer and guitarist Matt Whipkey. The concert featured songs completely composed (music & lyrics) by Leffler during his 2nd semester creative writing class. 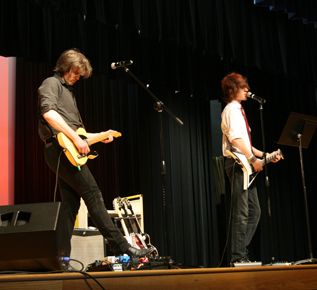 WHS senior Michael Leffler (right) performs before the WHS student body in a concert on Wed., May 7, along with noted Omaha singer and guitarist Matt Whipkey. The concert featured songs completely composed (music & lyrics) by Leffler during his 2nd semester creative writing class.

Jennifer Leffler popped her head in WHS Language Arts Instructor Larry Fangman’s door a few minutes before school started. Her son, Michael, was transferring to Wahoo High School, and she wanted to know if he could write songs in Fangman’s creative writing class.

Fangman’s response: “I’m sure we can work something out.”

Leffler enrolled in creative writing second semester, and by that time Fangman had heard other students, along with WHS Band Director Jason Smith and WHS Vocal Director Julie Anderson, talk about how talented Leffler was as a guitarist and singer.

Fangman had just read an article in the Omaha World-Herald about Omaha native Matt Whipkey and his new album, Penny Park (The World-Herald named the album one of the ten best albums of the year.).

Fangman knew Whipkey because he had taught guitar lessons to his two children ten years ago. He knew Whipkey was a singer/songwriter, noted for his guitar playing. Whipkey was also the winner of the 2013 Omaha Entertainment and Arts Awards Artist of the Year and Album of the Year.

Fangman realized that Whipkey would be the perfect mentor for Leffler.

Whipkey came in every Tuesday to work with Michael. The rest of the week Leffler used class time to work on writing his songs.

“He works hard on his music and is a skilled guitar play and vocalist. I really enjoyed working with him,” Whipkey commented. “[The final concert was] a lot of fun!”

The semester-long collaboration culminated in Leffler’s final class project: a five-song concert in front of the WHS student body. Leffler wrote the music and lyrics for the five songs he performed, with Whipkey backing him on guitar and vocals.

The students, along with Leffler’s mom and grandmother, enjoyed the concert. After the performance, Leffler’s mom knew the answer to her fall question: Michael could not only write songs in creative writing class—he could write great songs!

In case you missed it, the concert is posted below: