After they took a little time, a little time to think things over, a Lied Center for the Performing Arts panel on Friday found a local choir to back Foreigner during the band’s performance of “I Want to Know What Love Is” at the Lied Center on Nov. 14.

Royalty, the show choir at Wahoo High School, will be joining the band onstage after rushing to beat the deadline to submit a video for the competition. On Friday, after getting the call from the Lied saying Royalty had won, vocal music director Julie Baker-Anderson went to the school’s office to get it announced over the PA system.

“And from the office, I heard screaming through the hall,” she said. “We are on cloud nine.”

On their theater tour, Foreigner has been summoning local choirs no bigger than 25 members to sub in for the gospel choir that joined the jukebox heroes on the original recording and again in the video for the mega-power ballad. The choir members and five chaperones also will sell Foreigner albums at the Lied before and after the show, with some of the proceeds going to the band’s Foreigner to the Grammy Foundation, which donates to schools’ music programs that have been hit with budget cuts. Wahoo High will receive $500, according to KTGL The Eagle 92.7, which sponsored the contest.

"As far as I'm concerned, music is not only the most powerful form of communication between the peoples of the world, it provides a gateway that opens up a fantastic new dimension of feeling and creativity,” Foreigner guitarist and founding member Mick Jones said in a statement. “Anything we can do to provide our young ones with the tools to express themselves through music, is our goal in this partnership."

Baker-Anderson said she was told Friday that Foreigner would be contacting her, which she said was a surreal sentence to hear, but it’s just the latest big thing in a big November for the rural school’s 25-member (plus four alternates) show choir.

“My kids just performed at the Holland and now within a week they’re on the Lied stage,” she said.

On Nov. 1, the group took the Holland Center stage in Omaha to back gospel singer Whitney Phipps. Royalty had been preparing for that show for weeks when Baker-Anderson got wind of the Foreigner contest from a singer’s parent a few days before the submission was due. (That’s when pretty much every school choir that entered heard about it -- this was short notice.)

For Baker-Anderson, a child of the '80s, “right away I could see middle school dances in my mind” when she heard Foreigner was looking for backing vocals. For her high school students, it took all of two YouTube searches for “I Want to Know What Love Is” and “Jukebox Hero” to connect the band name with a song they’d heard.

“You sing the hooks to these songs, and they’re like, ‘Oh yeah that’s Foreigner,’” she said.

She said she asked administrators for permission to take the show choir on a field trip to Warehouse Recording Studios in Omaha on Wednesday to lay down a couple takes of the chorus of the song they’d be singing onstage if chosen. She got the green light, and then they headed to Omaha. There, Baker-Anderson played piano, Wahoo band teacher Jason Smith played bass and the students sang four-part harmony without the aid of sheet music. ("I just taught it by rote and said, ‘Here’s your part,’” she said.)

They ended up running through the chorus of the song a handful of times before reviewing the tape and submitting the first take. After hearing that Royalty won, she said that plans soon got underway to print up shirts for the choir and supporters. Expect a caravan of County 6 plates coming to Lincoln the night of Foreigner's -- and Royalty's -- big show.

“I think we are probably going to have a Wahoo entourage,” Baker-Anderson said.

Tickets to Friday's Foreigner concert may be purchased at the Lied Center box office. Tickets can be purchased by calling (402) 472-4747, or click HERE to purchase online. The concert starts at 7:30 p.m.

T-shirts to support the show choir as they take the stage with Foreigner may be purchased from any school office. The cost of the t-shirts is $10. The front of the t-shirt says "Wahoo Loves FOREIGNER" and the back says "I'm with the choir!" (see design photo below)

Shirts are black with a cool edgy white lettering. Orders are due on Tuesday, Nov. 11 by 11:00 a.m., and will be available for pickup by noon on Friday. 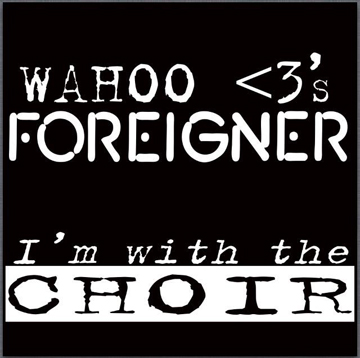