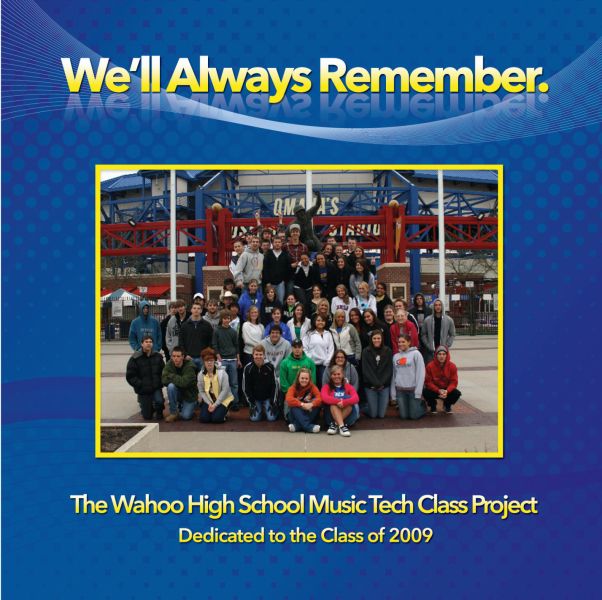 On April 29, the WHS Music Tech students traveled to BASSLINE RECORDING STUDIO in Omaha to record the original song written by the class first semester. The song was written as a dedication to the class of 2009 and also served as a memorial for classmates Nick Peters, Nathan Worley and Kyle Clark.

Students featured in the recording of the song were Taylor Murren, Chris Ludi, Kayla Coffey and Dani Shukis. Murren expressed to his fellow classmates how nervous he was before going in to record. However, once he got behind the microphone, he spit the rap lyrics like a pro. After the first take, he peeked out from behind the microphone, looked at his classmates through the glass and exclaimed, “This is fun!”

back cover of CD case 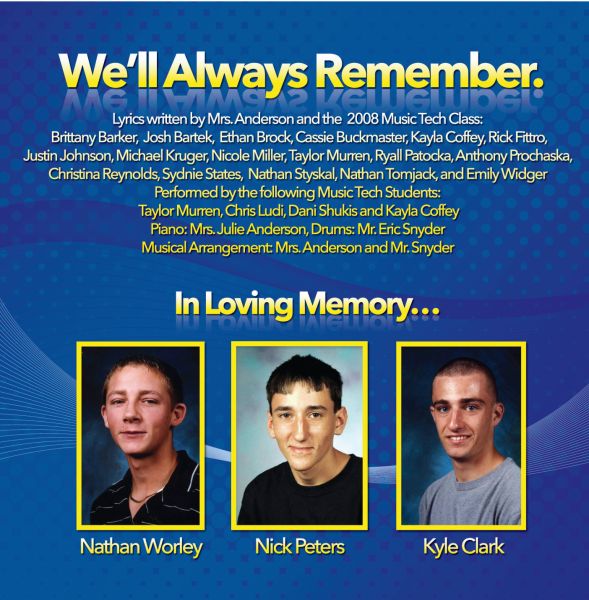 Launch the media gallery 2 player
back cover of CD case

Upon finishing his part, he said to Chris Ludi (who was also very nervous), “Dude, once you get in there, you’re not nervous at all.” Ludi then did his part behind the mic, and after a couple of takes, he got it all down. Dani Shukis and Kayla Coffey sang the chorus several times, creating the “group singing” feel to the song. Shukis then recorded the bridge on her own, and Mrs. Anderson added some background vocals to the final chorus.

When the engineer played the final product back on the speakers, there were many smiles among the students as they listened to their creation. Since then, the tune has been ringing through the halls of the school and coming out of students' car speakers.

This project gave students an opportunity to experience the creative process of writing and recording from beginning to end. They discovered that a single idea in their mind could be molded into something that is tangible and can shared with others. They also learned that the recording of a song was much more involved than what they had anticipated. However, after three hours of hard work, the students brought home a recording they were very proud of.

When the Senior Class heard the song, they liked it so much that they requested to have it played at their graduation ceremony. Copies of the CD were sold at graduation and are still available for $3 each. Proceeds from the CD will go towards paying for production costs as well as a memorial bench in memory of the friends this class lost.

If you are interested in owning a copy of the CD, you may contact the high school office or Mrs. Anderson at 443-4332.

Verse 1:
Looking back on my high school years
They were full of laughter, joy and tears
When we started out, we were all so young
Five and six years old, looking for years to come
Didn’t think it would all end so fast
But we made each day count, tried to make it last
From 96/97 to 08/09
Good times in between we were doing just fine

CHORUS:
We’ll be gone, but we’ll always remember
Walking through the halls together
Choose our path; hope it’s for the better
Wahoo High in our hearts forever
Came together, now we stand alone and
Try to make it on our own
Remember these good times in our life
Our glory days at Wahoo High

Verse 2:
Hangin’ at the COOP, that’s what we do
Dances, games and fireworks too
Spending time with friends doin’ crazy things
Preppin’ for what our future brings
Takin’ care of business at all of the games
We’re superheroes representin’ Wahoo’s name
Getting our first car and drivin’ the square
BK, Zesto’s and hangin’ at the fair

Verse 3:
Sad when we lost friends along the way
Our hearts felt the ache, but our memories stayed
We were forced to grow up ahead of our time
Hard to understand as we asked ourselves why
Though the time keeps tickin’, we gotta move on
They’ll never be forgotten even though they’re gone
Sharing the pain somehow made us stronger
Gotta live our lives right, do it in their honor

Bridge:
Never thought that the day would come
When we would walk out the door forever
But everyone has to grow up sometime
And when I look back, when I look back in time
I ‘ll remember my days at Wahoo High