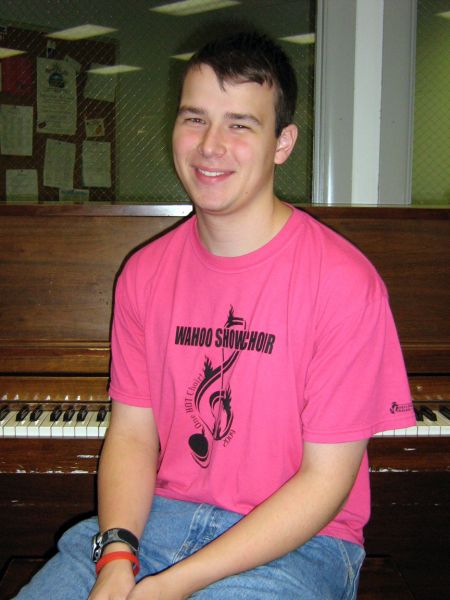 A HUGE CONGRATULATIONS goes out to WHS Senior Joseph Nabity, who was chosen for the 2009 Nebraska All-State Choir.

Making All-State choir is one of the highest accomplishments a vocal music student can attain. This is Joe's second trip to the All-State Festival. The Festival will be held in November during the Nebraska Music Educators Association Conference in Lincoln.

Most people who know Joe may not be surprised that he has attained such an honor. Music is a huge part of his life, and you see him everywhere in the music department: playing trombone in the band and jazz band, singing in the concert choir and show choir, playing piano for the high school musical and middle school show choir. He also serves as section leader, and mentors new choir and show choir members.

In his spare time, he will work with other students to help them improve their singing or work on choreography. Not only is he a consummate musician, but he also takes on other organizational roles within the music department. Currently he has been helping Mrs. Anderson organize the upcoming conference clinic, which will be hosted by Wahoo High School on November 16 this year. Last year he also helped organize a trip for students and staff to see the musical "Wicked" at the Orpheum in Omaha. You will also find him running around before each concert making sure that the show choir has their uniforms in order, and helping Mrs. Anderson with any last minute details. He also serves as student director for the Middle School Show Choir.

Joe has been a huge part of the success and growth the music department has recently seen. He has used his musical talent as well as his leadership skills to help build the vocal music program. Adding to his long list of accomplishments will be his role of representing Wahoo High School in the 2009 Nebraska All-State Choir. GREAT JOB JOE!!