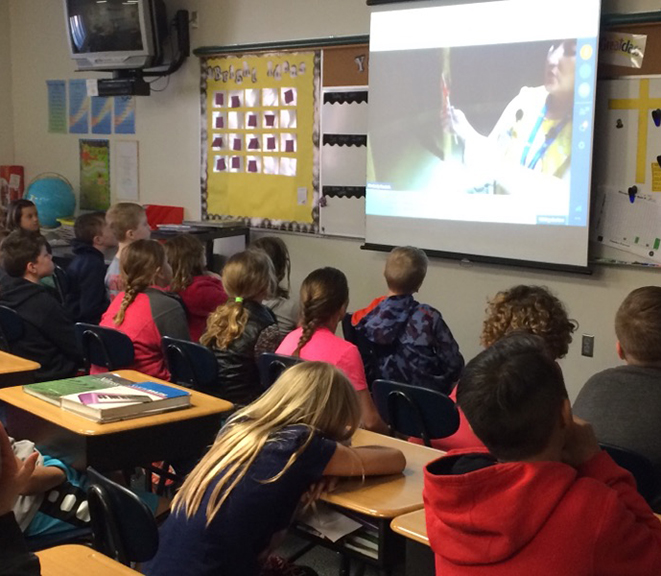 On Monday, March 6, the 4th Grade classes at Wahoo Elementary took part in a virtual field trip of the Durham Museum in Omaha, NE.  The web-based field trip lasted about 45 minutes.

The videoconference began with a discussion of “Scout” the buffalo, on display at the museum, and the many uses of the buffalo by Native Americans and pioneers. The women of the tribes used buffalo hides and furs to make clothes, moccasins, tipi covers, farming tools, and other things.

The students then were able to view a Native American earthlodge and tipi. Several of the objects that were used by the native people were on display, such as hide scrapers, dolls, rattles, etc. The earthlodge was big enough for 20 to 40 people to live and sleep in. They were cool inside when it was hot outside. When it was cold outside, the lodge was warmed by a fire in the middle of the room.

The field trip then visited the Lewis and Clark exhibit. The Louisiana Purchase cost the United States $15,000,000 and added more than 800,000 square miles to our country. President Thomas Jefferson hired Meriwether Lewis and William Clark to explore the new territory with 3 goals in mind: 1) Find a water route to the Pacific Ocean, 2) Learn about the land, nad 3) Meet the native people.

Finally, the field trip ended at a log house exhibit. The pioneer housing supplied the shelter needed to survive the harsh Nebraska weather.

The students interacted with the teacher by answering several questions. The videoconference will serve the students well as a review of Nebraska historical facts already covered, and a preview of those to come.