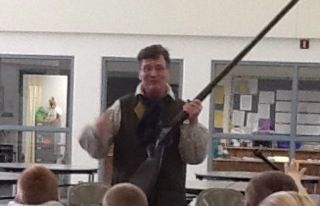 Students Experience History Beyond the Textbook

On Wednesday, February 6, Mike Dunn, the custodian, history major, and Revolutionary War re-enactor, spoke in character to the 5th graders about being a 58-year-old man in the militia during the Revolutionary War.

Dunn explained that he felt like he was getting too old to be in another war. He was able to bring the war to life as he was called up to be part of the militia again.

Dunn talked about how being in the war was less about fighting and more about hard work. The students were able to see such things as a flint musket and a musket ball, revolutionary attire, and a wool jacket weighing at least 40 pounds.

Dunn puts many of his own uniforms together, although he won't admit that he is handy with a sewing machine. Mr. Dunn explained to the fifth grade about his work with the Hastings Museum and his passion for American History, especially Colonial Times.