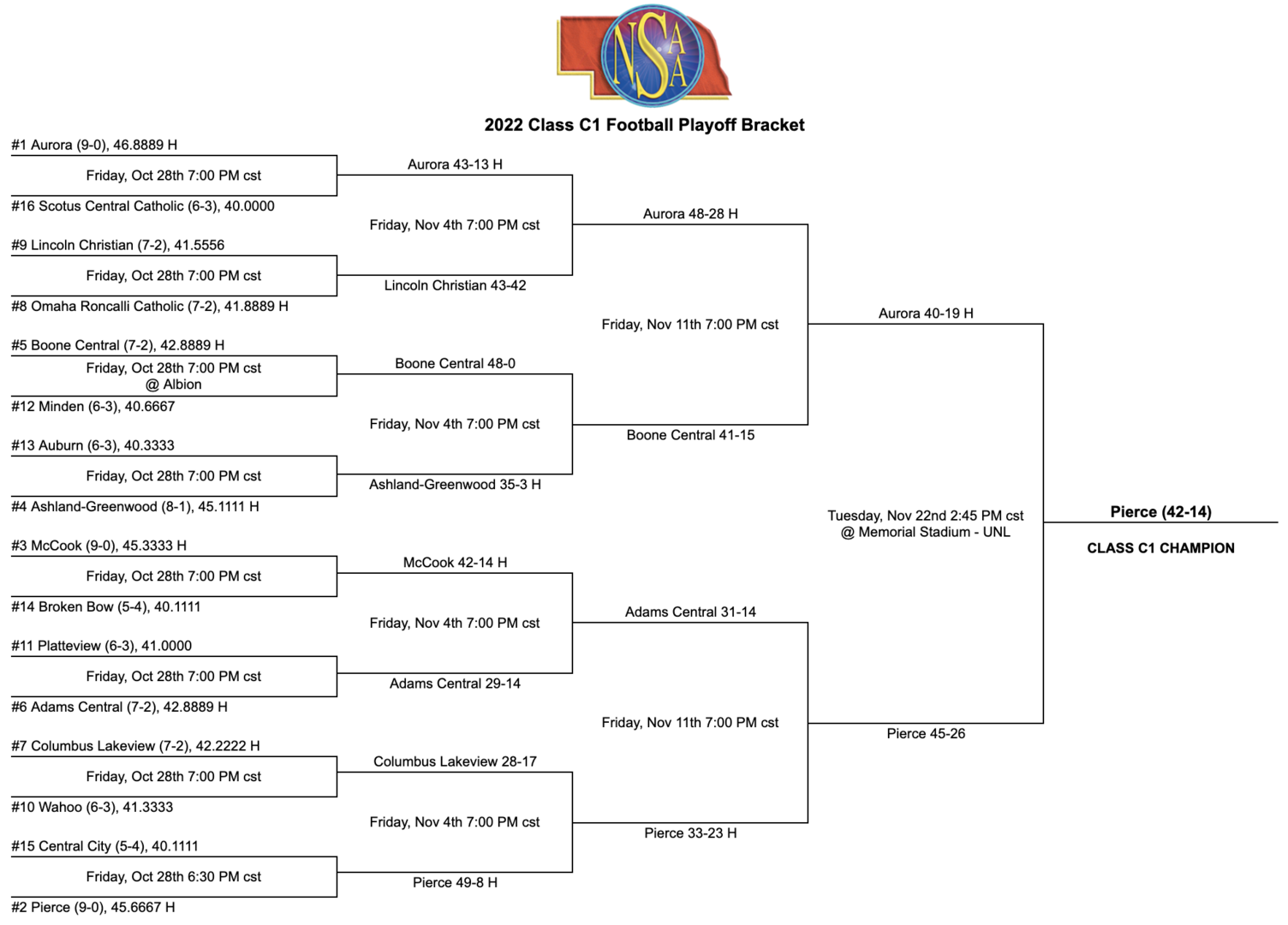 Wahoo lost in the first round of the 2022 Football Playoffs to Columbus Lakeview, 17-28.

On defense, Wahoo was led by Jacob Andresen with 13 tackles and Dominek Rohleder with 11 tackles. Zach Fox had 10 tackles and William Nielson had 8 tackles.

Wahoo finishes the year with a 6-4 record.

Wahoo won its final regular season game of the 2022 season in convincing fashion by beating the Schuyler Warriors 68-0.

On defense, Wahoo held Schuyler to 68 total yards of offense. Iversen had 8 tackles, Dominek Rohleder had 6 tackles, and William Nielson and Hancock each had 4 tackles. Isaac Baker and Graham Nutzman each had a fumble recovery.

Wahoo will travel to Columbus Lakeview for a rematch in the 1st round of the C-1 Playoffs on  Friday, October 28.

Wahoo won its fifth game of the season behind a solid defensive performance, getting their second shutout of the season.

Offensively, the Warriors were led by Owen Hancock who rushed for 121 yards and 2 touchdowns. Hancock was 7 for 15 passing for 62 yards. Noah Bordosvky had 48 yards rushing on 9 carries and 1 touchdown, Sam Edmonds had 12 carries for 58 yards. Sam Edmonds also had 41 yards receiving with 4 catches.

On defense, Wahoo held the Falcons to 150 yards of total offense. At linebacker Caden Smart had 9 tackles and Braylon Iversen had 8 tackles. Dominek Rohleder had 7 tackles and 2 tackles for loss. Zach Fox and S. Edmonds both had 6 tackles for the game. Jacob Andresen and Eli Emerson both had 6 tackles, as well. Hancock had the lone interception of the evening to keep the Falcons from scoring.

Wahoo will host Schuyler for Senior Night next Friday, October 21.

Wahoo gritted out another district win on Friday by scoring 28 unanswered points in the 2nd half versus Top 10 Columbus Scotus.

On Defense, Wahoo controlled the line of scrimmage and held the Shamrocks to 156 yards of total offense. Dominek Rohleder had 9 tackles and Jacob Andresen had 8 tackles and 1 tackle for loss. Jake Scanlon had 7 tackles with 3 tackles for loss and 2 sacks. Braylon Iversen had 8 tackles and a fumble recovery. J. Edmonds and Hancock each had an interception.

Wahoo will travel to D.C. West for a another very significant District game next Friday, October 13.

Wahoo burst out to an early lead on Friday night and never looked back as they defeated the Arlington Eagles 61-7.

Wahoo will travel to Columbus Scotus for a very important District game next Friday, October 6.

Wahoo suffered its third loss of the 2022 season on Friday, falling to the Columbus Lakeview Vikings in a defensive battle.

Offensively, the Warriors were led by Trevor Ehrlich on the ground with 22 rushes for 95 yards. Owen Hancock was 7-14 passing for 64 yards and 2 interceptions. William Nielson had 1 catch for 29 yards and Zach Fox had 2 catches for 19 yards.

Wahoo will play Arlington next week on Friday at 7:00 p.m.

The Warrior defense had another exceptional night by holding the Pioneers scoreless and holding their offense to 68 yards of total offense.

On offense the Warriors were led by Trevor Ehrlich with 19 carries for 161 yards and 3 touchdowns. Josh Edmonds led all receivers with 3 catches for 17 yards. Owen Hancock led all passers going 8/12 for 44 yards.

Defensively Wahoo was led by Dominek Rohleder with 3 sacks, 1 tackle for loss, and a caused fumble. Sam Edmonds had 1 interception and Caden Smart with William Nielson each had a fumble recovery.

Next Friday Wahoo will travel to Columbus Lakeview, as they begin District play taking on the 2021 State Champions at 7:00 p.m. 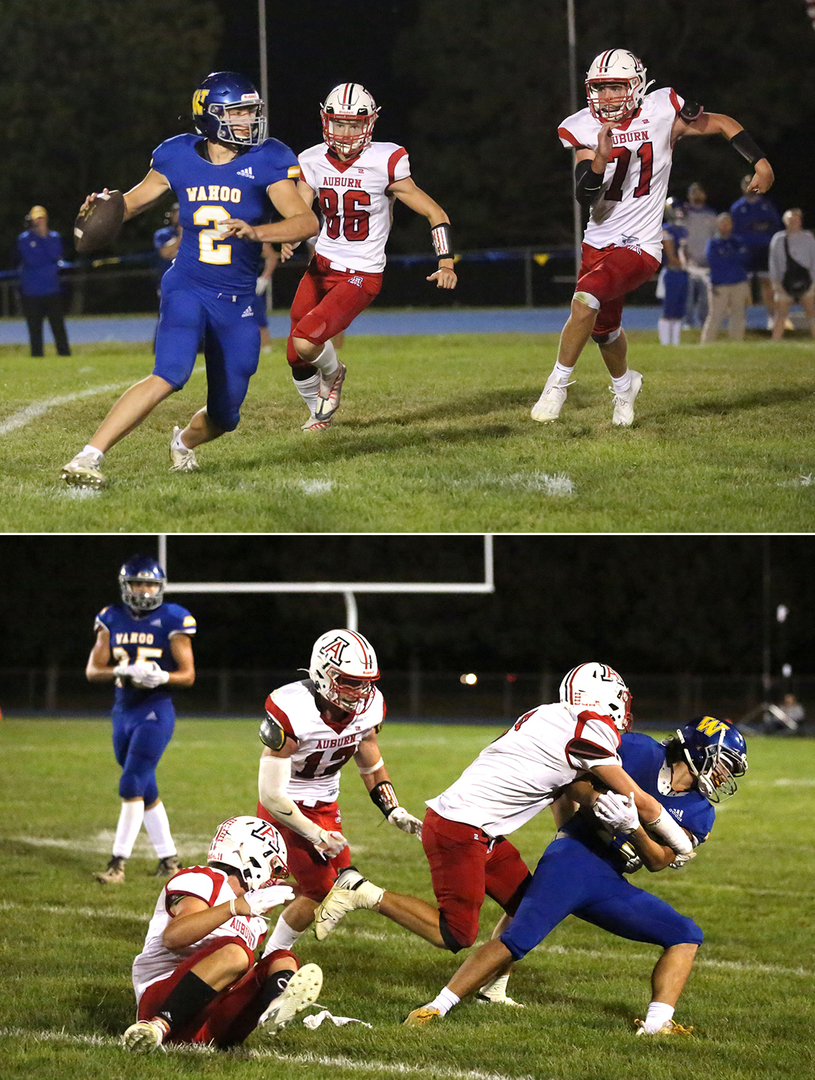 The Warrior defense dominated most of the night on Friday, allowing Auburn only 69 yards of offense. Wahoo earned its first victory of the 2022 season and won its Homecoming game.

Offensively, Trevor Ehrlich led the Warriors on the ground with 105 yards rushing on 18 carries and 1 touchdown. Receiver Zack Fox had 4 catches for 67 yards and 1 touchdown. Owen Hancock was 12 for 21 passing for 126 yards, 2 touchdown passes, and 2 interceptions on the evening.

On special teams, the return games really shined with Fox having 3 punt returns for 98 total yards, including a 58-yard return to set up the second touchdown by the Warriors. 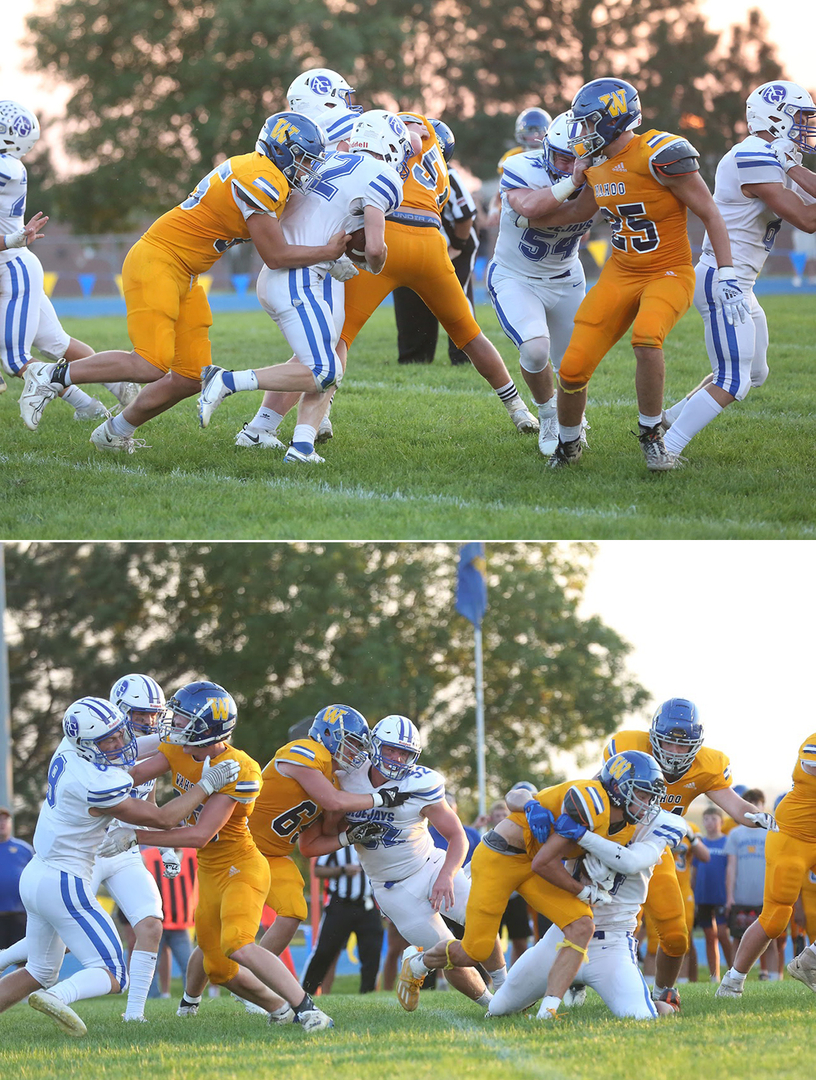 Wahoo struggled again on the football field Friday night as they lost their second straight game of the 2022 season.

Offensively, Trevor Ehrlich led the Warriors on the ground with 29 yards rushing on 14 carries. Receiver Zack Fox had 5 catches for 62 yards.

Defensively, William Nielson led all tacklers with 10 tackles, 3 tackles for loss, and a couple of caused fumbles. Dominek Rohleder had 9 tackles, 1 sack, and 1 tackle for loss. Eli Emerson had 8 tackles.

Wahoo will play Auburn next Friday for their Homecoming Game at 7:00 p.m.

Wahoo opened the 2022 season with a loss to Pierce. The Warriors struggled in all phases of the game and were overmatched by Pierce’s size.

The Warrior Defense was led by Fox with 9 tackles (3 solos and 6 assisted) and Nielson with 3 solos and 5 assisted tackles. Ehrlich and Jake Scanlon both had 7 tackles each. Jacob Andresen and Dominek Rohleder both had 6 tackles each from their defensive line spots. Smart added 6 tackles and Edmonds had 5 tackles.

Wahoo will welcome the Ashland-Greenwood Bluejays to town next Friday. 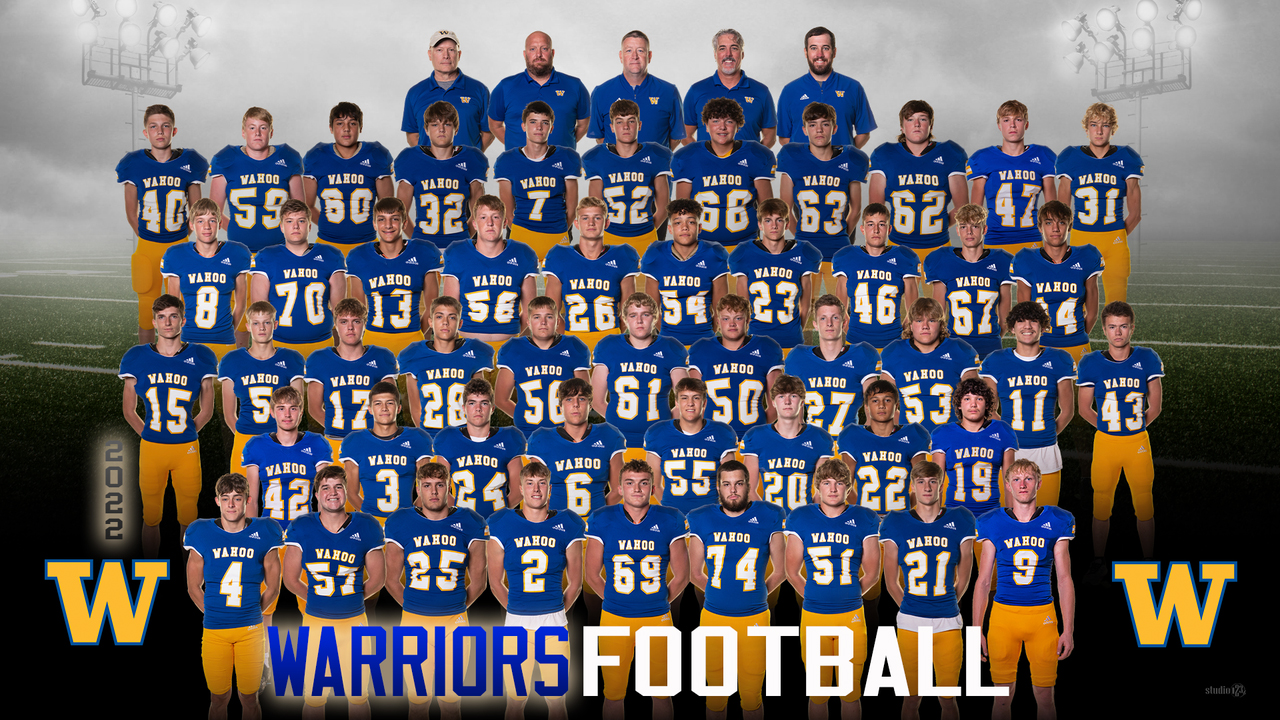 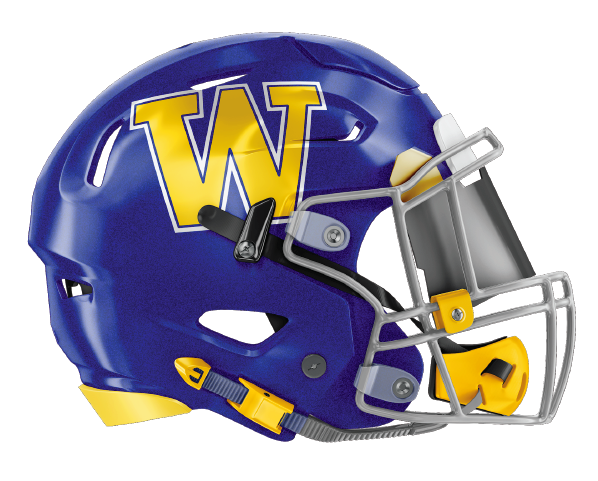 WAHOO- The 2022 Wahoo Football Team will look much different from one a year ago, when they went 7-4 overall and reached the quarterfinals of the Class C-1 State Football Playoffs. A big graduating class and then a small senior class . . . 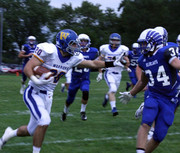 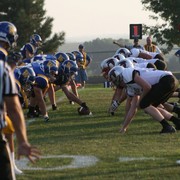 Last year Wahoo High School made it to the Nebraska Class C-1 semifinal for the second time in school history, and this year they hope they can make the next jump into the championship game. “We definitely have the players to make a . . .

Warriors Wrap Up 2011 with Respectable 9-3 Record

JV Warriors Post Another Home Shut Out over Raymond Central

Wahoo    52 Bishop Neumann    12 Photos: Click HERE to view photos of the game. The Wahoo JV football team played their final game of the 2010 season against Bishop Neumann at Wahoo . . .

Wahoo 9th/10th FB vs Ashland Wahoo    24 Ashland    0 Highlights: The Warriors faced off with Ashland for the final time in a three game series, this time at Wahoo High School. The . . .

The Wahoo freshmen and sophomore football team capped off their perfect 4-0 season with a 42-8 victory over the Seward Bluejays on October 27 at Seward High School.  Although outmanned, with only 17 Warriors making the trip . . .

Please click the following link to view photo highlights of the 2008 JV Season:   2008 JV Football Highlights In football, the quote “defense wins championships” is most often used to describe how the truly dominant teams . . .

Monday Morning Lights, anyone? They burned brightly in the wee hours at Wahoo High School for the first high school football practice of the season in the state. Midnight Madness at Wahoo? And not for basketball? That's the sport . . .