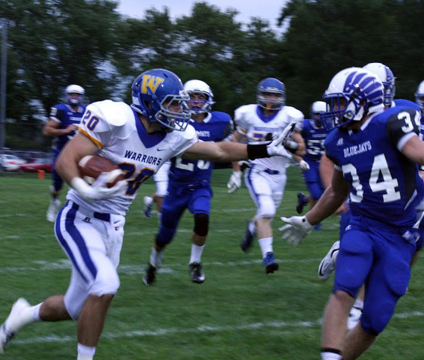 STATE PLAYOFFS:
2015 State Playoffs were played October 30-November 24. Wahoo earned the #6 seed in Class C1, and hosted #11 Holdrege in the first round of playoffs on Friday, Oct. 30 at 7:00 p.m. The Dusters defeated the Warriors, ending Wahoo's season with a 7-3 record. Click HERE to view the entire C1 playoff bracket.

The Wahoo Warrior football team got back to its winning ways on Friday night by defeating the North Bend Tigers 54-14.

The Warriors dominated the game by getting out to a quick start, leading the first quarter 14-0 and finishing the second quarter with a scoring frenzy of three touchdowns in the final two minutes of the first half.

Offensively, Wahoo was led by Ethan Stratman on the ground, with 17 carries for 135 yards and 4 rushing touchdowns. Jordan Ptacek added 41 yards on 6 carries, and Josh Abbott had 40 yards on 3 carries and 1 touchdown. Ptacek led all receivers with 3 catches for 58 yards and 1 touchdown.

The Warriors qualified for the C-1 playoffs as a #6 seed, and will host the #11 seed Holdrege on next Friday.

The Wahoo football team suffered a disappointing loss to Bishop Neumann on Friday night. Poor execution on offense and penalties kept the Warriors from finishing drives.

Wahoo drove the field on their first drive and settled for a 25-yard field goal by Blake Kaiser. Wahoo managed to get into the red zone three other times, but was turned away by the Cavalier defense each time.

On offense Wahoo was lead by senior Ethan Stratman, who had 52 yards on 14 carries, and junior Jake Ruzicka with 6 receptions for 69 yards. Josh Abbott was 9 for 17 for 94 yards on the evening.

Junior Ryan Walker, who had 10 tackles, led the Warriors and 1 tackle for a loss, and Stratman had 7 tackles and 1 sack on the evening.  Sam Lindgren also had 6 tackles and 2 tackles for loss in the game.

Wahoo will finish their regular season playing at North Bend next Friday night.

The Warrior football team pulled off another huge upset on Friday night, knocking off the Columbus Scotus Shamrocks, a District C1-4 opponent.

Wahoo fell behind in the second half 14-0, but managed to get a huge score as time expired in the 1st half when Josh Abbott connected with Seth Anderson for a 34-yard touchdown pass to cut the lead going into half time.

On the opening kick-off of the second half, the Warriors capitalized on a Scotus turnover when Blake Kaiser kicked a 36-yard field goal to cut the lead to 10-14. Wahoo and Columbus Scotus traded scores in the 3rd quarter to make it 24-27 going into the 4th. The only score in the 4th quarter was when Jordan Ptacek made an unbelievable 31-yard catch in the end zone to put the Warriors up 31-27.

Offensively, Wahoo was lead by senior Ethan Stratman, who had 23 carries for 137 yards. The offense did not have a great night statistically, but having 0 turnovers and some crucial 4th down conversions really assisted the Warriors in the hard-fought game.

Senior Humberto Villarreal had an outstanding game on defense, logging 11 tackles and a game-saving interception late in the 4th quarter. Ryan Walker had 10 tackles on the evening, and Dylan Egr had 7 tackles and a fumble recovery.

The difference in the game was the Special Teams play of the Warriors. Sophomore Dylan Egr had a game-changing 94-yard kick-off return for a touchdown late in the 3rd quarter to keep Warriors in the game. Wahoo’s return game netted 161 yards to Scotus’ 56 yards. The field position difference proved to be critical in Wahoo’s victory.

Wahoo will travel across town to Bishop Neumann on next Friday for another C1-4 district battle that will determine the District Champion.

Wahoo scored early and often in their game on Friday night against the David City Scouts. Wahoo scored 28 point in the first quarter and never looked back.

The Warriors had their best defensive performance of the season. Wahoo held David City to 168 yards of total offense and forced 3 turnovers. Freshman Sam Kolterman, who registered 9 tackles, 1 tackle for loss and a caused fumble, led the defensive unit. Junior Nate Spicka had 6 tackles, 1 tackle for loss, and 1 sack, and Seth Anderson had 2 tackles and an interception.

The Wahoo Warrior football team achieved their 4th win of the 2015 season with a hard fought victory over Columbus Lakeview on Sept. 25.

It was the tale of two halves on Friday night as the Warriors took a 14-0 lead into halftime. In the second half, Wahoo managed to hang on as Lakeview scored 13 points and missed the PAT on their second score, to give the Warriors the 1-point lead it would need to win the game.

Offensively, Wahoo was led by senior Jordan Ptacek, who had 14 carries for 79 yards. Ptacek also added 3 receptions for 23 yards. Jake Ruzicka led all receivers with 6 catches for 87 yards and 1 touchdown reception. Josh Abbott was 11-16 passing for 150 yards and 2 touchdowns.

Defensively, the Warriors were led by sophomore Dylan Egr, who had 13 tackles, and senior Humberto Villarreal with 11 tackles and 2 interceptions. Ruzicka had 9 tackles and 2 tackles for a loss, and Ptacek had 8 tackles with 1 of those for a loss, as well.

The Warriors will travel to David City next week to take on the Scouts (1-3).

The Warrior Football team traveled to Syracuse on Friday night to take on the Rockets.

Wahoo scored first when freshman Sam Kolterman blocked a Syracuse punt early in the first quarter, and the ball rolled out of the back of the endzone for a safety. Wahoo then added a 38-yard field goal from junior Blake Kaiser to go up 5-0 in the 1st quarter.

Syracuse answered with a long TD run to take the lead 5-7. On the very next Warrior drive, Josh Abbott connected with Jake Ruzicka on a 44-yard TD pass. Jordan Ptacek made a catch for the two-point conversion and the score was 13-7 at the end of the 1st quarter.

Wahoo outscored the Rockets 17-3 in the 2nd to take control of the game.

Offensively, the Warriors had a pretty balanced attack and were led by several different players. Ethan Stratman had 18 carries for 81 yards and added 1 catch for 12 yards. Ptacek had 10 carries for 32 yards and 5 receptions for 52 yards, 1 TD reception. Ruzicka led all receivers with 74 yards on 4 catches and 1 TD. Abbott was 14-20 passing for 159 yards and 2 TD catches. Abbott also had 8 carries for 26 yards and 1 rushing TD.

On Special Teams the Warriors dominated the Rockets with big kick-off returns and smothering kick-off coverage. Dylan Egr had a punt return for 32 yards, as well as a 48-yard kick-off return. Stratman had 2 kick returns for 68 yards. Wahoo started most of their drives at or very near mid-field, while Syracuse was pushed back deep in their own territory to start most of their drives.

Next week, Wahoo will take on Columbus Lakeview (2-2), a team that is coming off a two-game winning streak of their own.

Wahoo picked up their 2nd win of the 2015 season on Homecoming Night against the West Point-Beemer Cadets.

The Warriors scored first when Josh Abbott connected with Jake Ruzicka with 4:42 left in the 1st quarter, and they never looked back.

Wahoo took a 21-0 lead into half time. West Point came out after half time and scored their only touchdown after a long five-minute 80+ yard drive; however, Wahoo answered with a quick score of their own, and scored two more times in the fourth to seal game.

The Warrior defense was lead by Ryan Walker, who registered 12 tackles, Nathan Spicka, who had 8 tackles, and Dylan Egr had 8 tackles and 1 tackle for loss. Jordan Ptacek also had a great night on the defensive side of the ball with 9 tackles and 1 interception.

On special teams Blake Kaiser did another great job kicking, going 5/5 for PAT’s and making a 32-yard field goal. Kaiser was also instrumental in the Warrior Kick-Off coverage team, pinning the Cadets inside the 25-yard line 3 different times.

The Warriors will travel to Syracuse on 9/18 for an old Capitol Conference match-up.

Wahoo took on the #1-ranked Norfolk Catholic Knights on Friday night. The Warriors struggled on offense most of the evening as they gained 124 yards of rushing. Jordan Ptacek led the rushing attack with 43 yards. Jake Ruzicka led all receivers with 3 catches for 29 yards, and Josh Abbott was 9-21 for 70 yards, and had 3 interceptions.

The Warriors will take on West Point-Beemer next week for the 2015 Homecoming Game.

The 2015 Wahoo Warrior Football team had a tough task ahead of them on Friday night as they headed down to Ashland to take on the #1 ranked Bluejays.

The victory was highlighted with many individual efforts that enabled the team to show some unbelievable mental toughness as they battled for 4-plus quarters of football. 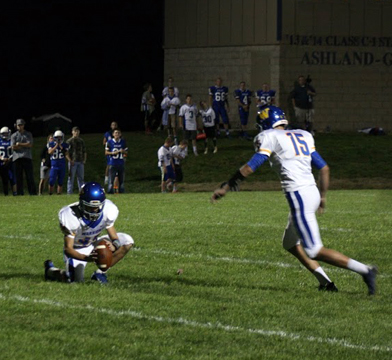 Launch the media gallery 2 player
The Warriors jumped out to a 6-0 lead early in the game when Ethan Stratman scored on a pass from Josh Abbott. Wahoo lead much of the game and even had a 33-20 lead early in the 4th quarter, but the top-ranked Bluejays would not go away and pulled to a 42-39 lead with 1:38 left in the game.

Wahoo didn’t hesitate as they moved the ball down the field and Blake Kaiser kicked a 29-yard field goal with :07 seconds left to tie the game and put the game into overtime. 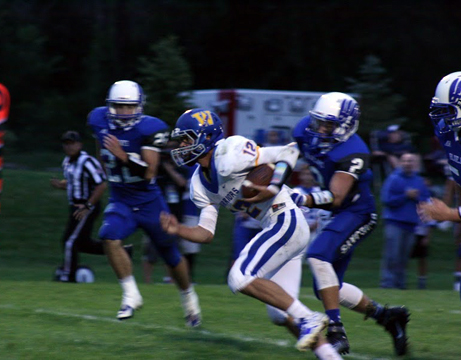 In overtime the Warriors were on offense first, and Kaiser added his fourth field goal from 27 yards, putting the score at 45-42. With that kick, Kaiser tied a C-1 State Record with 4 field goals in a game!

The Warrior Defense stood tall in OT and forced Ashland-Greenwood to kick a field goal on fourth down, as well; however the Bluejays’ field goal hit the left upright and missed, giving Wahoo its first victory of the 2015 season.

Abbott finished with 87 yards rushing and 214 yards passing, with 3 passing TD’s and 1 rushing TD. Stratman had 71 yards rushing. Jake Ruzicka lead all receivers with 2 catches for 104 yards and 1 TD catch. Brendan Lacey added a TD catch for 24 yards and Seth Anderson had a 36-yard catch late in the 4th quarter to set up the field goal to tie the game.

Wahoo’s special teams were highlighted with Dylan Egr’s 82-yard kick-off return for a touchdown in the 3rd quarter. On defense the Warriors were led by a total team effort. Jordan Ptacek had 10 tackles, Nathan and Bobby Spicka each had 7 tackles apiece. Stratman and Ryan Walker also had 7 tackles. Cole Krecklow in the defensive line had 4 tackles, 1 sack and 2 fumble recoveries in an outstanding defensive effort.

The Wahoo Warrior Football team will play the new #1-ranked Norfolk Catholic Knights on September 4 for their home opener. 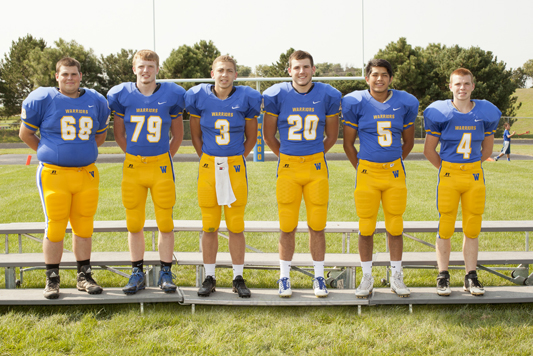