Wahoo senior Gage Lamprecht goes vertical for a touchdown catch against Bishop Neumann on Oct. 21. The Warriors defeated the #1-ranked Cavaliers 21-0, captured the District C1-4 Championship, and head to playoffs with an 8-1 record.
Launch the media gallery 1 player

Wahoo senior Gage Lamprecht goes vertical for a touchdown catch against Bishop Neumann on Oct. 21. The Warriors defeated the #1-ranked Cavaliers 21-0, captured the District C1-4 Championship, and head to playoffs with an 8-1 record.

PLAYOFFS
The first round of the 2016 Class C1 NSAA Football Playoffs began Friday, Oct. 28. The Wahoo Warriors entered playoffs with an 8-1 record, and were named the 4th seed. Wahoo defeated #13 Gothenburg Swedes 36-14 on Oct. 28, and advanced to the quarterfinals, where they will were knocked out by #5 Kearney Catholic Stars 25-41. The Warriors finish their 2016 season with a 9-2 record. Click HERE to view the entire C1 playoff bracket. GO WARRIORS!

Wahoo suffered a devastating loss on Friday night at the hands of the #5 seeded Kearney Catholic Stars.

Kearney Catholic used a spread passing attack and an aggressive defense to give the Warriors their second loss of the season.

Wahoo struggled offensively most of the evening. Dylan Egr led the Warriors with 23 carries for 63 yards and Jake Ruzicka had 5 receptions for 86 yards and 2 touchdowns. Cameron Quick came in for an injured Josh Abbott and threw for 9 completions for 17 attempts and 3 touchdowns.

Defensively, Ryan Walker, who had 17 tackles, 1 TFL and 1 fumble recovery, led Wahoo. Nathan Spicka and Egr each had 9 tackles, and Ruzicka had 8 tackles for the game.

Wahoo was eliminated from the 2016 NSAA Playoffs with this quarterfinal loss, and finished the year 9-2.

Wahoo won their first-round playoff game on Friday night by pulling away in the 2nd half.

Going into halftime the Warriors held a narrow 17-14 lead, but widened that margin very quickly with 19 unanswered points.

Offensively, Dylan Egr, who had 26 carries for 206 yards and 3 rushing touchdowns, led the Warriors. Jake Ruzicka had 3 catches for 96 yards and 1 touchdown. Cameron Quick was 7 for 13 passing for 140 yards and 1 TD pass.

Wahoo will host the Kearney Catholic Stars for a quarterfinal match-up in the C-1 State Playoffs on Friday night, Nov. 4. Kickoff will be at 6 p.m. 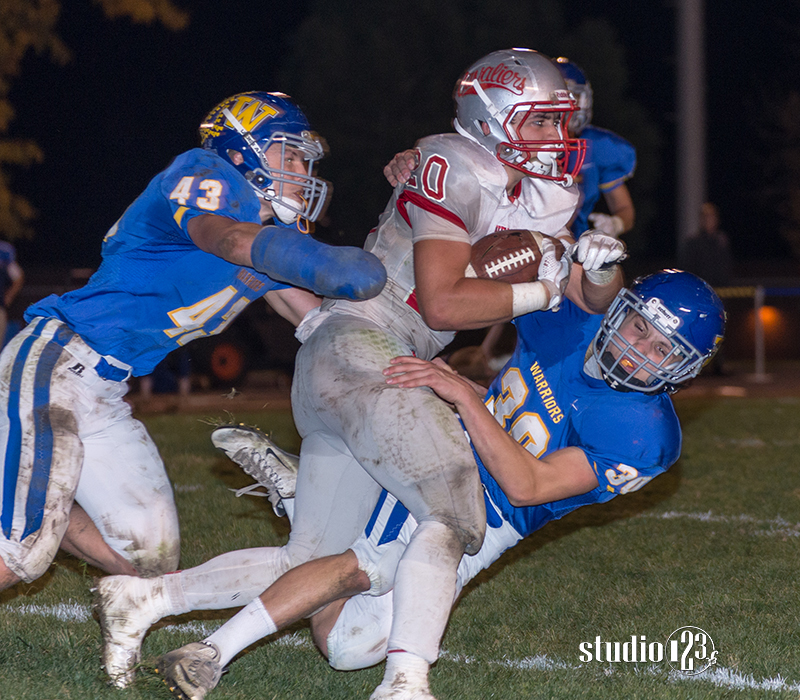 Wahoo captured the District C1-4 Championship on Friday night with a convincing win over Bishop Neumann.

Wahoo capitalized on two Cavalier turnovers to score 14 of their 21 points.

The Warrior Defense played very well on the evening, holding the Cavaliers to zero points for the first time this season. Ryan Walker led Wahoo with 18 tackles, 2 tackles for loss, 2 sacks, 1 fumble recovery and 2 caused fumbles. Sam Kolterman chipped in 9 tackles 2 tackles for loss and 2 sacks. Nathan Spicka also had 8 tackles and 1 caused fumble. Josh Abbott had a fumble recovery and a 25-yard return for the final touchdown in the 3rd quarter.

Offensively, Dylan Egr led all rushers with 53 yards and 1 rushing TD, as well as 24 yards receiving on 2 catches. Jake Ruzicka had 4 receptions for 50 yards, and Gage Lamprecht had 2 catches for 16 yards and 1 TD reception. Abbott threw the ball really well, going 9-15 for 97 yards and 1 TD pass.

Wahoo will host Gothenburg for the first round of the C-1 playoffs on next Friday. Kick-off is set for 6:00 p.m.

The Wahoo Warrior Football team experienced their first loss of the 2016 season in a hard-fought game versus #3-ranked David City Aquinas.

The Warriors found it tough to overcome the turnovers in the second half.

Offensively, Wahoo had a difficult time scoring with the big plays they had in the previous games. Dylan Egr led the rushing attack with 11 carries for 60 yards, and Jake Ruzicka led all receivers with 3 catches for 86 yards. Josh Abbott finished with 6 completions with 17 attempts for 115 yards and 2 interceptions.

It doesn’t get any easier for the Warriors as they welcome the top-ranked Bishop Neumann Cavaliers on Friday, October 21.

Wahoo continued their winning ways on Friday with a 62-21 victory over Nebraska Capitol Conference foe Syracuse.

Wahoo got to a 14-0 lead early in the 2nd quarter, only to watch it vanish to a 1-point lead with 4 minutes left in the half. Then Wahoo had 48 unanswered points to open the lead to 62-14. Syracuse managed to score at the very end of the 4th quarter to make it 62-21.

Wahoo will travel to #3 David City Aquinas next Friday night. 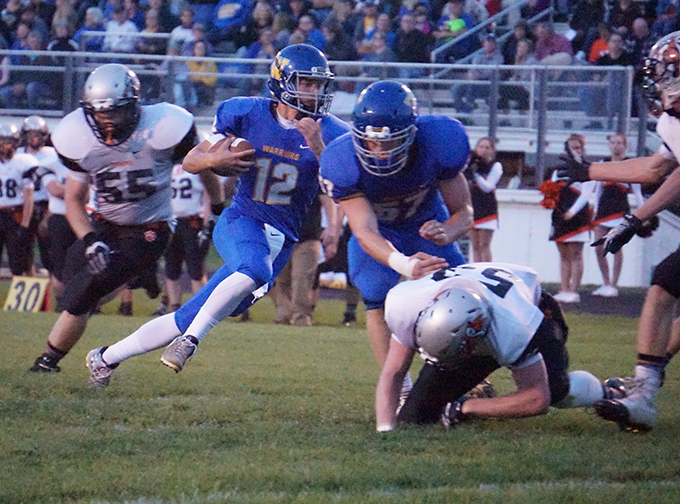 Warrior senior quarterback Josh Abbott heads toward 1 of 3 touchdowns he made in the Oct. 7 Homecoming game against North Bend Central.
Abbott led Wahoo to a 60-0 shutout over the Tigers.

The Wahoo Warrior Football team was off to another fast start on Friday night, as they dominated the North Bend Tigers for their 2016 Homecoming Game.

Wahoo scored early and often as they put up 34 points in the first quarter. The Warrior defense held the Tigers to just 92 yards of total defense. Ryan Walker and Billy Hancock led the Warrior defense with 7 tackles for each of them. Sam Lindgren and Jack Sutton were difficult to block all night as they each had 3 tackles for loss. Dylan Egr and Zane Bennett each had an interception on the evening.

The Warrior punt block/return unit had a very productive evening as Dylan Egr had 131 yards on 3 returns and 2 of those for touchdowns, and Corby Brigham had 3 returns for 69 yards.

Josh Abbott led the offensive unit with 3 rushing TD’s on 80 yards, and going 9-12 for 100 yards and 1 passing TD. Dylan Egr and Trevin Luben each had 40 yards rushing.

Wahoo will welcome the Syracuse Rockets (3-3) to town on next Friday night. 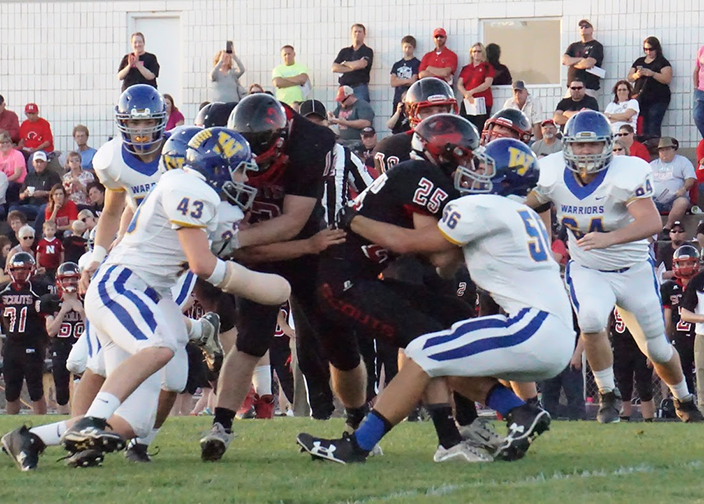 Wahoo’s defense and special teams dominated early in the game to get the Warriors off to a quick start.

The kick-off team was able to pin the Scouts deep for most of the game, and the punt block team spent a fair amount of time in David City’s backfield. Wahoo managed to block or tackle the punter on 3 of 4 punts in the first quarter. This allowed the Warriors to build a 28-point first quarter lead.

Ryan Walker played a tremendous game on defense, getting in on 18 tackles, and led Wahoo’s defense with 1 tackle for loss and 1 pass deflection. Nathan Spicka had 7 tackles with 3 tackles for loss, and Sam Kolterman had 6 tackles, with a fumble recovery. The defense and special teams units were able to force 5 turnovers for the game.

Wahoo will welcome the 3-1 North Bend Tigers to town next Friday for their 2016 Homecoming Game. 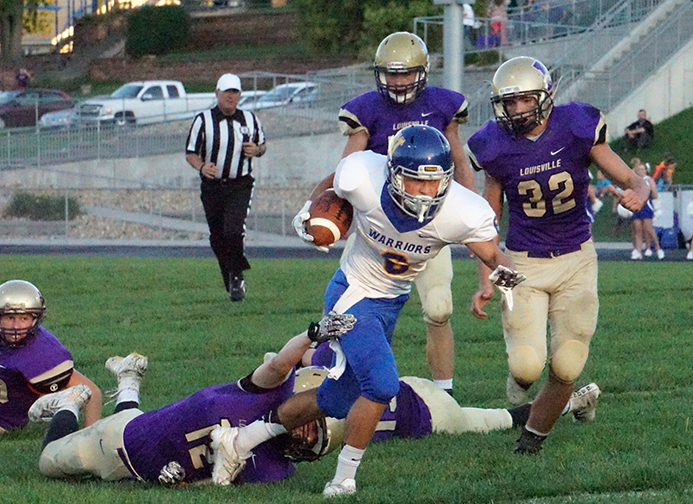 The Warrior Football team moved to 4-0 after Friday’s lopsided win over Louisville.

Wahoo jumped out to a 23-0 halftime lead, and then scored another 21 points in the 3rd quarter.

On defense the Warriors held Louisville in check all night long, only giving up 141 yards of total offense. Sam Lindgren, who anchored the defensive line, led the defense. Lindgren had 5 tackles on the night. Tucker Hancock, Will Shanahan, and Gage Lamprecht all had sacks on the night, as well.

Wahoo also had contributions from the Special Teams units, as Egr had a 74-yard kick-off return for a touchdown to open the second half. The very next series, Ruzicka blocked the punt and Ryan Walker recovered the ball in the end zone for another score.

Wahoo will travel to David City next week to play the 0-4 Scouts. 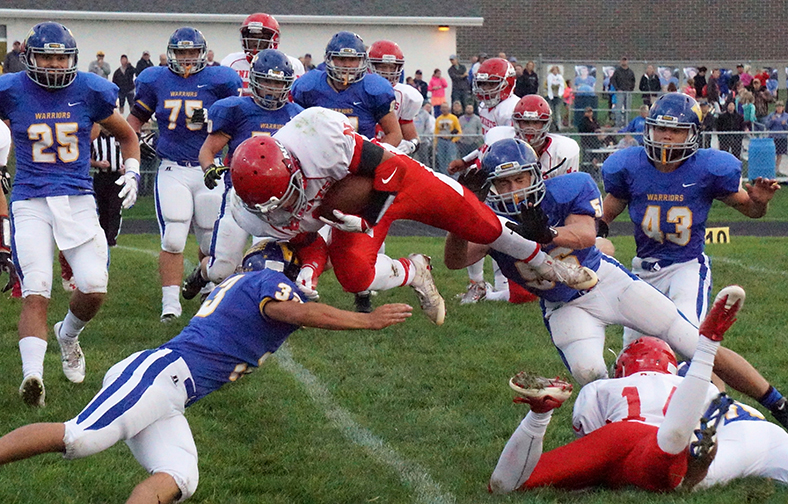 The Warrior Defense had an incredible performance against ranked Norfolk Catholic on Sept. 9, allowing only one yard of total offense in the 2nd half! Wahoo eked out the 23-22 win over the Knights with a TD pass to Jake Ruzicka in the end zone in the final seconds of the game. (photo courtesy Joan Lindgren)
--------------------

The Wahoo Warriors won their third game of the 2016 season in an exciting game versus highly ranked Norfolk Catholic.

Wahoo took its first lead of the game with 5:33 left in the 4th quarter, only to watch that lead vanish with a 99-yard kick return by Dylan Kautz. Wahoo kept battling and scored on their final drive as Josh Abbott found Jake Ruzicka in the back of the endzone with 26.6 seconds left in the game.

The Warrior Defense played an unbelievable game and dominated the line of scrimmage. The Warriors held Norfolk Catholic to 40 yards rushing, forcing them to rely on their passing game. Ryan Walker led Wahoo with 14 tackles, 1 tackle for a loss, and 1 sack. Nate Spicka added 12 tackles and Sam Kolterman added 10 tackles. The Defensive unit took over in the 2nd half as they allowed only 1 yard total offense in the second half.

On offense Wahoo was led by Dylan Egr, Abbott and Ruzicka. Egr led all rushers with 22 carries for 178 yards. Abbott had 33 yards rushing and 80 yards passing.  Ruzicka had 7 catches for 80 yards and 1 TD. The Warrior Offensive Line was able to take control of the line of scrimmage as Wahoo outrushed Norfolk Catholic 250 yards to 40 yards on the evening.

Wahoo will travel to Louisville next week to take on the 0-3 Lions. 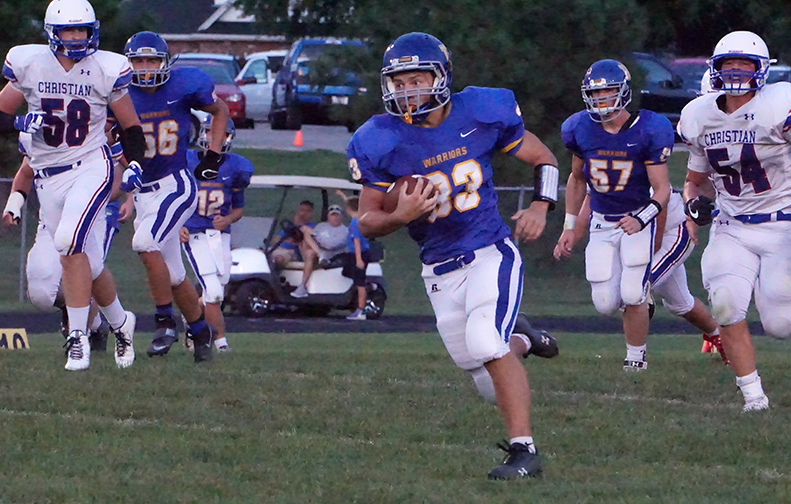 Warrior senior Caleb McGill runs for one of two touchdown's in the Sept. 2 game against Lincoln Christian! The Warriors crushed the Crusaders at home, 40-0. (photo courtesy Joan Lindgren)
--------------------

In their 2016 home opener on Friday night, the Wahoo Warriors got off to a quick start and never looked back. Wahoo scored 3 times in the 1st quarter to open up a 21-0 lead in the game.

Wahoo’s Defense had another dominant performance, shutting out the Crusaders from Lincoln Christian. Nathan Spicka led all defensive players with 10 tackles and 2 tackles for losses. Other notable defensive efforts: Ryan Walker had 9 tackles, 2 for losses, Gage Lamprecht had 6 tackles, and Billy Hancock had 5 tackles, 1 tackle for a loss and 1 interception.

The Warriors will have a tough challenge next week as they host the top-ranked Norfolk Catholic Knights. 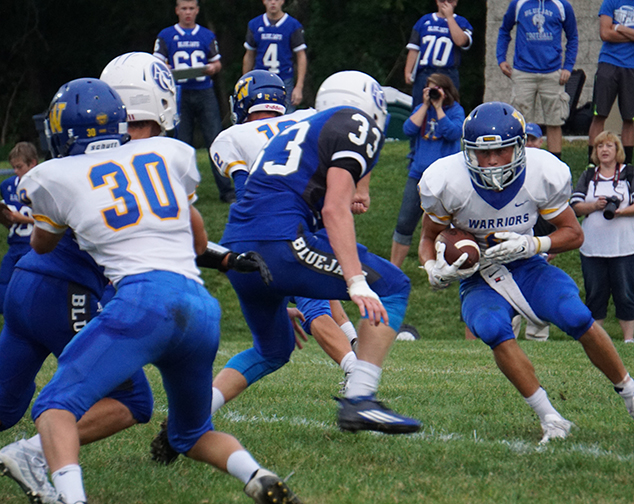 The Warriors had a little slow start for their first game in 2016, and then scored 23 unanswered points in the 2nd quarter to pull away in the first victory of the 2016 season.

The offense was unable to sustain any drives to score on the evening, but instead relied on big plays from their backfield. Dylan Egr led all rushers in the game, scoring 2 rushing touchdowns with 16 carries for 128 yards, averaging 8 yards a rush for the game. Zane Bennett had 4 carries for 63 yards and 1 Rushing TD. Bennett’s lone touchdown right before half was a backbreaker for the Bluejays, and gave the Warriors a 23-8 lead going into halftime. Josh Abbott scrambled for a 34-yard TD run in the 3rd quarter.

Defensively the Warriors played about as well as they could have imagined. They gave up the only Ashland touchdown on their second play from scrimmage for 47 yards, but after that the defense only gave up 81 yards the rest of the game, and Dylan Egr scored Wahoo’s first touchdown of the season as he scooped up the Ashland fumble and returned it 22 yards. The defense was able to force 3 turnovers and 1 interception on the night, which allowed Wahoo to pull away in the 2nd and 3rd quarters.

Wahoo’s Special Teams unit chipped in as well, as Blake Kaiser made a 37-yard field goal, and the punt block team, with Sam Kolterman, blocked a punt in the fourth quarter allowing Jake Ruzicka to pick up the punt and return it 22 yards for the final Warrior touchdown.

Wahoo will welcome Lincoln Christian (0-1) to town on next Friday night. 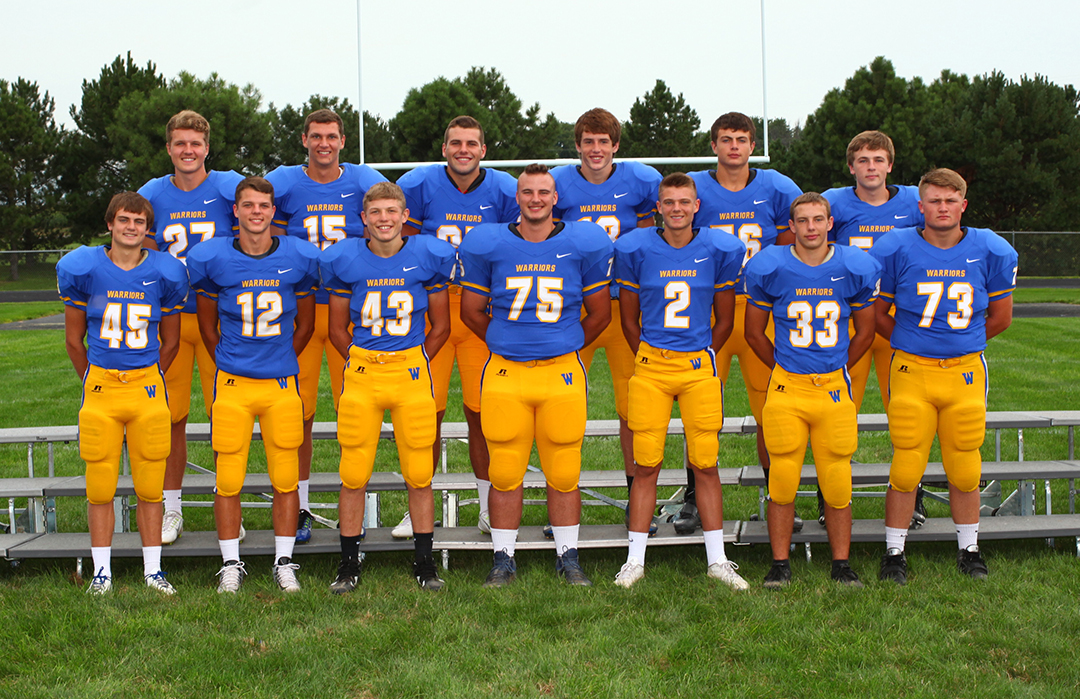