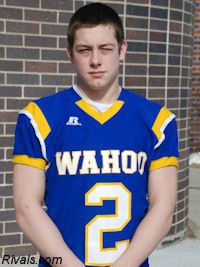 The 5-foot-10, 180 pound Kavan played a big role in getting Wahoo to the state semifinals and led Class C-1 in rushing with 1,895 yards and 16 touchdowns. Kavan carried the ball 212 times, averaging 8.94 yards per attempt.

"He's a very dynamic player," Wahoo head coach Chad Fox said of Kavan. "In terms of offensive fire power he just has big play ability. At any point he can take a run to the house and that's the exciting thing about Tyler. His running style is very interesting. He says he's a speed type runner that doesn't like to run over people, but he is still fairly physical. He's probably got one of the better stiff arms that I have ever seen in high school. He does not like to go out of bounds. If he goes out of bounds and somebody is forcing him to go he usually lowers the boom when he's going in that position.

"He usually isn't going to run somebody over, but he's got a nice little cut and he's got great side-to-side movement. He's just a tremendous athlete."

Kavan has even showed some of that tremendous athletic ability in his testing numbers outside of football. Before his junior season Kavan broke the school record in the pro agility shuttle run at Wahoo with a time of 3.93 seconds.

On the track he's been clocked at 11.4 seconds in the 100 meter dash and his personal best mark as a sophomore in the long jump was 19-9.

"I have pretty good side to side movement and my vision is pretty good," Kavan said. "I can really see the future and what's going to come on a play. That's probably my strength."

Over the summer Kavan plans to attend Nebraska's camp, and possibly a few others depending on what schools he hears from over the spring evaluation period.

The biggest challenge for Kavan going forward is topping a near 1,900 yard season. Fox feels like Wahoo has what it takes to compete for a state title in 2012 and another big year by Kavan could help them get over the top.

"I think that 2,000 yard mark is what he really has his eyes on for next season," Fox said. "He was really close last year and he had maybe one game where he didn't really run quite as well as he would've liked and that probably kept him from 2,000 yards. He's a special player and I think he's got a lot of great things ahead of him."