Wahoo celebrated Senior Night on Friday night with a special guest: Jaxon Kreifel and his family.

It was the final night the Wahoo seniors were going to take the field, and they shared the spotlight with Jaxon, a Wahoo Elementary 2nd grader. Not only did the Warriors dominate on the football field, they helped the Kreifel family celebrate a special night for Jaxon.

Jaxon and his father Jim led the Warriors on the field, and it didn’t take Wahoo long to put some points on the board. Wahoo cruised to a 55-0 victory, scoring 2 touchdowns each quarter.

Offensively, the Warriors were led by Gavin Iversen with 142 yards receiving on 7 catches, 2 of them for touchdowns. Josh Abbott was 10-16 for 158 yards and 3 touchdowns. On the ground Wahoo was led by Ethan Stratman with 8 carries for 64 yards, 2 of those rushes were touchdowns. Abbott added 9 carries for 54 yards and 1 touchdown.

Defensively, Ryan Walker led the Warriors with 10 tackles, Iversen added 8 tackles and a fumble recovery for a touchdown. The defense was attacking all night, and registered 12 tackles for a loss on the evening and 3 sacks. Wahoo also managed to force 5 turnovers.

Wahoo’s season comes to a close with a record of 5-4. This is only the 3rd time in 13 years that the Warriors will not participate in the post-season playoffs.

The Warrior Football team picked up a huge victory on Friday night by beating Bishop Neumann in a District 4 match-up.

Wahoo was able to capitalize on several of the Cavaliers’ miscues and mistakes, as they dominated on both sides of the ball in the second half.

Offensively, Ethan Stratman, who had 29 carries for 143 yards and 3 touchdowns, led the Warriors. Gavin Iversen added 7 carries for 129 yards and 2 touchdowns.  Justin Jarman led all receivers with 3 receptions for 25 yards. Josh Abbott was 6-11 for 56 yards passing on the evening.

Ryan Walker led the Warrior defense with 14 tackles, while Jarman added 10 tackles. Iversen and Doug Ford both added 8 tackles a piece on the evening. Ford also had a fumble recovery that helped Wahoo hold Neumann’s offense to 10 points on the evening. The Warrior defense was on the attack all night registering a season-high 12 tackles for a loss.

Wahoo had a tough night versus the Columbus Scotus Shamrocks, as turnovers plagued the Warriors in their fourth loss of the season. Wahoo struggled on offense to establish the line of scrimmage and couldn’t seem to find an answer on defense in trying to stop the Shamrock offense.

The Warrior offense was led by Ethan Stratman on the ground, 27 yards on 13 carries, and Gavin Iversen had 2 carries for 26 yards. Justin Jarman had 1 catch for 77 yards and a TD. Josh Abbott was 5-17 for 136 yards and 1 TD pass and 4 interceptions.

Defensively, Ryan Walker led the Warriors with 15 tackles and Gavin Iversen added 14 tackles and 1 interception. Jordan Ptacek added 11 tackles and Will Holdsworth had 8 tackles on the evening.

Wahoo will take on the Bishop Neumann Cavaliers on Friday, October 17.

Wahoo got off to a fast start against David City on Friday. They scored 20 points in the first quarter as they rolled their way to a Homecoming victory on Friday night.

Offensively, Ethan Stratman, who rushed for 120 yards on 17 carries, led the Warriors. Josh Abbott had 2 rushing TD’s. Justin Jarman had 2 catches for 63 yards and 1 receiving TD. Gavin Iversen and Jordan Ptacek both added a TD reception each.

Wahoo will travel to top 10 ranked Columbus Scotus on Friday for their next contest.

The Warrior football team got off to a quick start on Friday night, as they took on the Columbus Lakeview Vikings.

The Vikings elected to take the ball to start the game, and they were turned back very quickly, as their first drive was a three-and-out. That gave the ball to the Warrior offense, which, after two plays, found themselves in the end zone.

Wahoo’s offense had their best night yet, racking up 589 total yards of offense on only 53 plays from scrimmage. Gavin Iversen led the Warriors in the air and on the ground. Iversen had a career night with 121 yards rushing on 4 carriers and 153 yards receiving on 4 catches. Josh Abbott also had a solid night, going 6-14 with 257 yards passing, and 2 of those passes for TD’s. Abbott added 62 yards rushing on 14 carries. Ethan Stratman led all rushers with 15 carries for 129 yards. Justin Jarman had 2 catches for 104 yards as well.

Defensively, the Warriors also posted their best night of the season. They allowed 338 yards of offense, but the Vikings ran 80 plays of offense. Ryan Walker led all tacklers with 12 tackles. Iversen and Doug Ford each had 9 tackles. Seth Bohac and Josh Abbott both played well in the secondary, with each of them getting an interception. Bohac also had 2 pass break-ups.

Wahoo will be looking to make it two in row, as they take on the David City Scouts on Friday, October 3 for the 2014 Homecoming Game.

The Wahoo Warrior Football Team continued to struggle on Friday night in their game versus the Syracuse Rockets.

The Warriors jumped out to an early lead when Blake Kaiser kicked a 32-yard field goal in the middle of the 1st quarter, but that would be the only time the Warriors would lead in the game.

The offense was plagued with turnovers and inability to finish drives. Wahoo was in scoring position several times in the first half, but was unable to find the end zone. Josh Abbott led all rushers with 13 carries for 61 yards. Abbott also was 3-10 passing for 57 yards. Gavin Iversen had 2 catches for 27 yards, and Justin Jarman had 1 catch for 30 yards.

Defensively the Warriors were led by Iversen with 10 tackles, Jarman and Ethan Stratman each had 7 tackles, and Will Holdsworth had 5 tackles. Wahoo had a tough time stopping Syracuse’s play-action passing attack in the first half and in the second half the Rockets’ size advantage was evident when their running game got going.

Wahoo will travel to Columbus Lakeview on September 26 to take on the Vikings.

The Wahoo Warrior football team earned its first victory for the 2014 season on Friday night as they took on the West Point Cadets.

The Warrior offense was lead by Ethan Stratman on the ground with 118 yards on 22 carries and 1 rushing TD. Gavin Iversen added 84 yards on 15 carries and another rushing TD. Iversen led all receivers with 4 catches and 34 yards and 1 receiving TD. Justin Jarman had 2 catches for 36 yards. Josh Abbott was very efficient throwing 10-13 for 94 yards and 1 TD.

Defensively, the Warriors rebounded and forced 3 turnovers and only allowed 203 yards of total offense on the evening. Jake Ruzicka and Clayton Redding led all tacklers with 8 tackles for each of them. Will Holdsworth had 7 tackles, as well. The Warrior defense also recorded a safety on West Point’s first drive.

Wahoo struggled again this past Friday night versus Norfolk Catholic. Wahoo had a tough time matching up to the Knights’ size and speed.

On offense Wahoo was led by Gavin Iversen, who led the Warriors in rushing with 29 yards on 9 carries. Iversen also had 5 receptions for 84 yards.

Josh Abbott stepped in to lead the offense at quarterback. Abbott was 7-15 for 120 yards throwing.

Defensively, the Warriors were led by Iversen with 9 tackles and Abbott with 7 tackles.

Wahoo struggled in its 2014 season opener versus Ashland-Greenwood.

The offense had a tough time sustaining drives and establishing control of the line of scrimmage. Ethan Stratman led Wahoo with 84 yards rushing on 18. Justin Jarman was the leading receiver with 3 catches for 101 yards and 1 TD. Seth Bohac was 9 for 21, throwing for 142 yards and 1 TD and 1 INT.

Defensively, the Warriors struggled, as they gave Ashland good field position 4 different times. The Bluejays started 4 drives inside Wahoo’s 10-yard line. All of those resulted in scores for Ashland-Greenwood. The defense was lead by Gavin Iversen with 10 tackles (6 assisted, 4 unassisted) and Will Holdsworth (7 assisted, 2 unassisted). Doug Ford and Mitchell McGill both caused fumbles, and McGill also recovered another.

The road doesn’t get any easier for the Warriors, as Wahoo will travel to Top 5 ranked Norfolk Catholic on Friday, September 5 to take on the Knights. 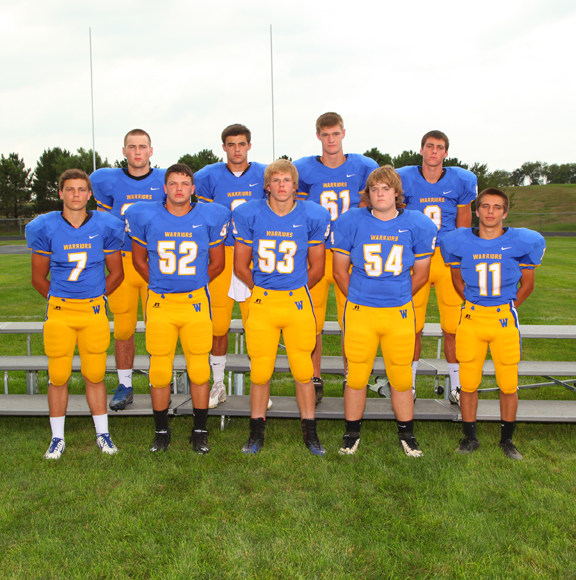