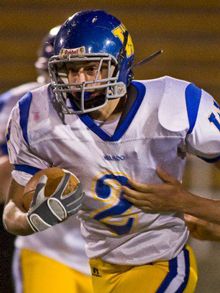 Last year Wahoo High School made it to the Nebraska Class C-1 semifinal for the second time in school history, and this year they hope they can make the next jump into the championship game.

“We definitely have the players to make a run like that,” said head football coach Chad Fox. “But there are so many things that have to happen for that kind of success.”

Fox continued on to explain that those things include catching breaks, winning the turnover battle, minimizing the impact of what you view as “bad calls” from the refs have, and staying healthy.

Staying healthy is one of the most important things for Wahoo this year, because even though they return a lot of experienced starters, Fox feels like they don’t have much depth at their skill positions.

“It’s the typical C-1 school where you are going to get 50-60 kids out, and that depth is always a concern,” he explained. “You take some injuries and have trouble staying healthy, and it makes it really hard to make a run into the post season.”

There is a lot of start power on this Wahoo team, filling up a lot of the all district team last year, but Fox has them buying into a team system.

“Some times that’s hard to manage, but we try to make sure that everyone on the team understands that they have a role,” said the head coach. “Some roles are going to be a little bigger than others, but there is no role on the team that’s bigger than the team itself.”

Having nine returning starters on offense and defense should provided the kind of leadership required to help get young kinds to by into that system.

Not only will the senior class be good for providing leadership, but is also filled with talented players. Senior running back Tyler Kavan ran for 1895 yards last year, finding the end zone 15 times. After setting the school record for single season rushing yards, the 5-foot-11, 180 pound prospect, has his sites on the next level - maybe even a chance to walk-on at Nebraska.

“I would be excited and feel honored, not a ton of players get the opportunity, and I would think about it really hard, that's for sure,” said Kavan. “I have a lot of other schools who are options as well, but Nebraska is definitely the dream school.

Joining Kavan in the Wahoo offensive attack will be quarterback/free safety Jon Abbott, who is said by many to be the best Warrior quarterback in the last ten years. The 6-foot-2, 170 pound prospect rushed for over 600 yards last year, also throwing for 15 touchdowns. He also recorded 41 tackles and had a team leading five interceptions.