Wahoo High School players trot to the field at 12:01 a.m. Monday for the first drills of the football season. Many basketball teams hold midnight practice to open the season, but it's somewhat new to football. "It just happened to work without school tomorrow," said head coach Chad Fox. 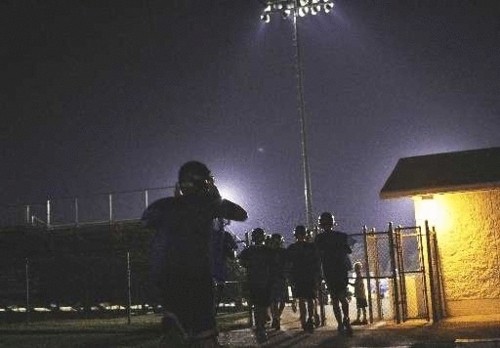 Launch the media gallery 1 player
Wahoo High School players trot to the field at 12:01 a.m. Monday for the first drills of the football season. Many basketball teams hold midnight practice to open the season, but it's somewhat new to football. "It just happened to work without school tomorrow," said head coach Chad Fox.

They burned brightly in the wee hours at Wahoo High School for the first high school football practice of the season in the state.

Midnight Madness at Wahoo? And not for basketball? That's the sport normally associated with midnight practices, and the game in which Wahoo has excelled for most of the past 20 years.

For 90 minutes, beginning shortly after midnight, the Warriors went through their first drills of the season.

"I didn't think I could stay awake that long," running back Layne Moore said. "Throughout the whole day, you're thinking, 'Wow, practice is like in four hours.'"

Monday was the opening day of practice for Nebraska teams that have games Aug. 28 or 29. Wahoo opens Aug. 29 at home against Omaha Roncalli.

In Iowa, Monday was the first day of practice for all high school football teams.

Midnight practices have been common for years in college basketball on the first day the NCAA permits practice, and high school football teams in California, New Jersey, Ohio and Texas have done it this year.

It's permissible under Nebraska School Activities Association rules, Executive Director Jim Tenopir said, and a few high school basketball teams in Nebraska and Iowa have done it over the years. Tenopir said he is unaware of football teams trying it in Nebraska, although schools don't have to report practice schedules to the NSAA.

Wahoo football coach Chad Fox has had the idea since coming to the school seven years ago. He decided to try it this year because Wahoo teachers and students didn't have to be in school Monday. Teachers were to report today, and school starts Thursday.

The Warriors practiced in shirts, shorts and helmets only. The pads come Wednesday, the first day that tackling and blocking are allowed by state rule.

Matt Myers, the team's best lineman, said he preferred the late-night hours to waking up for a normal 6:30 a.m. practice.

"I thought maybe more people would be yawning when Coach was talking," Myers said. "There was more energy to practice than I thought."

Not one of the 54 players was late. As they arrived, the scoreboard was counting down the seconds until Sunday turned into Monday and practice was permissible.

"The kids were upset when I told them they couldn't be on the field until after 12," Fox said. "They wanted to get out and do some things in advance, but we had to hold them back."

The curious included about 30 parents, siblings and girlfriends. The fathers grouped together around picnic tables near the concession stand. The mothers, some with cameras, watched from the grandstand.

Mothers of the senior players prepared sack breakfasts of orange juice and doughnuts with sprinkles in the team colors of blue and yellow, said Claire Moore, Layne's mother, and Jodi Gensler, who has two sons on the team.

Claire Moore said she thought her son was joking when he told her about the midnight practice. But she warmed quickly to the idea.

"I wondered why my son likes to stay out late. It's beautiful at this time of night," she said. "Kudos to Coach Fox for thinking of something like this."