Although penalties and turnovers plagued Wahoo in Friday's playoff semifinal loss to Norfolk Catholic, the Warrior Defense left its mark, and didn't make life easy for the Knights. Above, #55 Jack Sutton makes his presence known with a powerhouse tackle!
Launch the media gallery 1 player

Although penalties and turnovers plagued Wahoo in Friday's playoff semifinal loss to Norfolk Catholic, the Warrior Defense left its mark, and didn't make life easy for the Knights. Above, #55 Jack Sutton makes his presence known with a powerhouse tackle!

Season of Records!
Warriors with school record-breaking performances this season:

Wahoo’s season came to a close with a loss to Norfolk Catholic on Friday night in the NSAA Class C-1 Semifinal game. Wahoo struggled on offense, getting into scoring position twice in the first half, but penalties and turnovers stopped the drives and kept the Warriors off the scoreboard.

Defensively, Wahoo played well enough to win the game, holding the #1 Norfolk Catholic Knights to 14 points; however, special teams and the offensive units couldn’t provide a spark to get momentum turned over to the Warriors’ side.

Offensively, Dylan Egr had 87 yards on 20 carries and Cade Belitz had 2 catches for 25 yards. Brendan Lacey added 2 catches for 17 yards and Billy Hancock had 1 catch for 29 yards. 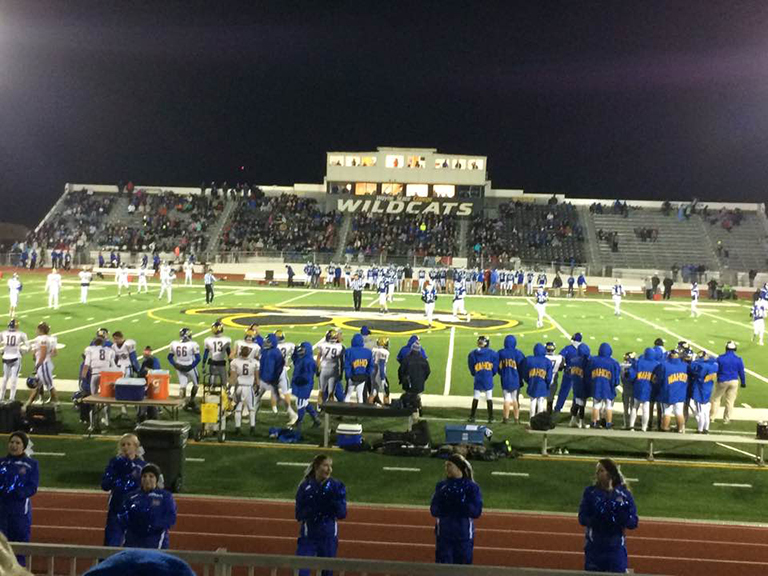 The Warrior Defense was led by Cade Belitz with 8 tackles and 1 tackle for a loss, followed by Sam Kolterman with 7 tackles. The defensive ends Trevor McEvoy and Tucker Hancock were challenged all night with Wayne’s outside running game. Each recorded 4 tackles and 1 sack. Cameron Quick and Dylan Egr each had an interception on the evening.

Offensively, Wahoo had 161 yards on the ground with Egr getting 131 of those yards and 2 touchdowns, while Quick threw 160 yards going 6-11 and 2 TD passes. Bret Walker had an 11-yard catch and Billy Hancock had a big 73-yard touchdown catch and run right before half. Belitz and Brendan Lacey had 2 catches each which extended crucial drives that finished in touchdowns for the Warriors.

Egr probably had the play of the night on his 50-yard punt return in the 2nd quarter, where he weaved in and out of the Blue Devil tacklers for a touchdown.

Wahoo will travel to the top-ranked Norfolk Catholic Knights on Friday, Nov. 10 at 7:00 p.m. for a chance to advance to the State Championship game for the first time ever in school history. 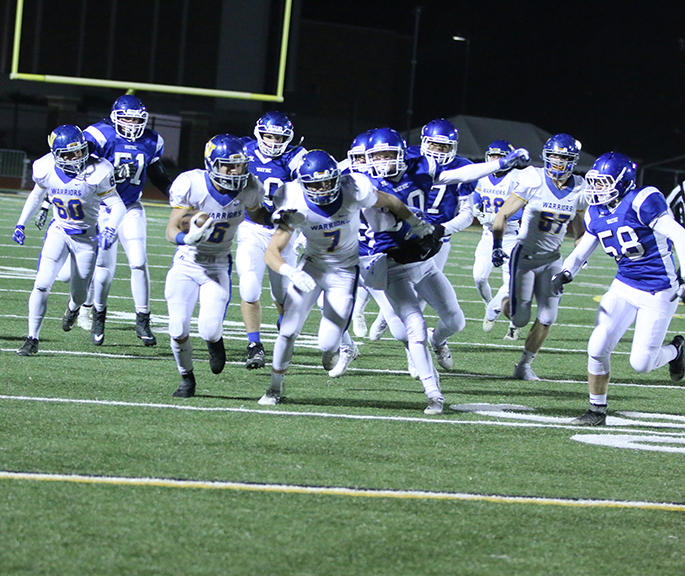 Untouchable! Warrior senior Dylan Egr once again works his magic on offense, running for one of his three total touchdowns in Friday night's huge 42-8 win over Wayne in the C1 playoff quarterfinal! (photo courtesy Renee Hancock)

Wahoo will advance to the Quarterfinals in the NSAA C-1 Playoffs after a 42-28 victory over Kearney Catholic in Round 1!

Defensively Wahoo controlled the line of scrimmage and kept the pressure on the Stars from start to finish. Billy Hancock led all tacklers with 12 tackles. Sam Kolterman had another impressive evening with 10 tackles, including 2 tackles for a loss, and 1 sack. Jack Sutton added 2 sacks and 7 tackles. Brandon Swahn had 7 tackles and 3 sacks on the evening.

Offensively the Warriors took to the ground to control the game. Dylan Egr led all rushers with 36 carries and 314 yards and 5 rushing touchdowns. Brendan Lacey had 2 receptions for 32 yards and 1 touchdown catch.

Wahoo will travel to Wayne for the Quarterfinal match up against the 7-3 Blue Devils. 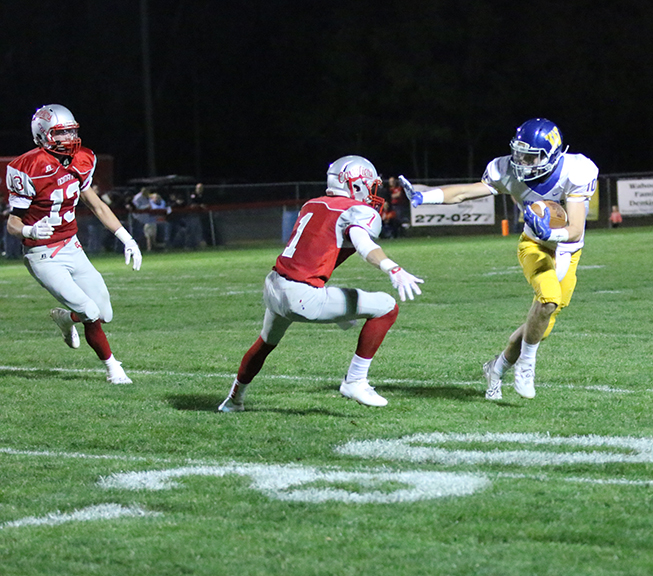 The points didn't come easy (scoreless first half), but Wahoo pulled out the 13-0 win over Bishop Neumann to close the regular season and capture the C1-4 District title.
Wahoo advanced to playoffs, and have defeated both Kearney Catholic and Wayne. Wahoo will now travel to Norfolk Catholic to take on the #1 Knights in the Nov. 10 playoff semifinal. (photo courtesy Renee Hancock)

Defensively the Warriors were lead by Billy Hancock with 16 tackles and 1 tackle for loss, Bret Walker with 12 tackles and a fumble recovery, and Sam Kolterman with 10 tackles and 2 sacks. Brandon Swahn also had 10 tackles, and Tucker Hancock had 8 tackles.

On offense Dylan Egr led all rushers with 88 yards on 21 carries and 2 rushing touchdowns. Cameron Quick was 14-27 passing for 184 yards. Brendan Lacey led all receivers with 8 catches for 82 yards, while Cade Belitz had 3 catches for 48 yards, and Billy Hancock had 3 catches for 54 yards.

Wahoo will welcome the Kearney Catholic Stars (7-2) to Wahoo next Friday for the 1st Round of the Playoffs. 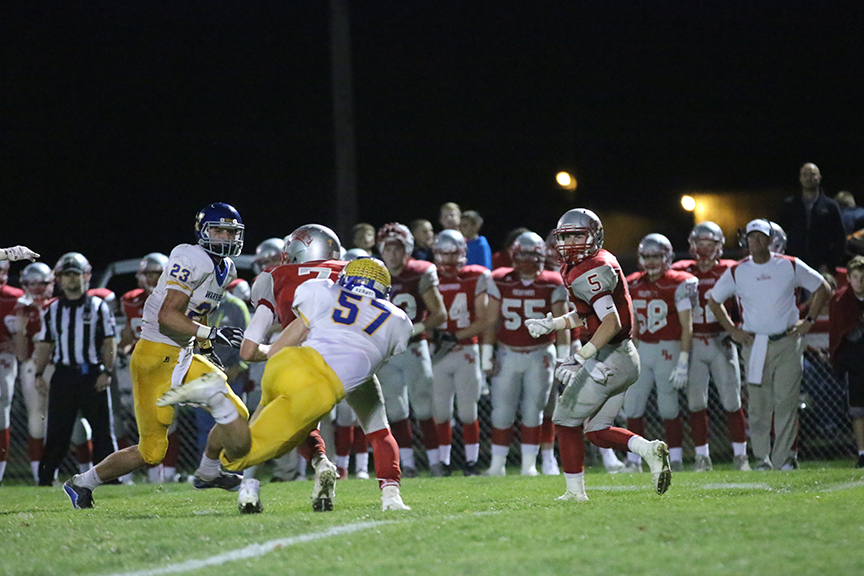 Battle of the defenses! Wahoo's Sam Kolterman (#57) made his presence known, as he goes for the sack.
Both offenses had their hands full with solid defensive challenges, but two Dylan Egr touchdowns in the second half propelled Wahoo to the 13-0 shutout. (photo courtesy Renee Hancock)

Wahoo used a 21-point first quarter to cruise to victory over the top-ranked Aquinas Monarchs on Friday night.

The Warrior Defense dominated the Monarchs by holding them to 196 yards of total offense. The defense was led by Sam Kolterman, who registered 21 tackles, 1 sack, 1 forced fumble, 1 fumble recovery and 1 blocked punt. Tucker Hancock also had an outstanding evening with 19 tackles, 1 tackle for loss, 1 sack and a fumble recovery. Billy Hancock chipped in with 15 tackles and 1 tackle for loss. Dylan Egr had an interception return for a touchdown in the second quarter that allowed the Warriors to take a 27-7 lead into halftime.

On offense, Egr had 107 yards rushing on 23 carries. Egr also had a 55-yard punt return for a touchdown and a 27-yard pass to Bret Walker to seal the game in the 4th quarter. Cameron Quick had a pretty good night passing, going 9 for 13 for 117 yards and 2 touchdown passes. Brendan Lacey led all receivers with 5 catches for 74 yards and 2 touchdown catches.

Next week the Wahoo Warriors will travel to Bishop Neumann for their final regular season game.

Wahoo logged another victory on Friday night playing on the road at North Bend Central.

The Warriors didn’t wait long to find the end zone. For the first play from scrimmage, Cameron Quick found Brendan Lacey for a 61-yard touchdown pass. Lacey finished with 3 catches for 79 yards and 2 touchdowns.

On defense, Wahoo was tested all night with the Tigers’ short passing game. Defensively, Tucker Hancock played really well, with 9 tackles and 2 tackles for a loss. Egr had 3 tackles and 1 interception, while Lacey had the play of the night, returning an interception for a 99-yard touchdown!

Wahoo will travel to Syracuse next week to take on the Rockets.

The Wahoo Warrior football team posted their 4th shut out of the season on Homecoming Night when the played the David City Scouts.

The Warrior defense was dominant again, giving up just 66 yards of total offense to the Scouts. Linebacker Sam Kolterman led the defense with 6 tackles, 2 tackles for a loss, 1 sack and a blocked punt. The defensive line controlled the line of scrimmage all night with the efforts of Brandon Swahn with 7 tackles, Jack Sutton 4 tackles (1 TFL), Tucker Hancock 5 tackles (2 TFL, 1 sack) and Trevor McEvoy 5 tackles (2 TFL).

The Warrior special teams unit had a big night with a blocked punt and 92 yards of returns. Egr had 1 punt return for 31 yards and 1 kick return for 28 yards.

Wahoo will travel to North Bend next week to take on the Tigers on Friday, September 29. 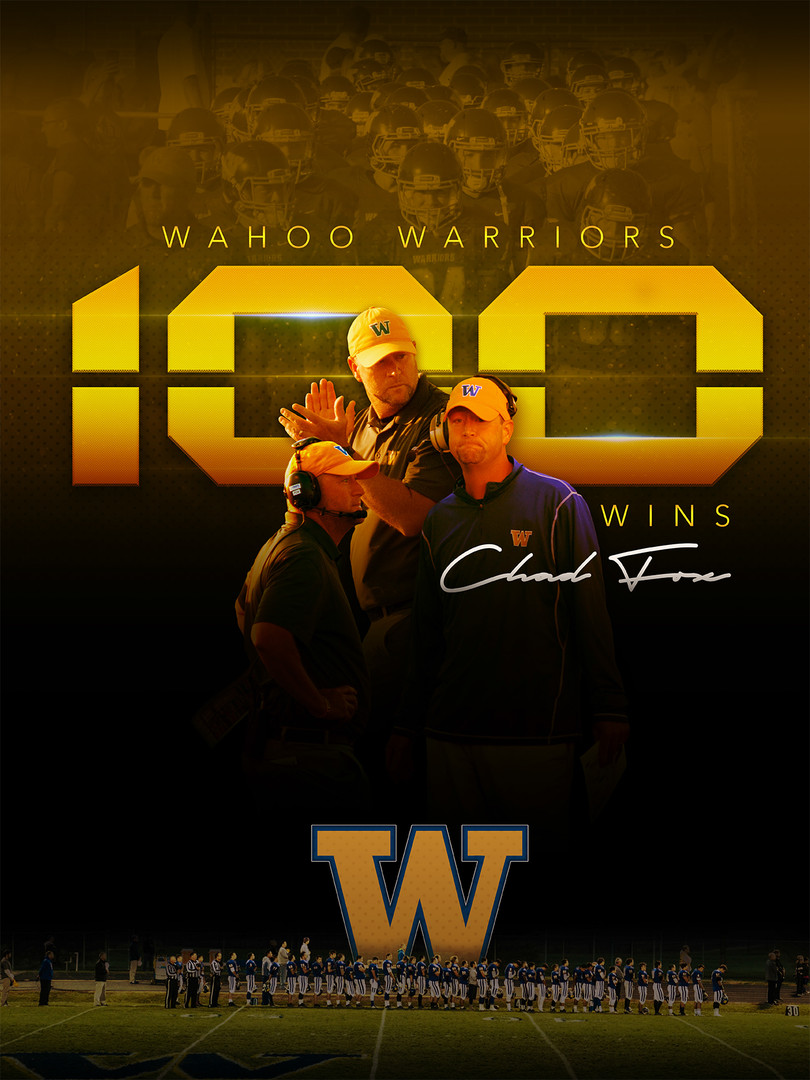 Wahoo had very little trouble with Louisville on Friday night. The Warriors cruised to a 55-0 victory over the Lions, racking up 454 yards of total offense.

Dylan Egr led the Warriors offensively, with 16 carries for 237 yards and 6 rushing touchdowns. Egr set a school scoring record with 36 points in a game. Cameron Quick was fairly efficient on the evening going 11 for 12 passing for 104 yards with 7 different receivers having catches. Brendan Lacey led all receivers with 4 catches for 93 yards.

Wahoo will welcome David City to town on Friday for the 2017 Homecoming.

The Warriors were handed their first loss in the 2017 season with a very physical game versus the top-ranked Norfolk Catholic Knights.

Norfolk Catholic held a 24-7 lead going into the 4th quarter, and Wahoo fought until the end, scoring 12 fourth quarter points, but that wasn’t enough to defeat the Knights.

The offense struggled all night with converting on 3rd down. Dylan Egr led Wahoo on the ground with 156 yards and 1 touchdown. Ryan Ickler had some tough runs up the middle with 5 carries for 32 yards.

After Norfolk Catholic’s first offensive play, Wahoo did a pretty good of keeping their running game in check. Norfolk Catholic had to go to the air to convert some critical 3rd downs, and found the end zone twice in the 4th quarter.

On Special Teams Egr had another spectacular evening with 3 kickoff returns for 142 yards, including taking the opening kickoff 96 yards for a touchdown to start the game.

Wahoo looks to get back to its winning ways playing Louisville (1-2) next week.

Wahoo was plagued by penalties and got off to a slow start on Friday versus Lincoln Christian. The Warriors had to overcome 16 penalties on the evening to cruise to a 46-0 victory to give Lincoln Christian their first home loss at their new football field.

On defense, Wahoo was tested in the air by Lincoln Christian’s passing attack. The Warrior defense held the Crusaders to 165 yards of total offense, and forced a pair of turnovers.

Dylan Egr tied the school record (previously set by Jon Abbott) for career interceptions with his first interception of the season, giving him a career total of eight interceptions.

Offensively, Cameron Quick had a very efficient game passing, throwing for 17-24, 265 yards and 2 touchdowns. Quick also added 1 rushing TD. Quick spread the ball around in the passing game, hitting 7 different receivers. Cade Belitz had 6 catches for 74 yards and 1 TD, Brendan Lacey had 3 receptions for 82 yards and 1 TD, and Billy Hancock had 3 catches for 61 yards. On the ground, Egr had 23 carries for 137 yards and 2 rushing TD’s.

Wahoo’s Special Teams unit was a force again when Kolterman blocked a Lincoln Christian punt in the end zone, and Ryan Ickler recovered a fumble for a touchdown in the 2nd quarter.

Wahoo will travel to Norfolk next Friday to take on the top-ranked Knights of Norfolk Catholic at 7:00 p.m. at Memorial Field. 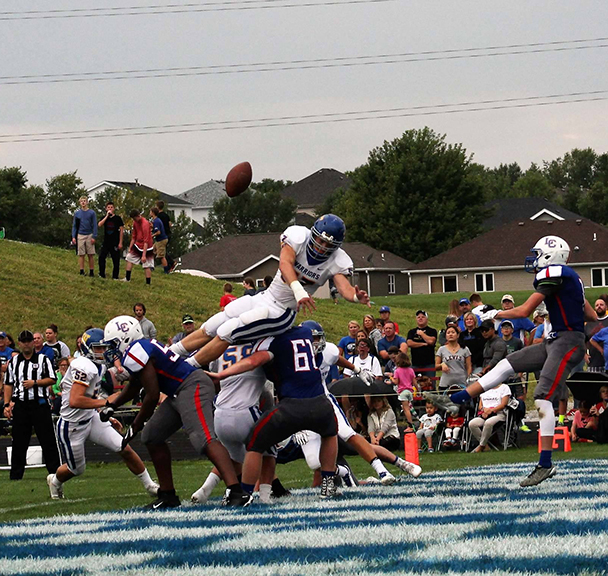 Despite 16 penalties, the Warriors were able to dominate at Lincoln Christian with a 46-0 shut-out on Sept. 1.
Wahoo advanced to 2-0, has posted 112 combined points, and has allowed no scoring. (photo courtesy Darlene Kolterman)

The Wahoo football team had a dominating performance in their home opener versus Ashland-Greenwood. The Warriors used a 29-point 2nd quarter to break the game open. Wahoo’s Defense played very well, allowing only 112 yards of offense for the entire game, on their way to shutting out the Bluejays.

Offensively, Wahoo was led by Dylan Egr, who had 15 carries for 138 yards and 4 rushing touchdowns. Trevin Luben also had a big night, rushing for 118 yards on 6 carries and 1 catch for 43 yards. Luben had 2 touchdowns as well.

Jesus Zaragoza stole the show in the Special Teams department. Jesus had a 29-yard field goal and went a perfect 6 for 6 with PAT’s. Jesus also had 5 touchbacks with his kickoff duties. 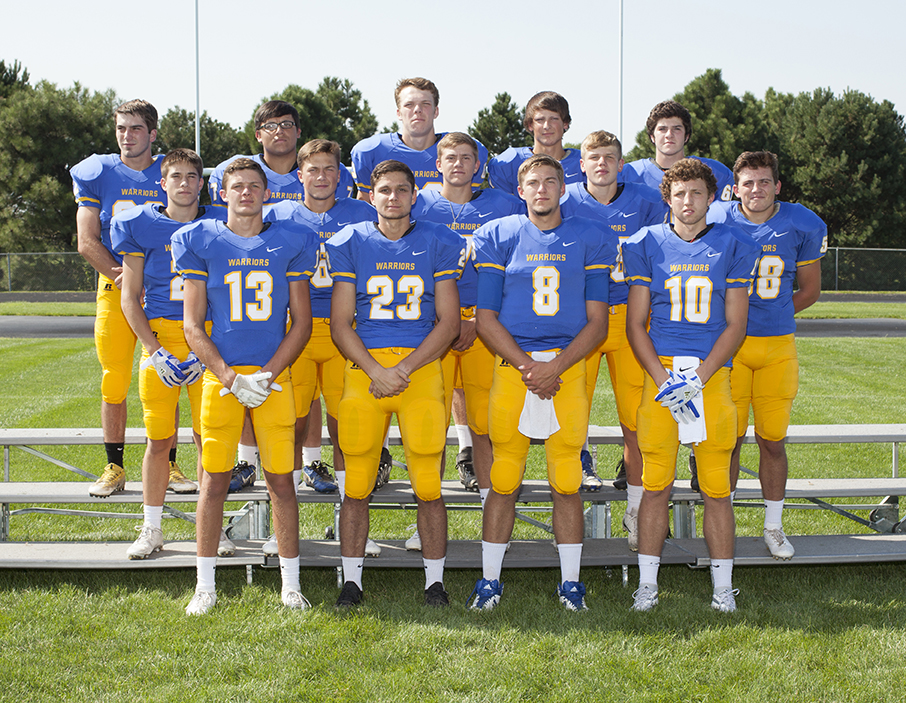