Warrior Boys fall to a dominant Mt. Michael in Class B State Quarterfinal

Injuries plague Wahoo in State losses to #3 Bulldogs and #1 Ogallala in consolation; Warriors seal 2018-2019 with 24-5 record

Wahoo takes down #1 Winnebago in semifinal; falls short to #2 Neumann in championship

Winnebago overpowers Wahoo in 1st Round of State Tourney

Glory Days Click HERE to view a website dedicated to the "Glory Days" of Wahoo Basketball . . . a chronicle of the championship years of 1988-1998, as well as highlights and features of the years since. This website is . . .

WARRIOR BOYS TAKE IT ALL THE WAY! 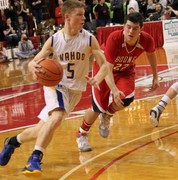 Take one state runner-up team, subtract two starters including the state's player of the year, add one tough schedule and mix thoroughly. Let simmer for ten straight wins and serve. At Wahoo the time-tested recipe for success has never . . . 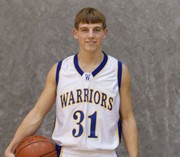 Congratulations to WHS Senior Jake Barry for being named the Runza/KPTM Fox 42 Athlete of the Week! Barry was featured on Wednesday (March 31) night's Channel 42 news broadcast (posted below). The honor stems from Barry's proven . . .

The Wahoo junior varsity boys’ basketball team finished the 2009-2010 season at 12-3. They started the season off with a win at home against Bennington. Casey Brown had 16 points and Christian Hohl and Brook Stuart both had 15. It was an . . .

On Saturday, February 21, the Golden Warriors and the Wahoo Boys Basketball Team had breakfast together at Wahoo Elementary. The breakfast was organized by Claire Moore, and sponsored by the parents of the boys basketball team. On . . .

The Wahoo Warrior Boys Reserve Basketball Team finished their successful season with a strong win over Elkhorn Mount Michael. The Warriors hit the road in an attempt to push their record to 9 and 4, and they accomplished their mission by . . . 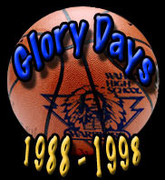 Warriors' Season Ends with Loss to Neumann at Sub-District Finals

Third Time Proves to be the Charm for Ashland-Greenwood: Bluejays Achieve Upset Against Warriors in First Round of State Tournament