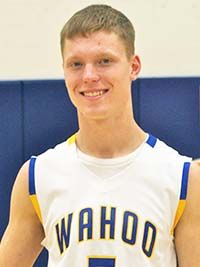 Take one state runner-up team, subtract two starters including the state's player of the year, add one tough schedule and mix thoroughly. Let simmer for ten straight wins and serve.

At Wahoo the time-tested recipe for success has never tasted sweeter.

Unbeaten at 10-0 and considered by many the best team in Class C-1, the Warriors took little time for all the ingredients to settle into place.

"I think early on we just had to figure out how to expand our roles from last year, and that's despite losing (C-1 player of the year) Max Cook and a good perimeter shooter in Casey Brown," says Wahoo head coach Kevin Scheef. "As a result everybody's role had to change and I think we have steadily made that adjustment."

Well, yeah. It's not just that Wahoo is 10-0, it's also that the Warriors have handed Class B preseason No. 1 Elkhorn South it's only loss, in the finals of the Wahoo holiday tournament, and also beaten 9-2 Fort Calhoun and a couple of 8-3 teams, Lincoln Christian and David City. The Warriors have tamed a rugged schedule as they prepare for Friday's game at 4-5 Platteview.

"We have some quickness and athleticism, which are strengths, even though we aren't a very big basketball team," says Coach Scheef, who is in his 12th year at Wahoo, after three years at Shickley and nine more at Aquinas, where he won a state Class C-2 title in 2006. "We also have quite a bit of experience back from last year and this is also a very unselfish group of players we have on the team."

If you are watching Wahoo basketball, of course, you are going to see a 1-3-1 zone defense, perhaps the most famous defensive set in Nebraska high school hoops, and the Warriors will also feature a motion offense - unless it can score quick points off the break, which is its wont.

When the postseason arrives even a historically great program like Wahoo's - eight state titles from 1988 to 1998 - will be challenged by a deep C-1 subdistrict, which will also include Bishop Neumann, Columbus Lakeview, Columbus Scotus and David City. "All those teams could win 16 or 17 games by then," says Coach Scheef. "Our sub-district is loaded."

Win that, catch your breath, and play the district final against, say, Fort Calhoun or 2012 state champ Boys Town. No easy road, for sure.

As always Class C-1 boys basketball is filled with excellent teams but there might not be a better one than Wahoo.