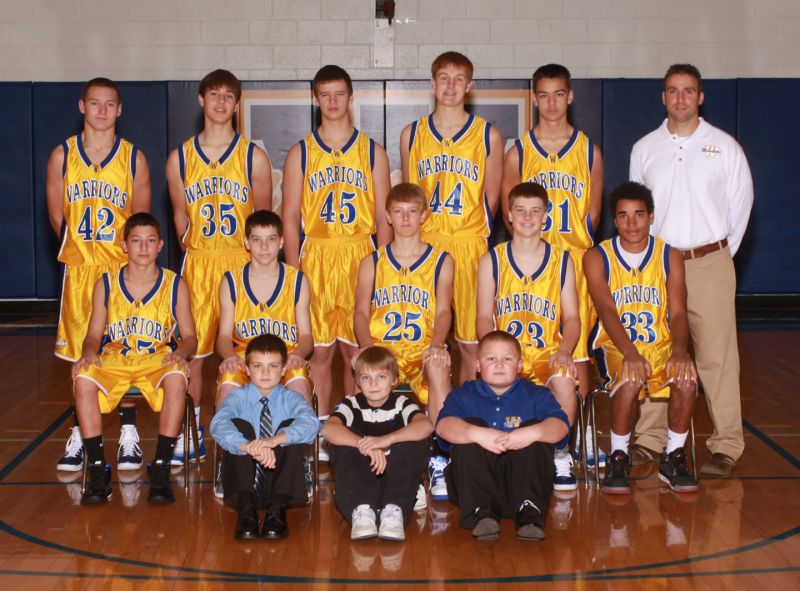 The freshman boys’ basketball team finished their season 10-2 with a win over the Mt. Michael Knights Thursday night, February 10.

The Warriors had a sluggish first half turning the ball over 15 times, but holding on to 29-24 lead at the break.

“I was never worried, but felt that we needed to do a better job of taking care of the basketball the second half for us to get the victory,” Coach Marc Kaminski commented. “We were a little out of sync offensively, but still played hard and aggressively.”

The Warriors went to the foul line 34 times compared to Mount Michael’s 11 attempts.

Ben Scheef recorded another double-double, his ninth of season, scoring 23 points and grabbing 18 rebounds. Scheef also had 2 blocked shots and 4 assists on the night. Josh Langemeier also followed up with a solid performance scoring 13 points and recording 7 rebounds and 6 steals. Brandon Zetocka chipped in with 7 points.

“It’s been a team effort all year. These kids have gotten better each night and that was our number one goal at the beginning of the year,” Coach Kaminski commented about the season. “This team should be very proud of their accomplishments this year; I know that I’m extremely proud of all of them.”

The freshman boys’ basketball team was runner up in the DC West Tournament  Saturday morning, defeating Elkhorn Mt. Michael in game one and suffering a loss to Fremont Bergan in the 2011 D.C. West Reserve Basketball Tournament Championship.

The Warriors defeated Mt. Michael 42-39 in their opening game. Josh Langemeier led the way for the Warriors with 17 points, while Alfonso Buol added 8 points. Kirk Lindstrom grabbed 14 rebounds in the victory.

The freshman boys’ basketball team improved their record to 8-1 on the season by downing the Arlington Eagles 75-41.

The Warriors forced the Eagles into 30 turnovers and just 12 of 42 shooting from the field on the night.

The Warriors ended a solid first quarter with a 17-5 lead, but Bennington came out firing behind the arc in the third quarter digging into the Warriors’ lead at intermission. The Warriors never looked back in the second half, and cruised to their 5th straight victory.

Josh Langemeier had an excellent game scoring 22 points and racking up 7 steals on the day.

“I told Josh before the game that he’s the gas that runs our engine on defense and he showed that today,” Coach Marc Kaminski commented. “I told him that the team feeds off of him on the defensive end.”

Ben Scheef continued to dominate with another double-double with 24 points and 17 rebounds. Seth Lindgren also grabbed 10 rebounds on the day for Warriors.

The freshman boys will travel to Arlington on Thursday night to take on the Eagles. This game was rescheduled from a snow postponement in early January. The girls will tip off at 5:00 p.m., with the boys to follow.

Wahoo jumped out to an early lead and held off a feisty Lutheran team for a 55-47 victory.

Ben Scheef recorded his sixth double double of the season by scoring a game-high 22 points and collecting 15 rebounds. Scheef also had 4 assists and 2 block shots. Josh Langemeier had 20 points and tailed 4 steals on the day for the Warriors.

The Warriors will travel to Bennington next Saturday to take on the Badgers. The girls’ game will begin at 9:00 a.m. with the boys to follow.

The freshman boys’ basketball team came up with a huge victory at Elkhorn South High School Friday night as they rolled to a 53-40 win.

The Warriors, who never trailed in the game, took a 6-point lead into halftime. Elkhorn South came out in the third quarter with some fire, cutting the Warrior lead to 2 points, but Wahoo withstood the Storm and pulled away for its fifth victory of the season.

Ben Scheef had an outstanding game, scoring 24 points and grabbing an amazing 26 rebounds. This was Scheef’s fourth double double on the season. Josh Langemeier scored 15 points and added 3 assists. Brandon Zetocka knocked down two huge three pointers and finished with 8 points on the night.

The Warriors will be back in action next Saturday, January 22, when they travel south to Lincoln to battle the Warriors of Lincoln Lutheran. The start time for the girls’ game is 9:00 a.m., with the boys to follow.

The freshman boys’ basketball team sprinted past the Seward Blue Jays Thursday night 52-23 to improve their record to 4-1 on the season.

The Warriors forced the Blue Jays to 35 total turnovers and racked up 28 steals on the night.

The Warrior offense ran out of the gates to a 39-16 half-time lead. The Warriors forced the Blue Jays to 26 turnovers and also out-rebounded the Jays 42 to 29.

The Warriors will travel to Arlington next Monday night to battle the Eagles. The girls will tip off at 6 :00 p.m., with the boys to follow.

The freshman boys’ basketball team suffered their first loss of the season with a 68-45 lost to the Cavaliers of Bishop Neumann.

The Cavaliers forced the Warriors into 28 total turnovers for the game, with 13 of those turnovers coming in the first quarter of play.

“It just was not a very good day for our basketball team,” Coach Marc Kaminski commented. “Give them tons of credit because they played well; we weren’t ready to play and they were, and it showed. We have to learn from this loss, move on, and get better.”

The Wahoo Warriors were lead by Ben Scheef’s double double with 24 points and 17 rebounds.

The Warriors will be back in action next Monday night against the Ashland-Greenwood Blue Jays. Tip off for the girls contest will be at 6:00 p.m. with the boys to follow at Wahoo High School.

The freshman boys basketball team improved their record to 2-0 on the season with a 68-48 victory over Fremont.

The Warriors took a 41-20 lead into halftime and never looked back.

The Warriors forced the Tigers to 26 turnovers, and out-rebounded Fremont 42 to 30.

“It was a very nice win for the boys. I saw a lot of good things, but I also saw a lot of areas that we need to improve in,” Coach Marc Kaminski commented.

Ben Scheef had a huge night for the Warriors scoring 22 points and grabbing 17 rebounds. Josh Langemeier scored 13 points and tallied 6 assists while Kirk Lindstrom added 11 points to the victory.

The boys’ freshmen team will be back in action after the Christmas break when they head across town to take on the Bishop Neumann Cavaliers. The game is set for Monday December 27. The girls will tip off at 9 a.m. with the boys to follow.

The freshman boys’ basketball team opened the 2010-2011 season with a 64-28 victory over the Raymond Central Mustangs Monday night, December 6.

The Warriors hit the court running by bolting out to a 16-2 lead at the end of the first quarter. The freshmen continued to roll to a 33-6 lead at halftime, holding the Mustangs to only three first half field goals.

The Warriors forced the Mustangs to 33 turnovers and out-rebounded Raymond Central 39-28.

The Wahoo Warriors were lead in scoring by Josh Langemeier with 15 points. Kirk Lindstrom had a double-double night with 12 points and 11 rebounds. Ben Scheef added 10 points and 7 rebounds.

The freshmen boys will be back in action next Monday night when they travel to Fremont to take on the Fremont High School Tigers. The boys’ game will follow the freshman girls’ game, which tips off at 5:45 p.m.