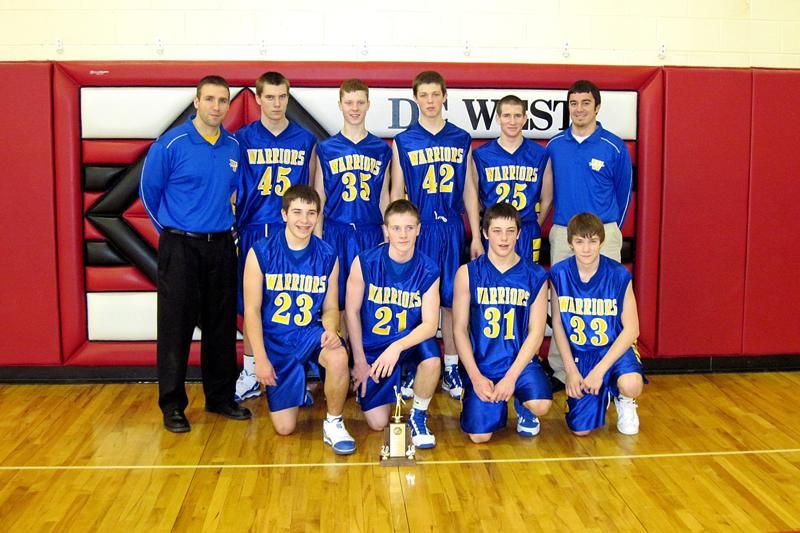 Click HERE to view photos of the game (photos courtesy of Joan Lindgren).

The freshman boys’ basketball team is perfect! The Warriors ended their season 12-0 with a win over the Mt. Michael Knights Thursday night, Feb. 11.

After a slow first half, the Warriors held on to a 13-11 lead at halftime, but just like they have all year, came out firing the second half. The Warriors outscored the Knights 37-9 in a dominating second half, racking up 18 steals and forcing 25 turnovers for the game.

Brook Stuart had the hot hand, shooting 4 of 6 from behind the arc, finishing with 18 points. Jon Abbott added 11 points while Mitch Shukis tallied 8 steals. Dylan Jaskulski finished with 7 rebounds for the night.

“It’s been a team effort all year, and the kids know it. It hasn’t been just two or three guys each night, it’s been all eight,” Coach Marc Kaminski commented about the season. “This team should be very proud of their achievements this year, but they also know they still have bigger and better things ahead of them if they continue to work hard.”

The freshman boys’ basketball team cruised to a pair of victories and their 11th straight win Saturday morning, defeating Elkhorn Mt. Michael in game one and Fremont Bergan for the 2010 D.C. West Reserve Basketball Tournament Championship.

The Warriors defeated Mt. Michael 51-41 in their opening game. Jonathan Abbott and Mitch Shukis led the way for the Warriors with 14 points each, while Tyler Kavan added 11 points.

In the championship game, the Warriors took control of Fremont Bergan in the second half, holding the Knights to only 7 second-half points. Wahoo cruised to a 48-19 victory and the tournament championship.

Abbott and Shukis once again led the way for the Warriors: Abbott poured in 19 points while Shukis chipped in 14 points. Shukis also grabbed 9 rebounds in the victory.

The Warriors are one victory away from a perfect season as they battle the Mt. Michael Knights at 6:00 p.m. Thursday night (Feb. 11) at Wahoo High School.

The freshman boys’ basketball team improved their record to 9-0 on the season with a 54-41 victory over the Aquinas Monarchs Monday night.

The Warriors held off a gritty Monarch team by forcing 20 turnovers and recording 14 steals.

The freshman boys will be back in action on Saturday, February 6 at the D.C. West Reserve Boys Basketball Tournament. The Warriors will play their first game against Mt. Michael at 9:00 a.m. The tournament will be played at D.C. West High School in Valley.

The Warriors took a three-point lead into halftime, but came out firing in the third quarter, opening the second half with an 8-0 run. The Warriors never looked back, and cruised to their 8th straight victory.

Wahoo jumped out to an early lead and held off a feisty Lutheran team for a 52-41 victory.

The Wahoo Warriors were led in scoring by Mitch Shukis with 15 points. Jon Abbott and Tyler Kavan each contributed 13 points. Abbott, Kavan, and Dylan Jaskulski each grabbed 5 rebounds in the win.

The freshmen will be back in action on Saturday, Jan. 30 against Bennington. The girls will tip off at 9:00 a.m. with the boys to follow.

The freshman boys’ basketball team sprinted past the Seward Blue Jays Friday night 54-26 to improve their record to 6-0.

The Blue Jays stifled the Warriors in the first half, forcing them into 15 first half turnovers.

“We have the turnover ‘bug’ right now. We are struggling to take care of the basketball,” commented Coach Marc Kaminski. “Between turning the ball over and free throw shooting, we still have a lot of improvement ahead of us, which is a good thing.”

Wahoo had yet another balanced attack in scoring with Jon Abbott leading the way with 14 points. Jacob Moline poured in 11 points and Brook Stuart added 10. Mitch Shukis had a big night on the boards with 7 rebounds.

The freshman basketball teams will play host to Lincoln Lutheran on Saturday, January 23 at Wahoo High School. The girls will tip off at 9:00 a.m. with the boys to follow. 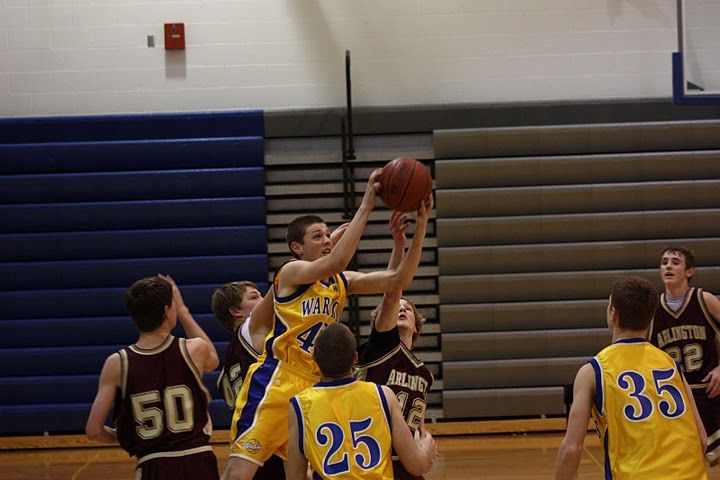 Launch the media gallery 2 player
The freshman boys’ basketball team improved their record to 5-0 on the season by downing the Arlington Eagles 68-35. 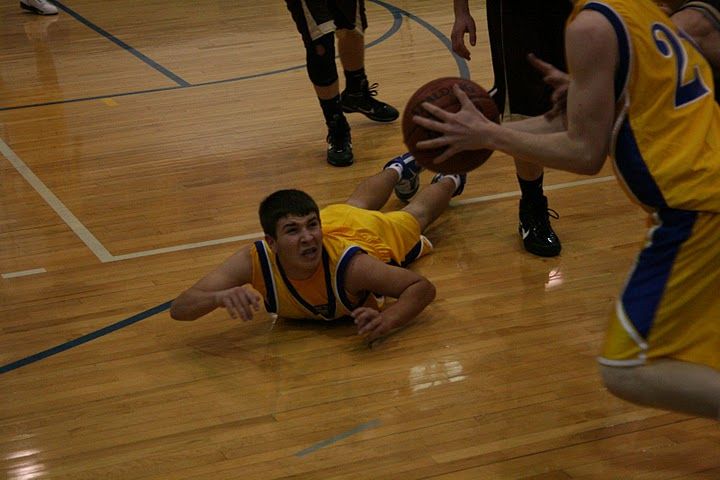 The Warriors forced the Eagles into 29 turnovers and just 11 of 39 shooting from the field on the night.

The Wahoo Warriors had another balanced attack with Mitch Shukis leading the way with 18 points. Jon Abbott scored 13 and Preston Raymond added 11. Dylan Jaskulski had a nice night on the glass by grabbing 7 rebounds.

The Warrior offense exploded in the second half by scoring 56 points, while holding the Blue Jays to only 10 second-half points. The Warriors forced 40 turnovers while only committing 13.

Wahoo had a balanced attack in scoring with Jon Abbott leading the way with 23 points. Brook Stuart and Tyler Kavan each poured in 17, while Mitch Shukis added 16. Preston Raymond had an outstanding night distributing the basketball with 12 assists.

The freshman basketball teams will play host to Arlington on Monday, January 11 at Wahoo High School. The girls will tip off at 6:00 p.m. with the boys to follow.

The freshman boys’ basketball team improved their record to 3-0 on the season with a 64-41 victory over cross-town rival Bishop Neumann Monday afternoon.

The Warriors out-rebounded the Cavaliers 34-15, and only committed 11 turnovers in the win.

“Coaches always worry about how their team will perform coming off of the Christmas break, especially with no practices, but I thought our kids played a pretty solid game on both ends of the floor,” Coach Marc Kaminski commented.

The freshman basketball teams will be back in action on Monday, January 4 at Ashland-Greenwood. The girls will tip off at 5:30 p.m. with the boys to follow.

The freshman boys basketball team improved their record to 2-0 on the season with a 54-18 victory over Fremont.

The Warriors took a 32-5 lead into halftime and never looked back.

The Warriors forced the Tigers to 28 turnovers, and played a very solid defensive game. The Warriors also racked up 24 steals for the night.

“It was a very good all around game for us tonight both offensively and defensively. I saw a lot of good things,” Coach Marc Kaminski commented.

The Wahoo Warriors were lead in scoring by Mitch Shukis with 13 points. Jon Abbott and Brook Stuart each poured in 10 points. Preston Raymond and Brook Stuart grabbed 6 rebounds apiece and Tyler Kavan had 7 steals.

The freshman boys will not be back in action until Wednesday December 30. They will have a morning showdown with Bishop Neumann at Wahoo High School following the freshman girls at 9:00 a.m.

The freshman boys basketball team opened the 2009-2010 season with a 47-42 victory over the Raymond Central Mustangs Monday night, December 7.

The Warriors jumped out to a fast start with a 13-7 lead after one quarter. The Mustangs battled back in the second quarter to take a 22-21 lead at the half. The Warriors came out in the third quarter with their foot on the pedal, outscoring Raymond Central 16-8, and they never looked back, despite a Mustang surge in the fourth.

The Warriors forced the Mustangs to 27 turnovers, which Coach Marc Kaminski thought was the key to the game.

“We are going to have to cause a lot of turnovers and pressure teams hard each game for us to be successful and win games. And I think that was the difference tonight,” said Kaminski. “I think we also need to play a little more consistent throughout the game. We looked great one quarter, and not so great in other quarters or parts of quarters, but it was a pretty typical first game.”

The Wahoo Warriors were lead in scoring by Jon Abbott with 13 points. Brook Stuart added 9 and Mitch Shukis 8. Preston Raymond chipped in 6 steals. The freshmen boys will be back in action on Monday night at Wahoo High School against Fremont. The girls will tip off at 6 p.m. with the boys to follow. 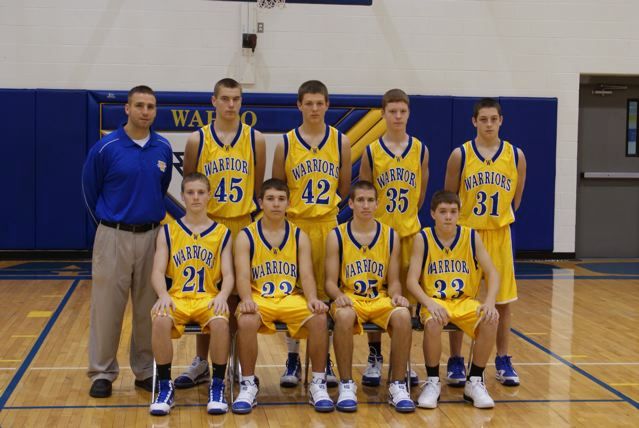